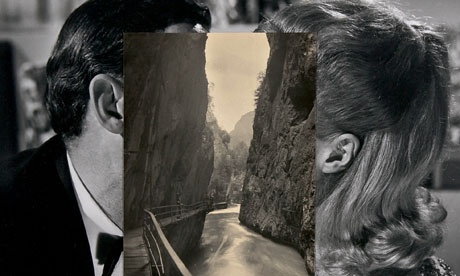 Pair IV, 2007. Writing in the Guardian in July, Adrian Searle said: ‘Stezaker has that great unteachable gift: an eye and a sensibility. Photograph: John Stezaker

John Stezaker, a surreal, funny and often disturbing collagist who unashamedly cuts up other people’s pictures in the name of his art, won one of international photography’s most prestigious prizes on Monday night.

He was named winner of the £30,000 Deutsche Börse prize at a ceremony in London. The British artist, subject of a retrospective at the Whitechapel Gallery last year, may not be a photographer in the conventional sense – in that he does not point a camera that produces images – but he won with “great unanimity” among the judges, said Brett Rogers, director of the Photographers’ Gallery.

“I’m thrilled,” said Rogers. “He really has been unrecognised for such a long time and he is obviously just having his moment. He has been very influential on the next generation and there does seem to be a new generation interested in collage.”

Stezaker takes vintage postcards, film stills and pictures from books and magazines for his work. Some question whether he is a photographer.

“Of course he is,” said Rogers. “He has found his way to use photography to reveal the subversive force of the image; he creates new meanings which can be disturbing and funny and meaningful at the same time.”

Rogers recalled speaking to Stezaker when he was first nominated and he told her how photographers often spurned him at the start of his career, because they thought he was defacing images. “He has come full circle,” she said. “It is also interesting in the digital age with Photoshop, hopefully people will appreciate the hand craftsmanship. If you look at them closely, the way he slices them is so finely judged and that is where his skill lies.”

Stezaker was chosen from a shortlist that also included Pieter Hugo, a South African, Japan’s Rinko Kawuchi and the US photographer Christopher Williams.

The prize is now in its 16th year. Although not a conventional photographer, he is not the first winner to not take his own photographs: Walid Raad, who won in 2007, uses archive images from the Arab Image Foundation for his work.

Stezaker was presented with the award by the artist Juergen Teller, who won the prize in 2003. It came after deliberation by a judging panel made up of artist Martin Parr; François Hébel, director of Les Recontres d’Arles; Beatrix Ruf, director/curator of Kunsthalle Zürich, and Anne-Marie Beckmann, curator of the Deutsche Börse art collection. Rogers acted as the non-voting chairwoman of the panel.

Stezaker, who was born in Worcester and lives in London, teaches critical and historical studies at the Royal College of Art and had been shortlisted for his show at the Whitechapel.

Work by all four artists will remain on show at the Photographers’ Gallery in its new central London home off Oxford Street until 9 September before travelling to the Deutsche Börse headquarters in Frankfurt. Julia Taeschner, head of corporate responsibility at the company, said: “Once again, the four finalists of the Deutsche Borse photography prize have shown important, interesting approaches that reflect the complexity of the European photography scene.”