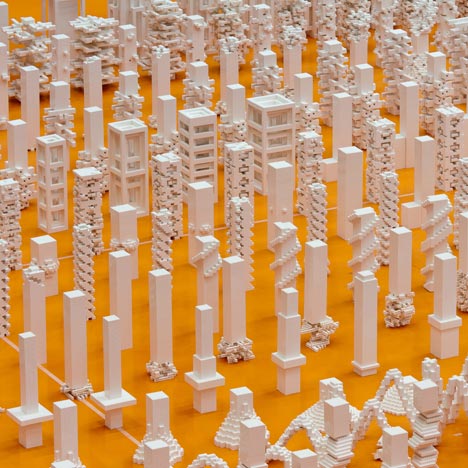 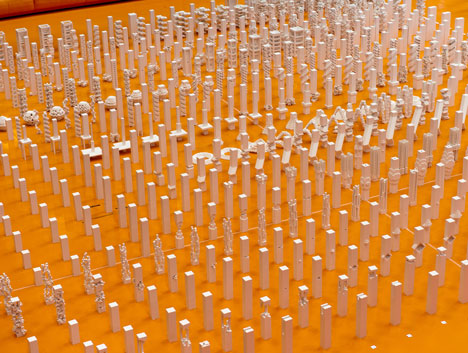 Architect Winy Maas of MVRDV and the studio’s think tank The Why Factory will create 676 miniature LEGO towers at the Venice Architecture Biennale later this month for an exhibition to promote the inclusion of architectural discourse within European Union development policies. Named Porous City, the exhibition will form part of a series initiated by the European Forum for Architectural Policies (EFAP) and will open at Spazio Punch in Giudecca on 26th August.

The architects will also present another exhibition for the biennale, named Freeland, where cartoon animations will highlight the issues of urban planning by creating a series of utopian scenarios.

Here is some more information from MVRDV explaining all of their activities at the biennale:

By invitation of Director David Chipperfield, MVRDV and The Why Factory contribute to the 13th International Architecture Exhibition, entitled Common Ground. The main contribution consists of the collaborative project ‘Freeland’ forming part of the single exhibition in the Central Pavilion at the Giardini. Further contribution is made by Winy Maas and The Why Factory with ‘Porous City’ to the EU CITY Program, initiated by the European Forum for Architectural Policies (EFAP) representing Europe for the first time at the Venice Architecture Biennale.

Presented as an animated documentary on a multi-screen surround projection, Freeland explores the prospects of complete liberation of urban planning. It questions whether classical centralized planning is still needed in times of increased individualization and if instead a self-organized city can be imagined. What can be organized individually and when will we need our neighbours? What are the “minimal common grounds” of our developments? Freeland is rooted in two projects: it combines the practical side of the development strategy designed by MVRDV for Almere Oosterwold with the research on bottom up urbanism addressed by the AnarCity studio led by The Why Factory at TU Delft and the Berlage Institute.

MVRDV’s Almere Oosterwold is a revolutionary model in urban planning as it steps away from governmental dictate and invites organic urban growth, stimulating initiatives by which inhabitants can create their own neighbourhoods including public green, energy supply, water management, waste management, urban agriculture and infrastructure.

The Why Factory’s AnarCity unveils utopian scenarios that fantasize on radical liberated urbanization in different situations and contexts such as the fall of government, climate crises or voluntary anarchism. The movie takes the viewer on a time-travel back to the utopian Freeland. Successes, failures and surprises play out in a series of intriguing narratives.

Besides the main contribution ‘Freeland’, Winy Maas and The Why Factory are involved in additional programs and events of the 13th International Architecture Exhibition at various locations. At Spazio Punch at Guidecca ‘Porous City’, an exhibition of 676 LEGO towers at a scale of 1:000 will be on display at the launch of the EU CITY Program, a manifestation representing Europe for the first time at the Venice Architecture Biennale.

Furthermore Winy Maas has been appointed advisor for the first ever Kosovo entry, and The Why Factory will present the AnarCity movie by the Berlage Institute and launch two books .

‘Freeland’ is a collaborative project by MVRDV and The Why Factory and was made possible by the financial support of the City of Almere. Rotterdam based SYNPLE made the animation. The ‘Porous City’ showcase has been generously supported by the LEGO Group, Denmark.

The Exhibition Common Ground in the Central Pavilion at the Giardini and the Arsenale will present 63 projects by architects, artists, photographers, critics and scholars who have involved other colleagues in their projects with whom they share a Common Ground, making it a total of 110 participants.

The launch of the EU City program will take place on Monday, 27 August at the central venue of the Architecture Biennale. The exhibition Porous City will be opened on Sunday, 26 August at 18.00 at the Spazio Punch, Giudecca 800/o, Venezia 30133, Italia. The 13th International Architecture Exhibition will be open to the public from 29th of August through 25th of November 2012 with previews on 27th and 28th of August.

REVIEW: LEGO Art of the Brick