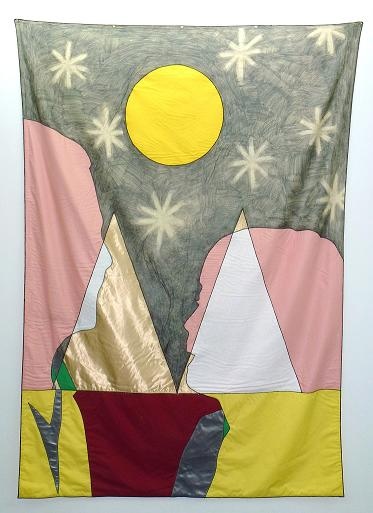 This is the first London solo exhibition of Thomas Webb.

“Watching the plot unfold while walking through Thomas Webb’s studio you can hear the distant echoes of whistling from the bottom of unseen canyons, reverberated guitars that come from the caves of his mind, the galloping of horses whose hooves kick the caked desert earth onto the canvas. Shadowed characters live on these walls, and are trusted companions on your journey through the mind of the artist.

The son of a curtain maker, Thomas learned an appreciation for aesthetics early on. His fascination with fabric, the way it is weaved, its weight, its opacity in the face of the sun, and how it gracefully hangs in the now and in our memory is evident in his pieces. At times abstract, often hauntingly realistic in grayscale form, his work weaves the narrative of a vast, dangerous, desert filled with beauty.

Law is a moot point in Thomas’ work. There is only the human understanding of balanced form. There is a feeling of morality without church. A wolf howling at the moon. A golden face without a name. A sensibility that sees a pistol as a tool, not unlike a spanner. A sober, focused style of illustration. Something strange, a fictional place where natural balance is undisturbed by closed door meetings. It’s the complicated, subjective democracy that we all want but are afraid.”

Thomas Webb graduated with a BA in Fine Art from Kingston University in 2007. His work has been featured in many group shows in London, with a recent solo exhibition at The Usuals Gallery in San Jose, California.