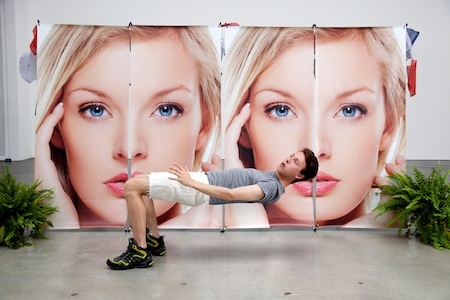 This years programme of artists and commissions realised annually at Frieze London is curated by Sarah McCrory it includes five specially commissioned projects as well as the Emdash Award, which each year enables an emerging artist working outside the UK to present new work at Frieze London as part of the Frieze Projects programme. Frieze Projects is commissioned by Frieze Foundation and is supported by the Emdash Foundation.

This year’s programme of commissioned projects incorporates a number of unique viewpoints of the fair and includes: a programme of performative projects around the relationship between art and food, an immersive and transformative outdoor installation and a putative television crime drama.

The recipient of the Emdash Award in 2012 is Cécile B Evans, whose winning proposal takes the form of an audio guide to Frieze London accompanied by a holographic ‘host’.

Sarah McCrory said of the programme: ‘

This year’s projects vary greatly in scale and pace; there is an examination of the use-value of art by Grizedale Arts and Yangjiang Group in the form of a structure, which will act as a forum and host a number of artists who produce food, chaotic dining events, performance and talks, whereas Joanna Rajkowska’s outdoor work will invite contemplation and reflection. Asl? Çavu?o?lu’s recreation of a crime drama scene will look at the unlikely parallels between the production of murder mysteries and decisions made whilst making art, with artwork functioning as both prop and murder weapon. DIS magazine’s unique approach to the production of imagery will be a response to the fair, and a design by Thomas Bayrle will be dramatically woven into the fabric of the fair.’

Frieze Projects presents newly commissioned artworks by international artists. Offered as an opportunity to work in a unique context, the artists commissioned by Frieze Foundation use Frieze London as a site to realise ambitious ideas in an exceptional environment.