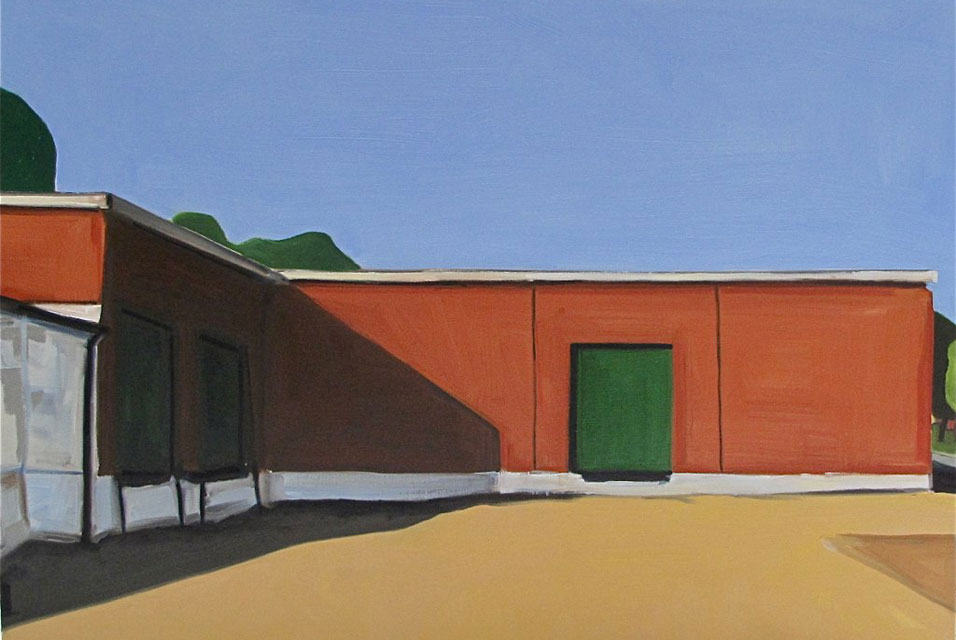 More Information: http://www.artdaily.org/index.asp?int_sec=2&int_new=55793[/url]Copyright © artdaily.org
Walter Maciel Gallery present the first solo exhibition of paintings by Colin Doherty who recently moved to Lexington, Kentucky after 15 years of living in Los Angeles. Doherty’s work was introduced last summer in the group exhibition Size Matters. The paintings for this exhibition were started in January upon Doherty’s arrival to the Commonwealth of Kentucky and reflect his observations and experience living in a new rural community deep within the Ohio valley.

The subjects range from the ever changing moods of the area’s large sky, rolling hills and archaic architecture during winter and spring which starkly differed in comparison to the temperament and contemporary landscape of Southern California. Having spent most of his adult life living near the ocean, the confines of the impending landscape and the unpredictable weather led to a new approach to his painting with a condensed palette and composition restricted to impromptu shapes and carefully selected colors. The motive behind the series reflects his personal decision to move his family to a new community for no other reason than the desire to find comfort in an unfamiliar place. Painting in a dilapidated Victorian home built in 1886 with high ceilings and huge south facing windows, Doherty began translating loose charcoal sketches that were done on site from the surrounding landscape into lively paintings that evoke the emotion of each scene. As an exercise he gathered plant life, grass, bark, dirt and brick from the various locales and put the materials in moonshine mason jars that were then ground into powder using an antique mortar and pestle. The residue was mixed into oil paint with linseed oil that became the pigment used to achieve the rich areas of color and background hues. Each painting literally includes physical matter from Kentucky at the same time depicting its topography. The work is created with a multi-layering process to create depth and mood while illustrating simplified areas of architectural details or minimal scenery.

For instance, in the painting Little Red Rincon an austere barn-like structure is shown stacked up against smaller versions to indicate a sense of scale nestled behind a row of trees on a hillside. The title of the painting references the point break in Santa Barbara that creates one of the best surf locations in the world, hence the stacking of barns to mimic waves as they slam around the point and break, occasionally growing larger as they approach the beach. The palette is limited to six colors consisting of two contrasting versions of green for the landscape, a muted version for the trees, a blue sky and a neutral tone for the buildings topped off with vibrant red roofs. The paint is applied with several layers exposing the heavy brushstrokes mixed with the collected vegetation adding to the overall texture on the surface. The colors exude the sensibility of the afternoon light beating down on the rural landscape as if highlighting a movie set or diorama. The pictorial field opens a conversation with the viewer where the dialogue becomes exploratory as the painting gets more elementary. Doherty worked as a set designer in the television and film industry for fifteen years and continues to commute to Los Angeles for selected jobs. He was born in Atlanta and received his BA in English/Creative Writing from the University of North Carolina at Wilmington in 1992. Doherty is a self-taught painter who did not formally embrace his artistic talents while attending college. In 2008, He opted to explore the process and challenges of painting following the death of his father after questioning his own mortality and lifetime dreams.