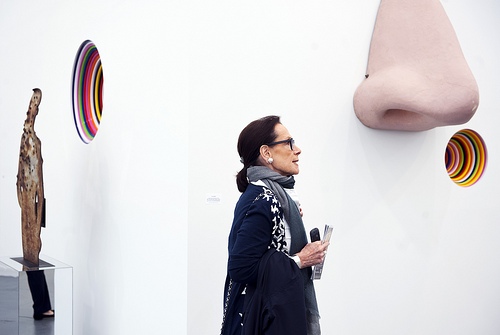 This article titled “New York warms to Frieze as fair muscles in on US art market” was written by Ed Pilkington in New York, for The Guardian on Thursday 3rd May 2012 19.58 UTC

“Attention galleries, the fair will be opening in three minutes!” As the announcement blasts, military style, over the intercom, gallery owners could be seen frantically slapping final dabs of white paint on walls, clearing away ladders, dusting frames and polishing picture glass.

Regular visitors to Frieze, the annual showcase of contemporary art that began from a standing start in 2003 and grew to become an essential fixture in the global art calendar, might be surprised to hear that it is opening in May this year. They would be surprised too by the location: an island in the East river tucked under the monolithic span of Robert Kennedy Bridge (the Triboro Bridge to old-timers).

But then this is not the Frieze art fair of London fame, that will celebrate its 10th year in Regent’s Park in October. This is something new and previously untested: Frieze takes on New York.

Being Frieze, they’ve taken it in spectacular style. The centrepiece is a giant, luminous white tent that slinks along Randall’s Island overlooking the river and uptown Manhattan.

The space, all 250,000 sq ft of it, lays claim to be the longest tented floor in the world into which is packed giant clay noses, video installations, neon sculptures, marble torsos and a vintage car stretched like an unfolding tin can.

The first New York fair is the creation of Amanda Sharp and Matthew Slotover, who co-founded Frieze as a magazine in 1991 above an Islington swimming pool. It is a particular passion for Sharp, who has lived in New York since the late 1990s and has long wanted to make her contribution to its civic sparkle.

“New York has a sophisticated gallery infrastructure, but we wanted to see if we could find a point in the year which brought people to the city,” Sharp said.

Even before it opened, the fair had begun to attract extravagant praise. Milton Esterow, editor of ARTnews magazine, said that despite recent debate over whether there was a glut of art fairs, Frieze New York was drawing dealers from around the world. “Folks are waiting to see how this will go, but judging by the early interest it’s going to be extraordinarily impressive,” he said.

Andre Balazs, an American hotelier, was even more effusive, telling the New York Times that the fair was one of the most exciting things to happen to the city in 20 years.

While the first Frieze fair in London had relatively little competition, the New York spectacle enters an already crowded market, with Art Basel Miami, the Armory Show in New York and the Art Dealers Association of America fair all being established players.

The others are professing not to feel threatened by the interloper. “New York is a major art capital and can support multiple fairs throughout the year,” said Michael Hall of the Armory Show.

Where Frieze hopes to make its mark is in the connection between the professional galleries and dealers, and the art-savvy general public. From Friday morning until Sunday, they hope to lure visitors in their thousands – some 60,000 attend the London Frieze shows – by combining the attraction of cutting-edge art with the feel of a day out at the fun fair.

Water ferries will bring in the hordes, picking them up at 35th Street and giving them a tour of the east side of the Manhattan skyline, passing under the nose of the UN headquarters and the Chrysler building. As the ferry arrives at Randall’s Island the slithering tent comes into view, and sculptures commissioned especially for the fair are on display on the lawn outside.

A third – 60 – of the 180 galleries taking part are American. UK galleries come second with 28, then Germany with 24, and lower down in the league table Japan has five and China three.

Many of the big US galleries are present, including Gagosian which is showing a single artist, Rudolf Stingel; Gavin Brown’s enterprise is showcasing a bunch of hanging chrome sausages by Rirkrit Tiravanija; and David Zwirner which has a Minimalist collection that features Sol LeWitt and Dan Flavin.

Tom Heman of New York’s Metro Pictures gallery said they wanted to come because, although there were many art fairs in America, there were not many good ones. “Frieze has a fantastic reputation and we wanted to be here because in its first year they will get enormous attraction and attendance. They put a lot of intellectual currency into the fair, as well as pull in the public.”

The timing of the fair is not coincidental: New York is filling up with buyers drawn by the big spring auctions of contemporary art. As the sale of Edvard Munch’s The Scream for a record 0m (£74m) at Sotheby’s in New York on Wednesday night demonstrated, the art market is continuing to buck the trend of global economic misery.

Sharp swears though that the enduringly buoyant state of the art market is not her driving motivation. “This had less to do with the market, and more to do with logistics,” she said.

“We’d been considering putting on a fair in New York for some time, but it was only when we found Randall’s Island that everything fell in place.”

The robust market may not be the point of the first Frieze New York. But it certainly helps. An hour after the event opened to dealers, the news came in: all six of Gagosian’s Stingels – voluptuous screen paintings in purple and silver – had been sold.