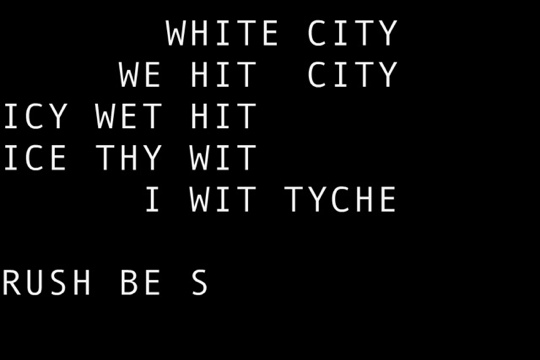 Visitors to White City Underground station are now able to begin their daily commute with a virtual journey with Art on the Underground.

Poster-sized Quick Response codes will line the station, allowing customers to use their smart phones to scan and access videos and text for the latest project in the Central line series by artist Anna Barham. The series, which to date has included projects by artists Michael Landy and Ruth Ewan, has communication and exchange as its theme. This spring will also see Alice Channer’s Hard Metal Body at Notting Hill Gate Underground station.

For her new work WHITE CITY, Anna Barham has embraced both the functional side of QR codes (graphic storage devices, which can be accessed by smart phones) and their pixelated form. Barham has inserted images in place of the solid colour of which the codes are usually made up. The images are linked to the location: an Iris flower called White City and Tyche, the Greek goddess of chance and fortune, often depicted with a mural crown or a ‘white city’ on her head.

When scanned, these QR codes take the visitor to a series of text and video works. Two of the videos animate anagrams of the names of east and westbound stations along the Central line. Letters flicker on a black or white background, forcing the viewer to grasp at words and find some meaning in the combinations.

This ‘portable’ part of the project exploits the increasing use of smartphones to watch movies and video clips online. The phone screen gives a jewel-like quality to the videos and an intimacy and “one to one aspect” of viewing them, which is important for the way in which Barham wants people to experience the works.

Barham’s exploration and manipulation of the QR codes is a development of her interest in text and language and its flexible, imprecise nature, which she uses like a building material that can be constantly reconfigured into new combinations that make sense in a plurality of ways.

Tamsin Dillon, Head of Art on the Underground, said: “I’ve been intrigued and excited by Anna’s proposal since she first talked to us about it – particularly the way she is using very new technology in the form of QR codes as works of art in themselves and as a vehicle to take the viewer to the films she has made for the project. I’m sure people will enjoy the multiple layers of this work, from the anagrams of all the stations on the Central line to the subtle images embedded in the posters at White City station”.