Bauhaus: a blueprint for the future - FAD Magazine
Skip to content 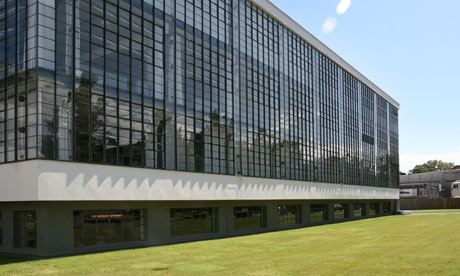 This article titled “Bauhaus: a blueprint for the future” was written by Rowan Moore, for The Observer on Friday 13th April 2012 10.55 UTC

Not much united Walter Ulbricht, the Stalinist dictator of East Germany for two decades, and Tom Wolfe, celebrant of the splendours and follies of American capitalist excess. Not much, except a loathing of the Bauhaus and the style of design it inspired. Ulbricht called it “an expression of cosmopolitan building” that was “hostile to the people” and to “the national architectural heritage”. Wolfe called it “an architecture whose tenets prohibit every manifestation of exuberance, power, empire, grandeur or even high spirits and playfulness”.

For Ulbricht it was alien to Germany, for Wolfe it was alien to America. Both agreed that it was placeless, soulless and indifferent to ordinary people’s needs. And if the Bauhaus attracted such consistent forms of hostility, that is due to the power and coherence of the image it presented to the world, of disciplined and monochrome modernist simplicity, usually involving steel and glass. Given that it was actually a short-lived and semi-nomadic school of design and art with the usual riot of individualists, visionaries, eccentrics, schemers and geniuses that such places attract, this appearance of unity was an achievement.

From May the Barbican is staging an exhibition of 400 of the Bauhaus’s works, the first in Britain on this scale for 44 years. It will stress the breadth of its output, including paintings by Paul Klee and László Moholy-Nagy, furniture by Marcel Breuer, textiles by Gunta Stölzl, architecture by Walter Gropius and Mies van der Rohe, photography, film, ceramics, theatre, graphics and product design. It promises to portray the central ideal of the Bauhaus, “to change society in the aftermath of the first world war”, as the Barbican puts it, and “to find a new way of living”.

When Walter Gropius founded the Bauhaus in Weimar in 1919 it was with these aspirations for a new life, and for a multiplicity of creative disciplines, together with a stress on the importance of making things as opposed to just theorising about them. But there was not yet a distinct form or direction to these ideas, and almost anything could be considered as a route to a better future, including new spiritualist religions and a strict vegetarian diet which had to be livened up with plenty of garlic. According to Gropius’s spectacular wife Alma, whose other husbands and lovers included Gustav Mahler, Oskar Kokoschka and the writer Franz Werfel, the most distinctive feature of the Bauhaus in its early days was garlic on the breath.

Certain questions were unresolved and intensely debated. Was craft or mass production more important? Could art and manufacturing be reconciled? Did individual expression impede service to society? In 1925 the school moved to Dessau, between Berlin and Leipzig. At the time it was an industrial boom town, the base of the Junkers aeroplane company. The harder-edged, more technocratic arguments started to prevail. The young Marcel Breuer started collaborating with Junkers on making tubular steel furniture of a kind that would eventually become commonplace in boardrooms and forward-thinking homes. Greater attention was paid to the commercial development and marketing of Bauhaus-designed objects.

In Dessau they built, in the extraordinarily short time of one year, the Gropius-designed building that became as famous as the institution it served. With its glass curtain walls and spare rectilinear forms, it crystallised what would become the dominant type of modernist architecture. It was one of the most prodigiously influential buildings of all time, a prototype that would be followed by office buildings, hotels, schools and hospitals in almost any country you can think of. In Dessau, Gropius and his followers could also try out other architectural ideas on the row of houses built for Bauhaus masters, and on 300 low-cost houses built for industrial workers on the Dessau-Torten estate.

In 1932, however, the school moved on again, to Berlin. The next year it fell victim to the National Socialists – another movement that, after the catastrophic trauma of the first world war, sought a new order and expressed itself through memorable visual imagery. Junkers started making Stuka divebombers, not Breuer chairs, and Dessau was all but flattened by bombing in 1945. The Bauhaus building was severely damaged, and only recently has been fully restored. But its influence spread. The Bauhausler diaspora, of ex-students and teachers building in the style they had learned, extended to Tel Aviv and Tokyo. Gropius migrated via London to the United States, where he became a professor at Harvard and designed the Pan Am building above New York’s Grand Central station, much disliked for the way it imposed on the view down Park Avenue. He also designed the Playboy Club in London, prompting a new generation of radicals to denounce him for selling out.

To visit the Bauhaus building now is to be struck again by the extraordinary way in which a single construction in a provincial town could have had so much effect. It is also to see nuances that, inevitably, imitators lost. For years the Bauhaus building was known to the wider world mostly through a few black-and-white photographs that stress its more easily copied details, but miss the point that it was a framework for the creative energy of the school. Its stairs, workshops and balconies were places of display as well as function, and its glass walls made a spectacle of its internal activities. One of the key spaces was an auditorium whose stage is connected to the communal canteen, thereby bringing together performance and life. It also has a subtle colour scheme, contrary to Wolfe’s assertions that the Bauhaus was only interested in black, white and grey. If it looked like a factory it also had properties of a commune, a cult centre and a theatre.

Although it was founded by Gropius, architecture was not at first the main point of the Bauhaus, and its vast legacy extends from graphics through product design to art. But architecture came to dominate the public image of the place, and the style of the building proved easier to record than the events that happened there. What Wolfe and Ulbricht railed against was its impact on the built environment. Which, if you only look at its form and not at its content, does indeed look sterile. Hopefully, the Barbican show will put this misconception right.

As for Alma, she tired of the work ethic of her husband and his school. At least if Tom Lehrer is to believed. As “Alma”, his tribute to her, has it:

But he would work late at the Bauhaus,

And only came home now and then.

She said, “What am I running? A chow house?