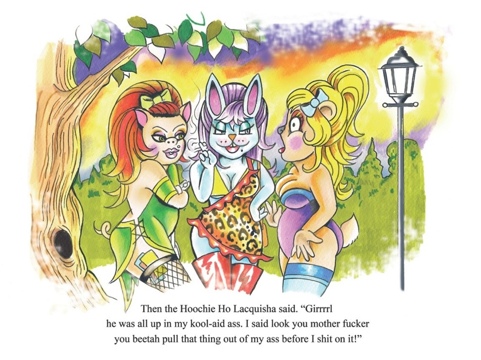 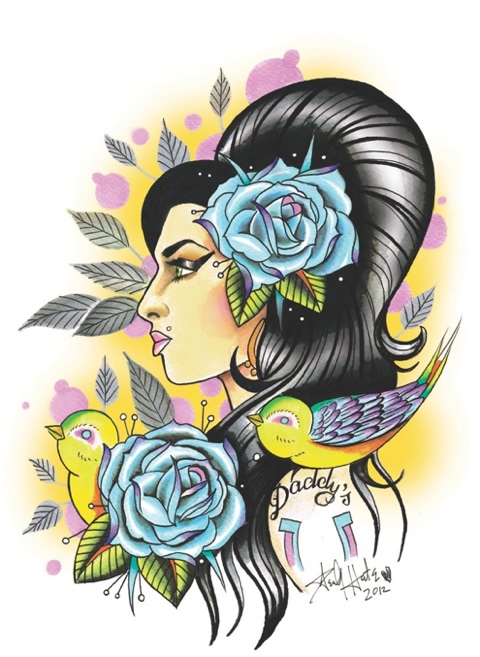 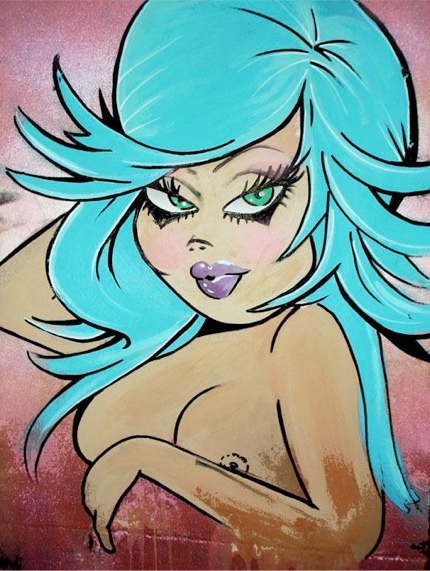 He is currently re-focusing his career towards painting and the following interview explores the transition from tattoo artist to fine artist.

Why the interest now at this point in your life in pursuing fine art?
I know that when I’m 60 I don’t want to be tattooing people and then be in the situations that can happen in tattooing that doesn’t happen in fine art. If someone doesn’t like your painting then they don’t buy it, they can walk away from it but sometimes you put hours into something and someone virtually just goes into the defensive. And then you have that creative temperament that you are trying in earnest for something you believe in and just because of an opinion, it’s completely swiped. In essence what I have now is the clientele that simply wants certain work. So at this point in my life there are certain things I want to say more and to be able to have that freedom, which in a sense, would kind of level me out.

How has your work changed since moving to London?
It’s actually a lot broader now. I think when I was younger I was more into figurative and into Mel Ramos, the focus on one person and allowing the imagination to go wild – you can fill in the blanks. And that’s what also struck me about Warhol, the portraits and the single study.

Now I have started looking at 17th Century Dutch paintings and their use of dark and light and that sense of photorealism that is quite stunning. Its something that I think, how can I transfer this to a tattoo or a painting?
I used to want to make really cool pictures that just shocked people, but now I just want to tap into things that effectively are important to me and that I want to bring to the surface. Not to say I am a tortured artist, but I want to paint memories from my childhood.

Describe your current body of work and what it’s all about.
Right now I am fascinated with religion as a subject. I am trying to create a piece called “The Practice of Sexual Urges” for a show in West Bank and it will be a phallus, but also a torture device. I am interested in that whole representation of Catholic guilt and the pleasure of sin and the thought that if you punish yourself you can erase all sin, but really it just keeps the neurotic cycle going.
I also like the geometric shapes of people. When I look at black women I think of airplanes, when I see Asian, Oriental women, I think of porcelain. I try to think of ways to portray those objectifications, but not in a bad way; in a Post Modernist way. Now, it’s less about eroticism and more personal.

Are you inspired by the street art in Shoreditch, where your tattoo shop is?
No, I’m not. I wish I could say I am, but its more part of the backdrop than the epicenter. That’s not to say that I don’t appreciate street art, but I detest tagging. I dig micro tagging, where they draw little pictures in the most random and weirdest places. My eye is always wandering and I pick up on the small things. That I find quite cool.

I think that now that street art and tattoo art has developed, you have to be more clever in your approach. I don’t believe in this whole “sticking it to The Man,” I am all in favor of the DIY work ethic, but I think that there comes a point where you actively think ‘I can make a lot more difference being inside the circle than bitching about it.”
That’s where I am at now. I would like to contribute.

What art galleries in London do you find inspiring?
I really do enjoy The Serpentine Gallery and I do like the Tate Modern. I saw the Yayoi Kusama show. She is amazing. I have always been more into thrift store kind of art, like Michael Keane and dog paintings with sad eyes. I think that’s from me growing up and not being able to afford newer clothes and always going into these thrift stores and seeing these paintings, some of which were really cheesy. They became highly collectible and I think thrift store art is quite cool.

What materials do you enjoy working in best?
I enjoy pencil. I have been working with gouache and acrylic. I have always been afraid of oils. I’ve tried to do the oils, but I think because I want to make things “now, now,” I like to see a direct result. I am also enjoying digital right now, using that as my base and then go over it in paint and drawing on it. I use Photoshop and Illustrator. I like the idea of mixed media in a body of work.

Do you have a quotation that you keep coming back to and that keeps you going?
There was one recently from Vivienne Westwood where she said that you should ignore the Tate Modern because it’s completely superficial. I thought that was brilliant! I like Banksy’s “mind the crap.” And I like the poem ‘Inventory” by Dorothy Parker –“ Four be the things I am wiser to know:?Idleness, sorrow, a friend, and a foe.??Four be the things I’d been better without:?Love, curiosity, freckles, and doubt.??Three be the things I shall never attain:?Envy, content, and sufficient champagne.??Three be the things I shall have till I die:?Laughter and hope and a sock in the eye. “

What are your goals for the next couple of years artistically? What’s next for you?
Well, I hope to provide you with some amazing work that you can show in your gallery. I have this upcoming show where I will be exhibiting three works at West Bank. I am trying to figure a way to free up my tattooing schedule to do more fine art and really commit to that. That way I can gravitate into an area where I want to be and I am very dedicated to my art. I would like to spend more time outputting the things I have in my head, putting them onto paper, canvas or even a shirt. 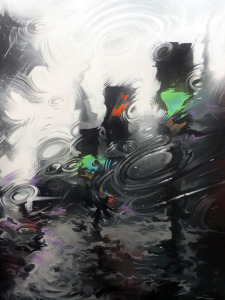 Street Art Auction at Houses of Parliament plus a Richard Long and a Picasso ..

I always seem to bump into the brilliant Connor Harrington near Brick Lane. I’m often massively jet lagged and frothing at the mouth so I’m not too sure what we talk about though.