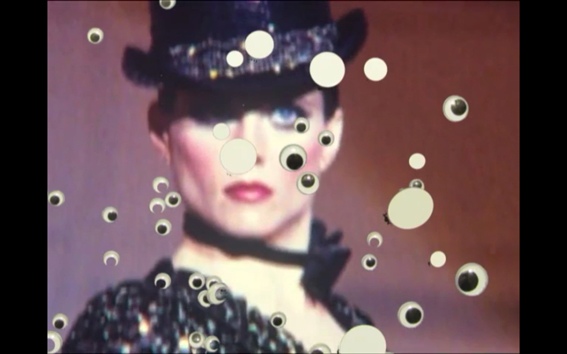 Baga is a young artist working mainly in video and performance. In terms of technology, plot and resources however, her approach to making is inclusive, playful and highly improvisational, so that her practice begins to unfix such distinctions. Though precarious by its nature, this tack also thrives on the possibility that arises when everything around becomes potential material for narrative making.

Named after the historical Pilgrim landing site in Massachusetts, the video installation Plymouth Rock sees Baga attempting to sympathise with it as a body that has been broken up. She considers how this degradation has happened both physically, as it has traveled, but also in terms of its subjection to layers of human meaning over time. The work consists of a video projected on to a collection of paintings and objects in close proximity to one another. Conveyed through various mediums, the piece will also feature other antagonists such as voice, the sea, lines and colours. Like the act of looking, the video becomes potential body, or carrier, for these disparate elements and forces. As its projection either illuminates or disregards them, the idea that they might finally come together to form an affective and harmonious composition is suggested and retracted in turn. A state of rhythm and beauty is desired yet perpetually disaggregated, not unlike the fate of the rock itself. Baga’s fantastical videos are characterized by an approach to narrative that is open and intuitive. Here, tangential ideas on the rock’s ancient origins as part of Africa are pursued, as well as its progressive relocation to tourist attraction pelted by coins, mugs and rubbish. Furthermore, she also gives over the film’s structure to her understanding of the sequence of events at Plymouth Rock as an applied mathematics. Hard Rock on the other hand is a 3D video projected onto objects and ceramics on the floor with a 3D image of a rotating cardboard box above them. Here Baga looks at how the 3D projection on top of the objects works to negate their real objecthood whilst the representation of the cardboard box above them only appears more monumental.

Throughout her work Baga’s interests lie with the “common things” that surround us, using these, enthusiastically, to guide phenomenological compositions about the act of looking and recognizing and the potentiality that might lie in the gap between. Her work could be described as foregrounding distraction as a methodology. The screen of her videos often becomes a surface in its own right. Rarely treated with preciousness, filmed footage becomes rather malleable as it is covered with objects and filmed again, subjected to screen effects, split, mirrored or flipped around to reveal a different surface, a different world, beneath. As such her approach to narrative might be compared to the logic of browsing online and hyperlinks, and is one that admits the space to drift, notice and find, with technological processes charting her course as she goes. 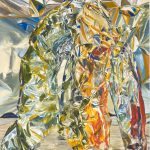 The well-respected Ibid, Limoncello and Vilma Gold galleries have closed their London spaces, in what may be a watershed moment for the art business.