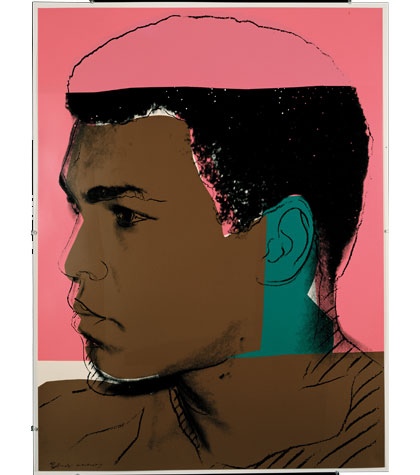 This sumer Dulwich Picture Gallery will be staging Andy Warhol: The Portfolios, Bank of America Collection. The exhibition will focus on the period 1962-1984 during which Warhol focused almost exclusively on the silk-screen printing method. This is the first time the exhibition of 80 works from 13 portfolios has visited Europe. The exhibition will include some of the artist’s most iconic imagery, including portraits of Muhammad Ali and Marilyn Monroe, the artist’s self-portrait, still-lifes, and mythical or heroic figures such as Superman.

The exhibition is curated by Dulwich Picture Gallery and was originally conceived by Bank of America’s Senior Curator, Lillian Lambrechts. Through his use of colour, design and form, Warhol transforms pre-existing imagery, making ‘multiples’ to portray subjects as diverse as famous faces, still lifes, and animals in danger of extinction. Many of the prints share similar subject matter with works in Dulwich Picture Gallery’s own permanent collection, providing a modern take on themes treated by Old Masters. Warhol based his Vesuvius (1985) print series on a painting from the early 1800s by the Neopolitan artist Camillo de Vito, Eruzione del Vesuvio. This was not the first time that he created paintings and prints from historic works. Making Pop Art from historic art was yet another way that Warhol mined the culture around him for imagery and ideas.

The intimate proportions of Dulwich Picture Gallery provide a very different environment for viewing such an exhibition. At Dulwich the prints will be hung decoratively, densely packed, more like an 18th-century ‘print room’ than the usual sparse hang of the ‘white box’ contemporary gallery space.

The effect will be very striking: a riot of colour and image. Ian Dejardin, Co-Curator and The Sackler Director of Dulwich Picture Gallery, said: “Andy Warhol: The Portfolios is the perfect exhibition for the Olympic summer. Visitors will be flocking to Dulwich Picture Gallery to see some of Warhol’s most dazzling prints on paper – not just the familiar icons but also some lesser-known surprises – right here in South London. This will be Warhol as you’ve never seen him – a decorative feast of Pop on the August walls of England’s oldest gallery!”

These iconic images are part of the Bank of America Collection, which is one of the most diverse corporate art collections in the world. They have been made available to the Dulwich Picture Gallery as part of the company’s Art in Our Communities® programme. This unique initiative enables museums and non-profit galleries around the world to borrow complete or customised exhibitions at no cost, guaranteeing that the collection is shared with as wide an audience as possible Portfolio series featured in the exhibition will include Campbell’s Soup II, Flowers, Space Fruit: Still Lifes, Endangered Species, Myths and Ten Portraits of Jews of the Twentieth Century.

The Myths portfolio (1981) is perhaps the most intriguing series, based on photos taken by Warhol and produced six years before his untimely death in 1987. Further highlights of the exhibition will include images as diverse as the Wicked Witch of the West, Superman, The Marx Brothers and Franz Kafka as well as Keith Haring’s portfolio Andy Mouse (1986), created as an homage to Warhol, and a haunting photograph of Warhol taken by Robert Mapplethorpe in 1986.