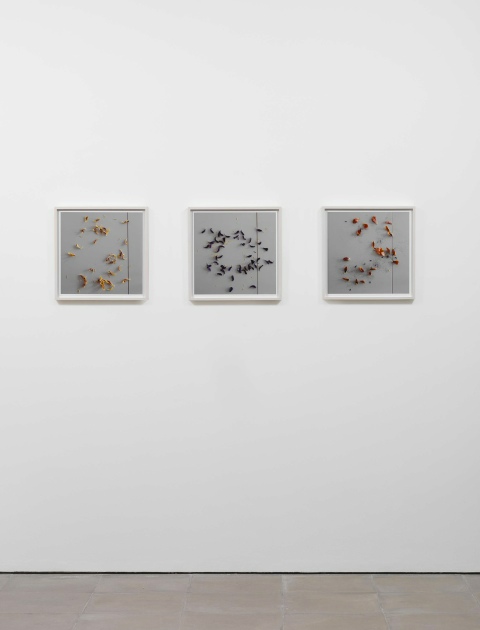 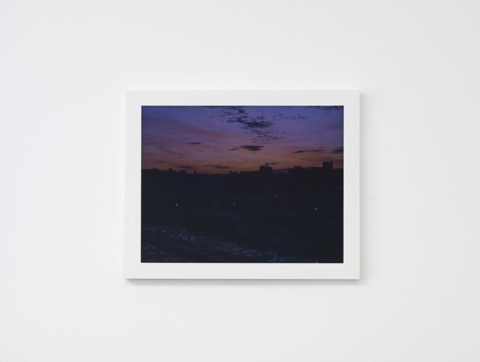 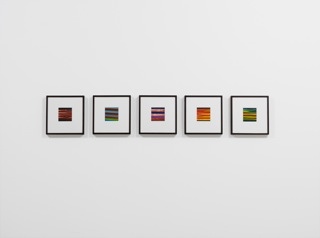 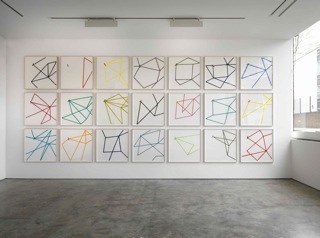 Paths through the Studio 2012.

This is Spencer Finch‘s second exhibition at Lisson & he has made the works specifically for the gallery, most particularly “a discrete architectural space” and for the time the show is on, a month. All the works derive from a two month period when the artist was alone in his Brooklyn studio, deciding to get back to basics and to “make something out of nothing”. It is perhaps pertinent to Spencer Finch’s practice that he spent a year in the early 80’s in Osaka, Japan, there is a stripping down to essentials, a straight focus on an idea and a deceptive simplicity of execution.
The works relate to time, light and temperature, plus there is a story to each one in a small booklet, where Spencer Finch explains the logic and methods behind each work. So we learn that he used 68 thermometers to track the heat on his studio window; that when he had finished logging the flight of annoyingly aggressive bees in his porch, he killed them; that it is important to him that 11 snow flakes fell on the paper “as it is a prime number”; and that the fallen tulip petals are missing their vases because they remind him of “the chalk lines that police draw around bodies that are fallen from buildings”.

What else, well, during the talk given at Lisson, he pointed to a small corner of red in ‘Studio Window’ and revealed he loves that colour. In fact the colour of this work is a false colour coded system to show the invisible, heat, whereas the lines of bee flights are a false colour system to show the visible paths. In both cases the choice of colour could be termed aesthetic, although Spencer Finch was clear – he is neither an abstract painter, nor a representational painter. The sequential work Studio Radiator (Thermal Images) is a great illustration of his pragmatic methodology. First stage: deciding to do ‘bad drawings’ and turn these into ‘good drawings’. Next stage: burning the unsuccessful drawings in order to photograph with a thermal camera, the idea being to work from these photographs to make ‘excellent drawings’. However he felt these were worse than the drawings burnt. So, as he had rented the thermal camera, he photographed everything he could in the studio and the resulting work is the radiator thermal ink jets. Along, with a ‘Sunset from the Studio Roof’, where he manipulated the sky colours with filters, to be the “exact same colour of light that I measured on the roof”, he is seeking a “new reality” of how to experience light.

Because the works are made for the specific gallery space, scale plays in important part in the show. A view of ‘Darkness’, not NO light but a neon light box of dark’s colour at a specific time, fills the large downstairs room and a night time scenario, of a passing light glancing through a window, ‘Paper Moon (Studio Wall at Night)’, is a wonderful use of a room set slightly apart from the main gallery. All in all, a show which although needs some time to get and it does not reveal its strength immediately, is worth every minute, and definitely read Spencer Finch’s words, they are an essential layer to the works.