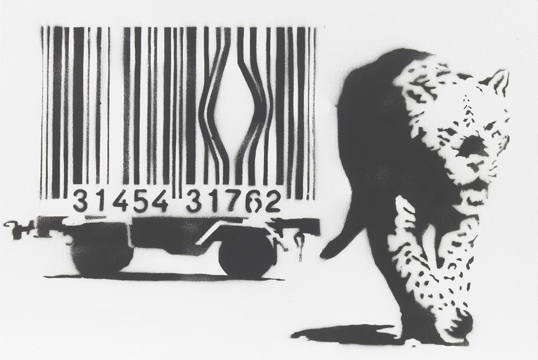 Leopard and Barcode by Banksy, is to be sold at Bonhams, New Bond Street, as part of its Urban Art Sale on 29th March 2012. Acquired directly from an exhibition entitled Existencilism at the 33 1/3 Gallery, Los Angeles by the present owner, this is the first time that the work has been seen at auction. One of five editions and signed Banksy on the reverse, it has attracted a pre-sale estimate of £60,000 – 80,000.

The sale features seventeen works by Banksy in total, with several outstanding originals.
One of the highlights is Girl and Balloon, 2009 (estimate £15,000 – 25,000), which has been sprayed on to the cardboard backing of an Ikea frame and is inscribed ‘Quality’ by the artist on the retailer’s label.

Alan Montgomery, Urban Art Specialist at Bonhams, says: “Banksy’s popularity still goes from strength to strength, with the market for his work certainly following suit. We are excited to be offering this group of works, which includes some of his best known and most sought after images. It seems that the public just can’t get enough of him, and his continued anonymity, even following last year’s Oscar nomination, only adds to his enigma. Increased international interest means that he is no longer just collected in the UK, but now has a truly global following.”