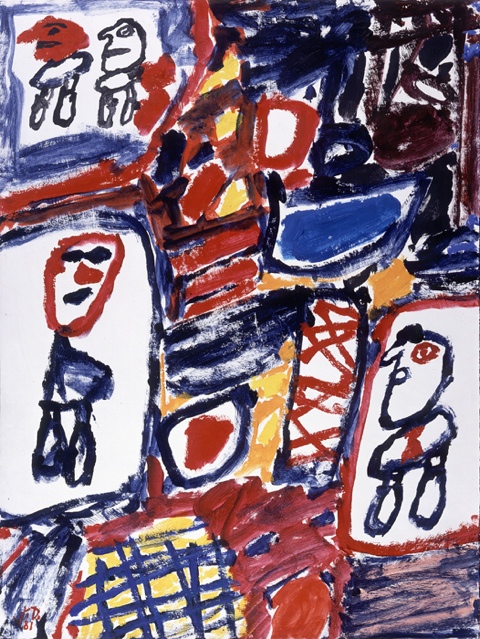 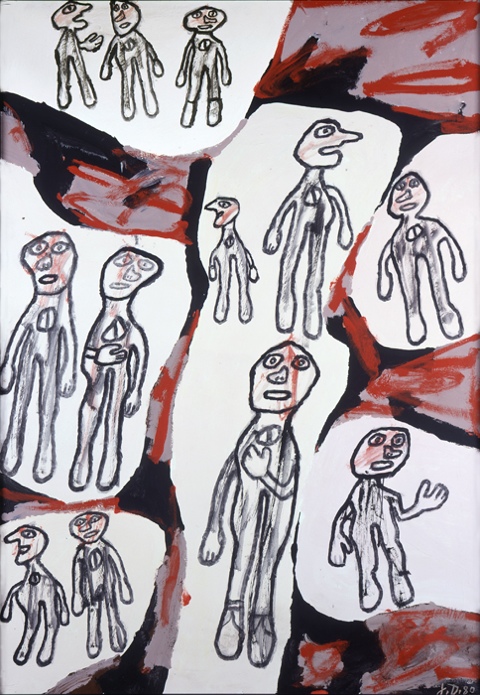 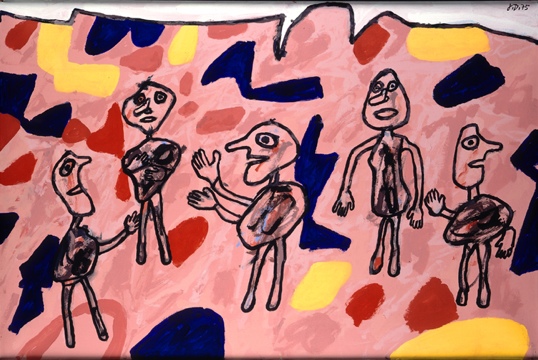 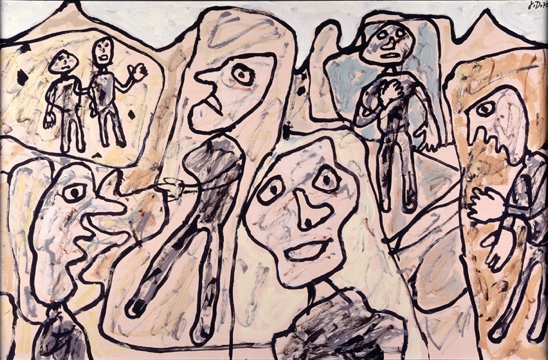 Masterpieces from the last decade of Jean Dubuffet’s life, never exhibited before, will go on show at Waddington Custot Galleries in March 2012. This is the first major solo exhibition in London devoted to the artist since 2000.

Organised with the help of the Dubuffet Foundation, this exhibition reveals the conclusive shift in style and technique that occurred during Dubuffet’s final years, where he reverted to strong colours and basic imagery, depicting figures and spaces with no identifying features. The works on display have been selected from five major series: Lieux abrégés, Théâtres de mémoire, Partitions, Psycho-sites, and Sites aléatoires.

At the centre of the exhibition is ‘Site aux disjonctions (T330), 3 septembre 1977’, one of the artist’s collaged paintings from the important Théâtres de mémoire series lent by the Dubuffet Foundation. The Théâtres de mémoire were created from cut-up sections of the earlier Lieux abrégés series from 1975, which Dubuffet had piled up around him on the floor. When it became difficult to move these sections around on the floor, Dubuffet used a large metal sheet on his studio wall to arrange the cut-up papers. He fixed magnets to the back of bits of collage so he could move them around on the metal, creating multiple images without a central focal point. The Théâtres de mémoire works present an instant in our thoughts, where various images are juxtaposed, the past and the present becoming confused in our mind, as often happens when we have visual memories.
In 1981, Dubuffet produced over 500 Psycho-sites. He worked on them hastily, concentrating on colour and featuring multiple figures with different proportions. Most of these paintings are highly colourful and show isolated figures in separate locations, denoted by blocks of different colours. These figures, like certain examples in the earlier paintings, have no individual facial identities. The Psycho-sites are full of intuition and vitality, foreshadowing the final two years of Dubuffet’s work, where the human figure has completely vanished.

Dubuffet was one of the most creative artists of the twentieth century, using a range of different mediums such as butterfly wings, sponges, polyurethane paint, polystyrene sculptures and volcanic lava. Throughout his career he created massive sculptures and architectural projects and used thick oil and acrylic paint to produce matter paintings. His innovative use of media and research into ‘Art Brut’ has inspired several artists after him.

About The Artist
Born in Le Havre, France in 1901, Jean Dubuffet began studying art at the Académie Julian in Paris, before leaving school in 1919 to pursue an independent form of art education. Like many of his generation in Europe in the wake of World War II, Dubuffet sought artistic authenticity outside of tradition, in the margins of society. He looked to the art of prisoners, psychics, the uneducated, and the insane to liberate his own creativity and coined the term ‘Art Brut’, a predecessor to outsider art of the late 1940s.

About the Dubuffet Foundation
In 1973, Dubuffet established a foundation to preserve a significant group of his works and make them accessible to the public. The Foundation is located in Paris and in Périgny-sur-Yerres, where the Closerie Falbala, a monumental sculpture and the artist’s major work (designated a historic monument in 1998), is situated, surrounded by the former sculpture studios that house the artist’s architectural models. The objective of the Foundation is to acquire and conserve the original work which make up Dubuffet’s collections including; plans, designs and models, notes and manuscripts, all archives, documents, property and diverse items which are of interest in regards to Dubuffet’s knowledge and thought, and also to his artistic, literary and musical work which it protects.

Monumental work by Jean Dubuffet to be installed at Smithson Plaza