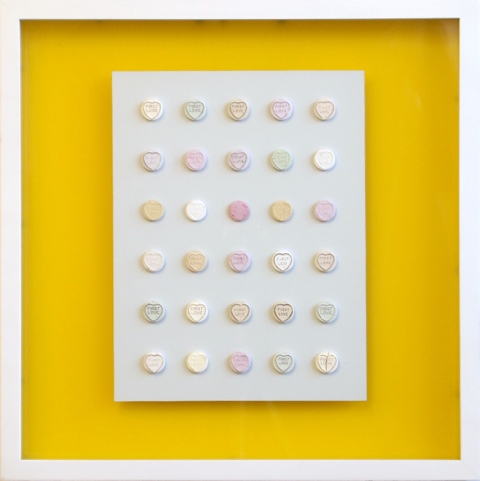 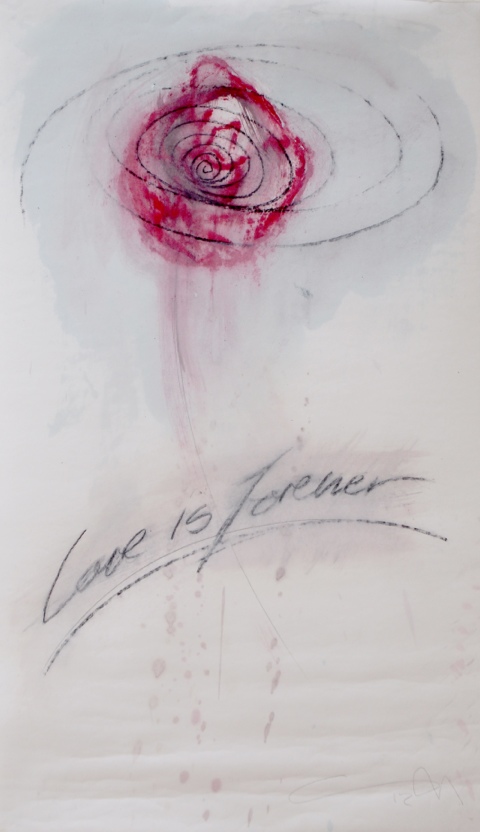 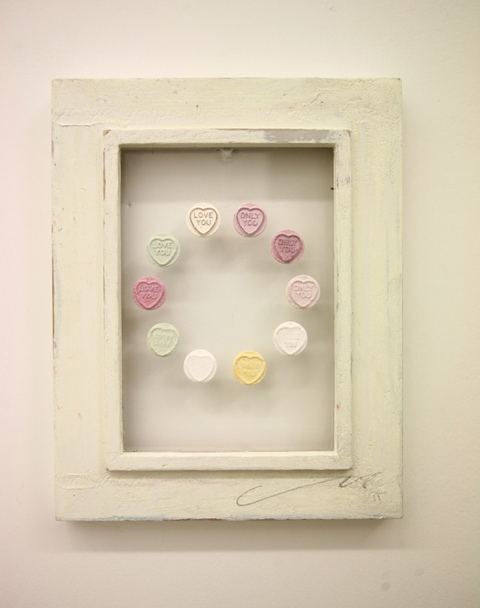 Only You Chris Moon

1.If you weren’t an artist, what else would you be?
A drunk builder.

2. Can you tell us more about your work and what are the main ideas you would like to express?
For the Full Rabbit show i am working in a more conceptual approach swapping paint for love heart sweets to illustrate one man’s historic shortcomings and most of the time destruction of love, kind of like playing the blues with confectionery.

3. How do you start the process of making work?
It starts with the head and ends with the hand and everything in between.

4. Do you consider the viewer, when making your work?
Always but never.

5. Name 3 artists that have inspired your work?
I’m not a very good fan and tend not to have heroes, it’s more certain work excites me which is plucked from body’s of work, at the moment it’s Picasso The Fall of Icarus, Jean Michel Basquiat’s She Installs Confidence and Picks His Brain like a Salad, Micheal Andrews packed figurative works, Paul Rebeyrolle’s nudes and and there’s a piece called Les Oréades from William Adolphe Bouguereau which i will attempt to recreate for my next painting show.

6. Name 3 of your least favourite artists
There’s probably loads out there, i just don’t spend my time like that, I haven’t got a lot of time for people who try to confuse and alienate with their institutionalized intellect and really dumb work that says nothing, everything in between’s alright .

7. What defines something as a work of art?
Generally art is made with the intention of stimulating thoughts and emotions, it’s a method of story telling where the artist is present in some way, not an illustration of objects.

8. In times of austerity, do you think art has a moral obligation to respond topically? Great works tell stories of a time so you can look back and have a feel for the period so anything that happens around you can be used as a response. Increasingly art is becoming the only way of self expression that doesn’t get edited or controlled so the only obligation is to give an escape from our reality, be it a strict economy or not, if being topical floats your boat then there’s plenty of inspiration out there but most great works tell this naturally rather than a forced reaction.

9. Anytime, any place – which artist’s body would you most like to inhabit?
Still trying to work me own out .

10. What is your favourite ‘ism’?
Surrealism

11. What was the most intelligent thing that someone said or wrote about your work?
I was interviewed by John Paul Pryor recently – he flattered me.

13. Which artists would you most like to rip off, sorry, I mean appropriate as a critique of originality and authorship?
I think some works creep in but you should use it as a reason more than a rip off, got to make your own path so gonna say none.

14. Do you care what your art costs? State your reasons!
Money doesn’t interest me or drive me – that’s someone else’s muse.

15. If Moma and the Tate and the Pompidou wanted to acquire one of your works each, which would you want them to have?
Haven’t made them yet – they’re still rolling around me brain.

16. What’s next for you?
Just secured a space for October so working on that as soon as the Rabbit is done.
It’s gonna be a celebration of my preferred medium of paint and how i use and manipulate it. It’s a big space so i can really stretch me legs. 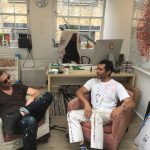 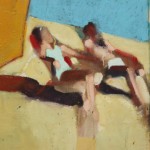 In his third solo body of work, A Splendid Isolation, artist Chris Moon invites the viewer on a road trip to California and beyond.

Full Rabbit is a group exhibition featuring the works of UK and Chinese artists, examining the notion of fortune.