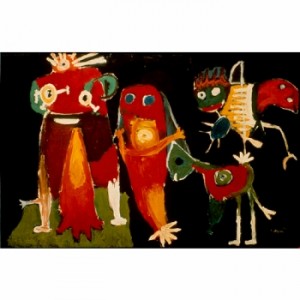 This article titled “Dutch artist’s works found in British warehouse” was written by Dalya Alberge, for The Guardian on Tuesday 14th February 2012 18.46 UTC

More than 400 works of art by a celebrated 20th-century Dutch artist have been found in a British warehouse a decade after they disappeared, leaving the artist distraught.

Karel Appel, a leading expressionist, died at 85 in 2006. He never recovered from the loss of a lifetime’s worth of drawings, sketches, notebooks and other works believed to be worth hundreds of thousands of pounds.

The warehouse was bought by a UK storage and logistics company before Christmas and, in clearing out the contents, staff came across eight boxes filled with artworks. There was no documentation and it was not until a warehouse employee researched the name Karel Appel, whose notes and signatures appear on most of the works, that the company realised the boxes were worth more than mere salvage.

Unaware of their real significance, but intrigued, a manager took some 30 drawings to Bonhams, the auctioneers, to be valued. To their astonishment, they were told that these were on the Art Loss Register’s (ALR) computerised database of “most wanted” stolen art.

Christopher Marinello, ALR’s lawyer and chief negotiator, said: “After five weeks of intense negotiation with the logistics company … a settlement was finally reached with the company agreeing to release their claim to the artwork.”

Appel was a painter, printmaker, sculptor and ceramist awarded the Unesco prize at the 1954 Venice Biennale. Represented in the Tate and other public collections, he was a leading member of the avant garde Cobra group (1948-51), particularly interested in the art of children. His paintings are admired for their thickly-painted, swirling depictions of grotesque animals and humans.

Many of the stolen drawings were experimental ideas for works that Appel never realised. The collection had disappeared in 2002 en route from his studio to the newly created Karel Appel Foundation in Amsterdam. The loss was immediately reported to the police and the ALR.

Marinello praised Bonhams for behaving responsibly. The ALR was appointed to represent Appel’s heirs and the Foundation, who quickly confirmed their interest in recovering the works.

The artist’s widow, Harriet Appel, has identified the works. She said: “I am extremely happy that the Karel Appel Foundation have recovered the lost drawings and am impressed by the successful and professional way in which this case was handled by the ALR.”

The foundation is particularly delighted as the missing drawings will now be added to “a more correct and complete” catalogue raisonné of the artist’s works on paper.

The logistics company declined to be identified or contacted.

Logistics companies often store and move valuable art every year, but they rarely check with the ALR, Marinello said. He noted the problem of many owners “reluctant to perform due diligence searching, for fear that they will lose business to competitors who may guarantee a more discreet service”.

He added: “Unless … fine art storage and shipping companies … agree to police themselves, it may be necessary to push for legislation requiring [more transparency].”