Thin line between art and hate: is this the most repellent work of modern art? - FAD Magazine
Skip to content 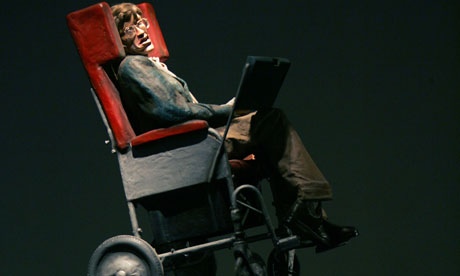 This article titled “Thin line between art and hate: is this the most repellent work of modern art?” was written by Jonathan Jones, for theguardian.com on Thursday 12th January 2012 14.46 UTC

What is the most detestable, the most repellent, and the most pointless work of art you have ever seen?

This week I remembered the most hateful work of modern British art, and maybe a candidate for the most repugnant of modern times. In the 1990s, when British artists became renowned for their readiness to shock, there was one work that fell over the cliff from provocation to plain ugly stupidity.

I recalled it, darkly, this week as I read about 70th birthday celebrations for the scientist Stephen Hawking. Against all odds, Hawking has survived motor neurone disease for half a century. And much more than survived. Suffering from such an illness, he has advanced revolutionary ideas and defined an era in physics. He has held the same university chair as Newton and shown others in his field how to communicate, so well that theoretical physics is now far more accessible to the public than, say, art history.

Have you guessed what the work of art is yet? In 1995, Jake and Dinos Chapman created Ubermensch, a lifelike 12ft-tall fibreglass image of Hawking in his wheelchair perched on top of a rocky pinnacle. It was clearly not a homage to Hawking’s intellect or courage. Its title – meaning “Overman” or “superman”, a term used in Nietzsche’s philosophical writings – is plainly intended sarcastically. The work seems to suggest that Hawking, the modern superman, is a prisoner of his sick body. It stresses his carnal weakness and mocks the idea that his mind has somehow conquered matter.

It is less a work of art than a sneer. The Chapmans went on to make more interesting art. But the clumsiness of this caricature betrays their limitations.

They got it bizarrely, horribly wrong. Hawking’s story really is an epic triumph of the human mind. His defiance of illness is profoundly moving, his ability to mentally explore the universe in spite of it an inspiration for our time and times to come. How many lives are so poetic?

I suppose it’s not even worth remembering the Chapmans’ daft image of him. It just came into my mind again this week, and reminded me of the case against contemporary British art.