Last Chance to see: The first major retrospective exhibition of the American artist George Condo. Since his emergence in New York’s East Village in the early 1980s with his ‘fake Old Master’ canvases, George Condo has created one of the most adventurous, imaginative, and provocative bodies of work in contemporary art. George Condo: Mental States is the first major survey of paintings and sculptures from the past twenty-eight years of the artist’s career. Organised by the Hayward Gallery, Southbank Centre and curated by Hayward Director, Ralph Rugoff, the exhibition premièred at New Museum, New York in January to critical acclaim, and was recently shown at Museum Boijmans Van Beuningen, Rotterdam. The Hayward Gallery presentation features some 80 works, and includes nine of Condo’s portraits of Her Majesty The Queen.

Ralph Rugoff, Director of the Hayward Gallery says:
“I am delighted to be presenting the first major exhibition of Condo’s work in the UK. Long considered an artist’s artist, Condo’s work has been a major influence on a younger generation of painters, who have felt the impact of the artist’s astonishing technical ability, stylistic versatility and inventive subject matter.”

Displayed in the upper galleries of the Hayward Gallery, George Condo: Mental States is organised thematically and stylistically in ‘chapters’ developed in close collaboration with the artist – Portraiture, Mania and Melancholia, and Abstract-Figuration 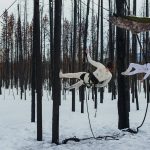 The Hayward Gallery will present Matthew Barney: Redoubt, an exhibition of the renowned artist and filmmaker’s latest body of work in 2021.