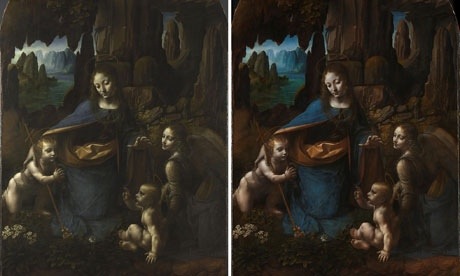 This article titled “Leonardo da Vinci amazes at the National Gallery – quietly and calmly” was written by Charlotte Higgins, for The Guardian on Friday 4th November 2011 20.14 UTC

The first image at the National Gallery’s Leonardo exhibition is an eye of a face in profile, fierce and Roman-nosed, sketched in ink. The brain is shown in section, cut away to reveal the optic nerve. An entirely fictitious anatomical vision, as it happens, but one that relates the eye to the interior – to the soul and the imagination. It could, perhaps, be read as an instruction to the visitor: look first but then feel and imagine.

Leonardo da Vinci: Painter at the Court of Milan will surely be one of the art sensations of the year when it opens to the public on Wednesday. But it will amaze quietly, and calmly (though the crowds may not be so calm, in the cramped Sainsbury wing exhibition suite). Here Leonardo is rescued from his popular role as the mad professor of the Renaissance. Here are no drawings of flying machines or schemes for hydraulics. What we get here is Leonardo: the painter.

And on a first look the show, in its own quiet way, is a knockout. There are things here you may never see again. Seven paintings – bearing in mind that there are only 15 finished paintings confidently attributable to Leonardo anywhere in the world – have been assembled from Poland, Milan, St Petersburg, Paris and the Vatican. The gallery has borrowed more than 50 drawings.

The exhibition leads up to one great climactic moment, when the National Gallery’s Madonna of the Rocks is shown face to face with an earlier version of the same painting from the Louvre. In the words of Nicholas Penny, the director of the gallery – and a man not given to breathless exaggeration – this is “a juxtaposition that was almost certainly not seen even in Leonardo’s own lifetime, nor at any time since, and one that is unlikely ever to be repeated”.

It doesn’t get any better for Leonardo scholars – especially as the London Madonna of the Rocks, traditionally regarded as the inferior of the two, with fewer passages confidently to be ascribed to the master, has recently been cleaned and studied afresh. The French version, yellowed and more damaged, at first glance looks the poor relation. But then, gradually, the subtlety and softness of the Paris version begins to emerge. An ambiguity to the gaze of the angel that sits on the right of the picture, pointing at John the Baptist, but apparently looking at something that might be behind your left shoulder …

It is that ambiguous gaze of Leonardo’s subjects that mesmerises in the early rooms of the exhibition. Here we are shown how Leonardo broke the mould of Milanese royal portraits by rendering sitters not in strict profile, but half-turned towards or away from the viewer. It sounds banal. But something extraordinary happens in these three great portraits – the Lady with the Ermine, the painting known as the Belle Ferronière, and the Portrait of the Musician. The musician’s gaze – it seems – is drawing us inward, tempting us towards an unknowable interiority. La Belle Ferronière seems almost angrily deep in contemplation, watching something behind you, out of your sight. She’s certainly not interested in you. These are almost alienating works. They are not friendly. But what power.

It is a shock to come to the final room of the exhibition, where Jesus stares face on. This is Christ as Salvator Mundi, a work recently conserved, studied and attributed to Leonardo – an event that the exhibition’s curator Luke Sysons, briefly emerging from scholarly understatement in his catalogue essay, calls “an extraordinary surprise”. Out of a plain black ground Christ emerges, or rather glimmers, something in the handling of the paint giving him a sort of fevered numinousness. Mad professor, no. But Leonardo as magician – yes.