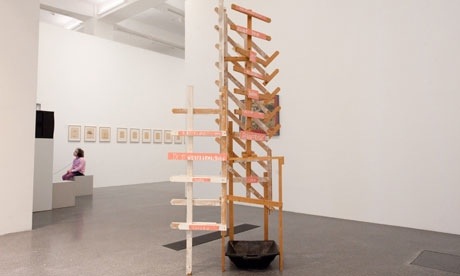 The artwork, entitled When It Starts Dripping From The Ceiling, consists of a trough under a wooden tower of slats. Photograph: Bernd Thissen/EPA

This article titled “Overzealous cleaner ruins £690,000 artwork that she thought was dirty” was written by Helen Pidd in Berlin, for The Guardian on Thursday 3rd November 2011 19.59 UTC

An overzealous cleaner in Germany has ruined a piece of modern art worth £690,000 after mistaking it for an eyesore that needed a good scrub.

The sculpture by the German artist Martin Kippenberger, widely regarded as one of the most talented artists of his generation until his death in 1997, had been on loan to the Ostwall Museum in Dortmund when it fell prey to the cleaner’s scouring pad.

The work, called When It Starts Dripping From the Ceiling (Wenn’s anfängt durch die Decke zu tropfen), comprised a rubber trough placed underneath a rickety wooden tower made from slats. Inside the trough, Kippenberger had spread a layer of paint representing dried rainwater. He thought it was art: the cleaner saw it as a challenge, and set about making the bucket look like new.

A spokeswoman for the museum told German media that the female cleaner “removed the patina from the four walls of the trough”.

“It is now impossible to return it to its original state,” she said, adding that it had been on loan to the museum from a private collector and was valued by insurers at €800,000 (£690,000).

She said that cleaning crews had been told to keep 20cm (8in) away from artworks, but it was unclear if the woman – who worked for a company to which cleaning had been outsourced – had received the memo.

If Kippenberger is now turning in his grave, he may find solace in the fact that he is not the only artist to have his works ruined by cleaners. In 1986, a “grease stain” by Joseph Beuys valued at about €400,000 was mopped away at the Academy of Fine Arts in Düsseldorf.

At least the artwork didn’t end up in a skip. In 2004, a cleaner at Tate Britain in London threw away part of a work by another German artist, Gustav Metzger, after mistaking it for rubbish. The cleaner failed to realise that a plastic bag containing discarded paper and cardboard was an integral part of Recreation of First Public Demonstration of Auto-Destructive Art, and not just some litter. The bag was later recovered, but it was too damaged to display, so Metzger replaced it with another bag.

Germans are not the only victims. In 2001, Damien Hirst lost a pile of beer bottles, ashtrays and coffee cups, meant to represent the life of an artist, when a caretaker at the Eyestorm Gallery in London cleared it away.