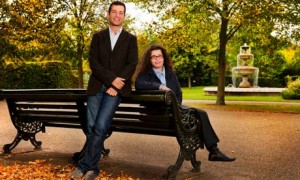 Twenty years ago, two recently graduated friends from university started a magazine which they produced from one rented workstation in a shared office near Old Street, London.

The magazine was the international art journal Frieze, and the two friends were Matthew Slotover and Amanda Sharp, working with artist Tom Gidley. It was founded on the eve of a huge, little-predicted expansion in the British and international contemporary art world, changes that the magazine charted with some prescience. “Damien Hirst was on the cover of our pilot issue,” says Sharp. “In that piece he mapped out his career for the next 20 years.”

In 2003, Slotover and Sharp set up Frieze art fair, gathering together blue-chip contemporary art galleries from across the world in Regent’s Park, London, to sell work to the expanding cohorts of international art collectors – some residents in Blair’s millionaire-friendly Britain, others visitors from Europe and the US. Quickly, with the fledging Tate Modern, it became the focus of the most important season in the British art world – “Frieze week” – in which the year’s most important art openings occur in dizzying succession.

Now comes the next chapter for Slotover and Sharp. They have announced a slew of new projects: a Berlin-based, bilingual German and English version of Frieze magazine, and two new fairs – a Frieze art fair for New York and a London fair, Masters, with contemporary art sold alongside historic work.

Speaking the week before this autumn’s Frieze fair opens, the pair are nostalgic about the early days. “We weren’t doing the magazine for audiences, but we wanted to do something that answered our own questions about the art world,” says Slotover. Sharp adds: “We didn’t think of it as a business. It gave us an extraordinary life of the mind. It was a privilege to watch the art world grow.”

Frieze grew up with the art world, too: like many of the artists who were young in the 1990s, it has grown from the improvisatory, homemade early days into an international business.

“The art world has been subject to a massive sea change and of course it’s for the good,” says Sharp, ” I’ve been lucky enough to have an extraordinary professional life and a very rich cultural life as a result, and I’m very glad that more and more people have had the opportunity to enjoy contemporary art.”

The Masters fair, which will run next October alongside Frieze, with about 70 galleries, is a fascinating development. Fashion has decided firmly in favour of contemporary art over the past decade, with the antiques market in concomitant decline. Sharp and Slotover, though, are detecting a swing back towards a taste for historic paintings and antiques. “The world has flipped,” says Slotover. “Twenty years ago things had to be old to be valued. That changed with the excitement over contemporary art, but it went too far. What we’re suggesting is that just because something’s old, it doesn’t mean it’s not super-radical. It’s a cliche, but all art was contemporary once.”

Sharp adds – they often finish each other’s sentences, like softly spoken, harmonious siblings : “We want people not to see these things as objects covered in cobwebs.”

This new taste for the old, they say, is something they can feel in the air. “When we asked artists what work they would most like to live with, for our 20th anniversary issue, Breugel was the most popular,” says Sharp, referring to the renaissance Flemish painter. “Artists seem to be sitting around arguing about the varnish on 17th-century paintings.” It is, she adds, “good for contemporary art to be placed in this kind of lineage”.

Slotover also points out two exhibitions opening this weekend. One is the “fantastic” British Museum exhibition curated by Grayson Perry, in which his own work is placed alongside ethnographic and antique objects from the museum’s collection. The other is at the Frans Hals Museum in the Netherlands, for which American painter John Currin has created new works to be hung alongside paintings by the 17th-century Dutch painter Cornelis van Haarlem.

When the world is deep in recession and economic uncertainty, it seems a curious time to be envisioning such rapid expansion. But Sharp and Slotover are confident, pointing out that all their previous developments came in economically gloomy times: the magazine in recession-hit 1991, the first fair in the aftermath of the dotcom crash.

The art market, they argue, has not been as badly hit as other industries, with Frieze holding fairly steady in size (this year it has 173 stands, the same number as last year).

“My latest pet theory,” said Slotover, “is that people don’t buy art on borrowed money.” At the moment, says Slotover, “the art market doesn’t feel frothy” – meaning overblown, or in a bubble. “We had extraordinarily strong applications for the New York fair,” adds Sharp. “It’s going to be as big and as strong and as good-quality a fair as London Frieze.”

• Gerhard Richter, Tate Modern: a career retrospective for the German painter (until 8 January).

• Richard Tuttle at Stuart Shave/Modern Art: an exhibition of new work by the American sculptor, from 12 October.

• Marlene Dumas: new work from the Dutch painter, at the Frith Street Gallery. From 14 October.

• Grayson Perry at the British Museum: the potter selects artefacts from the museum’s stores, alongside his own work.