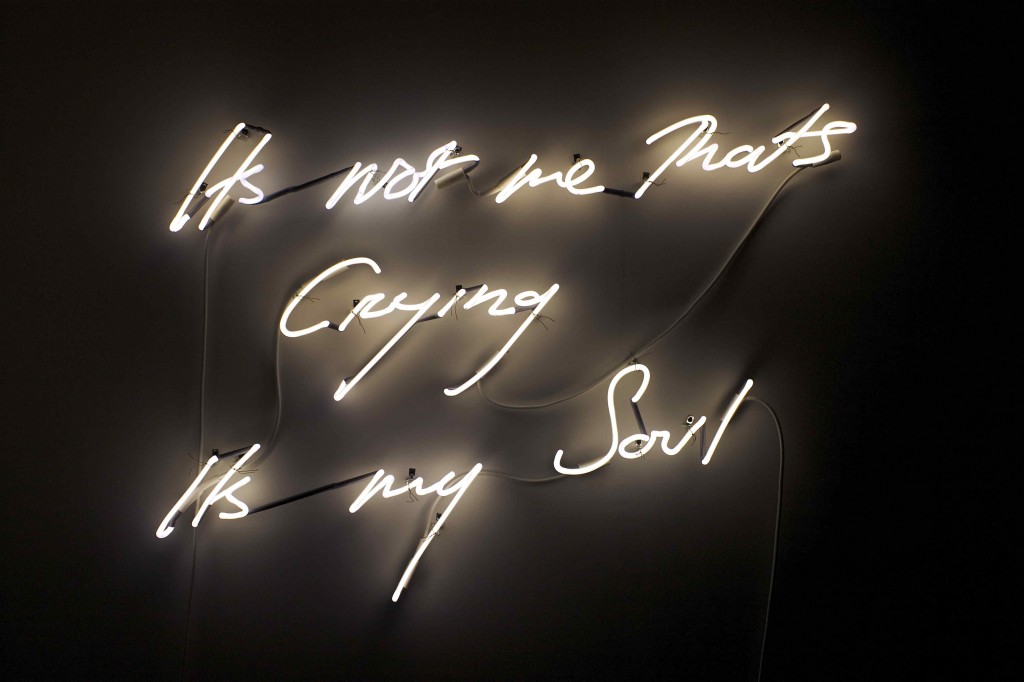 Image:Tracey Emin Its not me Thats Crying Its my Soul neon
Over $1m of art from 30 artists including Damien Hirst and Tracey Emin on show Simon de Pury to host live auction

The Boxer Rebellion confirmed for exclusive live performance
The MTV Staying Alive Foundation today announced the final details of its RE:DEFINE benefit art exhibition and auction to mark the 30th anniversary of the discovery of the AIDS virus, including the full list of contributing artists.

Image:Russell Young
Event curators The Future Tense have assembled an eclectic roster of 30 original works valued at over $1m from some of the world’s most exciting, dynamic and sometimes controversial artists, including painting, photography, sculpture and a large-scale public installation in downtown Dallas by streetartist Ben Eine. The 30 contributing artists are as follows:

Image:Stuart Semple
Collectors unable to attend the event in person will have a wide range of absentee bidding options, including the ability to both view and bid in real- time, simultaneous with the live event via the following link:
www.liveauctioneers.com/

Full absentee bidding information can be found at:
www.mtvredefine.com/

The catalogue for the event can be found at:
www.mtvredefine.com/catalogue

Image: Billy Chilish
Hosted at the Goss-Michael Foundation in Dallas, MTV RE:DEFINE will be
open to the public from September 16th – 23rd with a live auction of all 30 works taking place at an exclusive reception on September 24, hosted by Simon de Pury, Chairman of Phillips de Pury & Company. 100% of the proceeds from the auction will benefit the MTV Staying Alive Foundation, which encourages, energizes and empowers young people who are involved in HIV and AIDS awareness, education and prevention campaigns.

The MTV Staying Alive Foundation is a global grant-giving and content-producing public charity operating in affiliation with MTV Networks International.

In 1998, MTV launched the Staying Alive TV series, which grew to be the world’s largest multimedia HIV prevention and awareness campaign for young people, including documentaries, dramas, public service announcements, websites, events and forums.
In 2004, the MTV Staying Alive Foundation was created, expanding the initiative in to a charitable, grant-giving organization to support youth-led initiatives committed to stopping the spread of HIV in local communities.

ABOUT THE FUTURE TENSE

The Future Tense acts as a springboard for a dynamic roster of emerging contemporary artists, working closely with them to support all aspects of their career progression.

Free from the constraints of a fixed gallery space, The Future Tense creates unique event concepts and genre-defining projects, curating bespoke spaces and working with affiliate galleries to service a broad
spectrum of private and institutional collectors.

Highly socially aware and with strong philanthropic sensibilities, The Future Tense works closely with a number of charitable causes including the MTV Staying Alive Foundation and children’s charity, War
Child.

ABOUT THE GOSS-MICHAEL FOUNDATION

The Goss-Michael Foundation was founded by George Michael and Kenny Goss in June 2007.

The Foundation offers the public a rotating schedule of exhibitions derived from Goss and Michael’s private collection of British contemporary art as well as other institutions.