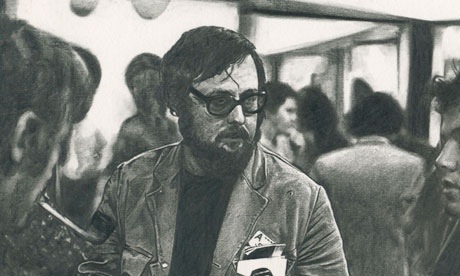 Image:Harald Szeeman (2011) by Sophia Crilly is shortlisted for the Jerwood drawing prize 2011

This article titled “Rothko, Hockney and Piero della Francesca – the week in art” was written by Jonathan Jones, for theguardian.com on Friday 9th September 2011 08.00 UTC

Jerwood drawing prize 2011
Is drawing still a vibrant and vital component of contemporary art? Find out at this award for exponents of a technique that shaped western culture and science for centuries.
• At Jerwood Space, London SE1, 14 September until 30 October

Do Not Remove
The brilliant Bruce Conner is among the triumvirate of subversive postwar American artists – the others are George Herms and Robert Mallary – celebrated in this exhibition for their poetic use of trash, ephemera, and junk.
• At Mayor Gallery, London W1, 14 September until 26 October

Victoria Morton
This engaging painter splashes about echoes of Kandinsky and, here, Picasso in colourful, expressive works poised between abstraction and landscape. Morton’s work always seems to be developing, and her latest is sure to be well worth a look.
• At The Modern Institute, Glasgow, 10 September until 22 October

Dublin Contemporary 2011
Thomas Hirschhorn, the most savagely political artist of our times, and Scottish psychedelic dreamer Jim Lambie are among the impressive array of participants in this big new event that brings a biennial-style atmosphere to Dublin.
• At various venues, Dublin, until 31 October

Up close: artworks in detail

Piero della Francesca, The Baptism of Christ, 1450s
An uncannily perfect composition, at once weightless and immensely solid, together with such details as its enigmatic gathering of angelic witnesses, parched white ground and ethereal blue sky make this one of the most beautiful and serious paintings in the world.
• At National Gallery, London WC2

Fortune fresco
In the middle ages the goddess of Fortune, whose origins are in pagan antiquity, found a place in the Christian cosmos. She appears in Dante’s Divine Comedy and in Siena cathedral, turning her wheel that raises some and casts others down. In this rare surviving English portrayal, the downward side of the wheel has been lost, and the bright gothic image that remains shows only the kindness of fortune to those who rise – which is heartening.
• At Rochester Cathedral, Rochester

Rembrandt, Kenwood Self-Portrait, c1663
In one of Rembrandt’s mightiest works, the painter stands palette in hand, looking at us in a profoundly challenging and unnerving way. He knows more about life than we do. On the wall behind him is a map of the world whose details we cannot read: the true map that Rembrandt paints is spiritual, emotional, written on the dark side of the eye.
• At Kenwood House, London N6

Claude Monet, Water-Lilies, after 1916
You can lose yourself for hours in the misted waters, golden reflections and illusory depths of Monet’s meditation on memory, time and the warped fabric of reality. Then elsewhere in Tate Modern you can see how Rothko and other great abstract artists share his radical sense of what a painting can be.
• At Tate Modern, London SE1

What the inspiring interiors of Britain’s best buildings look like

How Hockney’s giving Hollywood a run for its money

How a photographer set the world’s philosophers in stone

@dlaebe best recent shows : artangel’s gander and phyllida barlow at h+w. with gander everything you see becomes a clue, important

@dlaebe and phyllida: for the 1st time in my life the overcrowding at the opening seemed fitting, adding to the excitement of show

Have you been to any of these shows? What have you enjoyed this week? Give your review in the comments below or tweet us your verdict using #artweekly and we’ll publish the best ones.