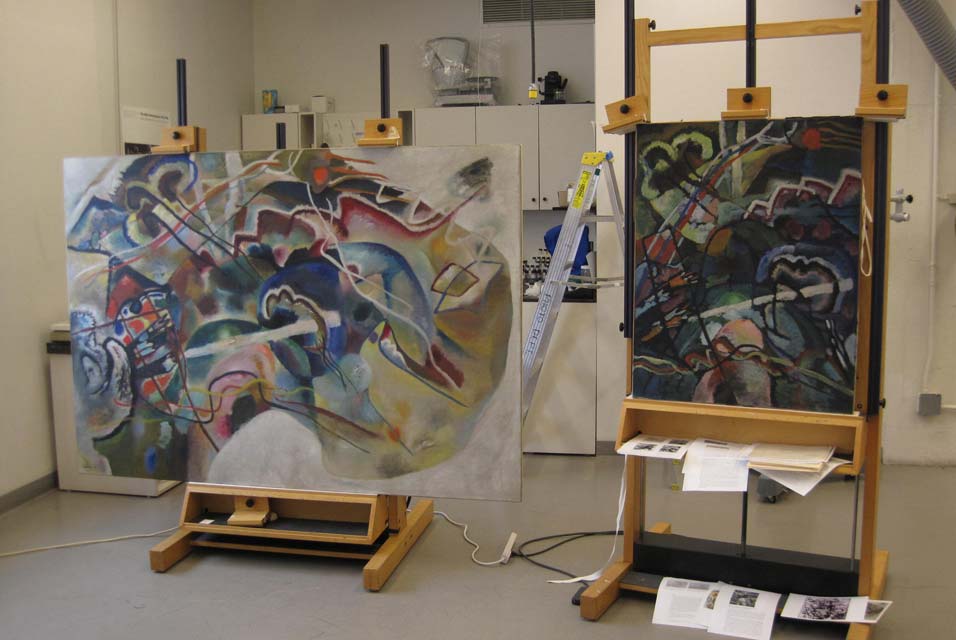 October 21, 2011–January 15, 2012
Completed nearly 100 years ago, the canvas Painting with White Border (Bild mit weissem Rand, May 1913) by Vasily Kandinsky (1866–1944) was inspired by a trip the artist took to Moscow in fall 1912. Upon his return to Munich, where he had been living intermittently since 1896, Kandinsky searched for a way to visually record the “extremely powerful impressions” of his native Russia that lingered in his memory. Over a period of five months, he explored various motifs and compositions in study after study, moving freely between pencil, pen and ink, watercolor, and oil. After he produced at least sixteen studies, Kandinsky finally arrived at the pictorial solution to the painting: the white border.

This focused exhibition, co-organized with the Phillips Collection, Washington, D.C., will reunite for the first time the Guggenheim’s final version of the painting from May 1913 with twelve related drawings and watercolors and one major oil sketch and will feature the results of an extensive conservation study of the Guggenheim and Phillips paintings. This study revealed a previously unknown painting beneath the surface of the Phillips’s Sketch I for Painting with White Border (Moscow) (Entwurf I zu Bild mit weissem Rand [Moskau], 1913). A rare glimpse into Kandinsky’s creative process, this presentation reveals the gradual and deliberate way the artist sought to translate his ideas into a bold new language of abstraction.

This exhibition is supported by a grant from the Joseph and Sylvia Slifka Foundation. The conservation study, research, and treatment of Painting with White Border have been made possible through the generous support of Friends of Heritage Preservation.

This focused exhibition traces Kandinsky’s working method through a roughly chronological display of twelve drawings and watercolors and one major oil sketch related to Painting with White Border. According to a May 1913 essay Kandinsky wrote about the picture, later published in an album titledKandinsky 1901–1913 (1913), the artist executed the first oil sketch (owned by the Phillips) “immediately upon my return from Moscow in December 1912.” The orientation of his preliminary studies evolved from a vertical to a horizontal format, and he used pencil, pen and ink, and watercolor throughout the many iterations. Kandinsky explored key motifs reminiscent of his native Russia, including the troika (a three-horse sled) and Saint George. Ultimately the artist executed more studies than he had for any of his previous paintings before resolving the composition with a soft, undulating white border that he compared to a white wave. In his seminal 1911 treatise Über das Geistige in der Kunst. Insbesondere in der Malerei (On the Spiritual in Art: And Painting in Particular), Kandinsky wrote that the color white expresses a “harmony of silence. . .pregnant with possibilities.”

In preparation for this presentation, a team of conservators from the Guggenheim and the Phillips, led by Gillian McMillan, Associate Chief Conservator for the Collection, Guggenheim Museum, and Elizabeth Steele, Head of Conservation, the Phillips Collection, worked with scientists Narayan Khandekar and Erin Mysak from the Straus Center for Conservation, Harvard Art Museum. The group undertook new technical research on the painting and its related oil study, offering further insight into Kandinsky’s creative process. The conservators examined Painting with White Border (owned by the Guggenheim) and its study Sketch I for Painting with White Border (Moscow) (owned by the Phillips) side-by-side for the first time. With techniques including infrared imaging, X-radiography, and crosssectional and chemical analysis of the paints Kandinsky used, conservators scrutinized both paintings, comparing the brushwork, mediums, and development of the compositions.

The conservation study supports interpretations of Kandinsky’s working method. For example, the direct application of the brush to canvas of Sketch I implies a more spontaneous technique as compared to the more methodical treatment of the final work, Painting with White Border, in which Kandinsky used a graphite pencil to lay out compositional elements before painting. Studies of microscopic samples of paint from both works show that Kandinsky created his own palette out of combinations of as many as ten different pigments per hue.

The conservation team also discovered a previously unknown painting beneath the surface of Sketch I for Painting with White Border (Moscow). The underpainting, a representational landscape with figures, has been attributed to the German artist Gabriele Münter, Kandinsky’s companion from 1903 to 1916, based on its similarity to Münter’s gouache, Garden Concert (Gartenkonzert, ca. 1912), on view in this exhibition, and a canvas on the same subject in a private collection. While there are few known instances of Kandinsky painting over an existing canvas and no other known instance of him painting over a work by Münter, limited study has been done of Kandinsky’s canvases to date. Future research and conservation analysis may better clarify the attribution of the underpainting.

Besides the focused presentation surrounding Painting with White Border, three Kandinsky canvases from 1913, all from the Guggenheim’s collection, will be on view in a neighboring gallery. Black Lines (Schwarze Linien) and Light Picture (Helles Bild), included in this selection of paintings, were both executed in December 1913 and were among the first works the artist considered to be truly nonrepresentational. Along with Painting with White Border, these paintings were also some of the first Kandinsky works to enter Solomon R. Guggenheim’s collection.

In addition to the artwork on view, interactive touch-screen displays will allow visitors in-depth exploration of the conservation findings, institutional history, and related topics in Kandinsky’s oeuvre. An illustrated chronology in the gallery will trace the artist’s life in Munich from 1896 through 1914. In an adjacent room, Essay: Painting with White Border, a segment of the film Kandinsky: A Close Look by Grahame Weinbren and commissioned by the Sackler Center for Arts Education, will be screened continuously. This close cinematic examination of Painting with White Border is interlaced with voiceovers of the artist’s own words from his 1913 essay on the painting. It explores how an artistic interpretation can provide viewers with a visual experience that helps to develop their own observational and critical apparatuses to become more informed and engaged viewers.

Kandinsky’s work is a cornerstone of the Solomon R. Guggenheim Museum’s collection. The museum’s founder, industrialist Solomon R. Guggenheim, began acquiring Kandinsky’s paintings, including Painting with White Border, as early as 1929. Today, the Guggenheim’s holdings of his work are among the most extensive in the world. In 2009, as part of its 50th anniversary celebration, the museum mounted the major retrospective Kandinsky. The opening date of Kandinsky’s Painting with White Border at the Guggenheim Museum coincides with the 52nd anniversary of the Frank Lloyd Wright– designed building, which opened its doors to the public on October 21, 1959.

Catalogue
The exhibition is accompanied by a 136-page catalogue edited by Elsa Smithgall and published by the Phillips Collection in association with Yale University Press. The volume includes essays by Smithgall; Annegret Hoberg, Curator, Städtische Galerie im Lenbachhaus of Munich; and Gillian McMillan and Elizabeth Steele, together with Narayan Khandekar and Erin Mysak, scientists from the Straus Center for Conservation and Technical Studies at the Harvard Art Museums, on the recent conservation analysis of the painting and its related oil sketch. Priced at $45 in a hardcover edition, the exhibition catalogue can be purchased at the Guggenheim Store or online at guggenheimstore.org beginning in mid-October.