Bringing together 30 of the world’s most innovative and exciting artists, the Beck’s Green Box Project shows what can be done with the right kind of support. Now, Beck’s are launching an Art Fund to take that support even further. Featuring industry mentoring, financial support and massive global exposure, here’s your chance to join the Green Box Project alongside the world’s favourite artists:

The sign up process is simple, just head to Becks.com with your idea at the ready, fill in the form and off you go. It’s the judging process that requires you to bring your best, most baller and considered concepts to the table. All ideas go straight to the Green Box Project board formed by world-renowned photographer Nick Knight and influential LA producer and DJ Sam Spiegel. It’s got to be good – all selected projects are granted the requested funding, your work will be displayed permanently online in the Green Box Project’s virtual gallery and possibly in physical Green Boxes in London, Manchester, Los Angeles, New York, Miami, Rome or Milan… all using your original vision completely unfiltered and unedited.

A little inspiration for you to get you going? Why not. Fashion photographer and NYC native Shaniqwa Jarvis has just launched her Green Box “The Conversation” at Santa Monica Pier. In the exclusive interview here, Shaniqwa tells us how she’s come to create the piece, the journey she’s taken to get this far and what it means to be given an opportunity to do what you love.

One of the most recognised and respected American industrial designers of his generation, Stephen Burks and his New York studio, Readymade Projects have also launched their Green Box. Sitting steady at Coco Walk in Miami, the iconic designer has created an organic yet surreal totem of his sketches and dancing objects, the elements coming together and filling your screen to form a complete vision of design optimism and inspiration. Click here to watch Stephen Burks’ exclusive interview where he takes us through his latest curatorial exhibition and explains how designers serve as “cultural connectors.”

Go to Becks.com to see Green Boxes by Kenneth Cappello, Sage Vaughn, Reed + Rader, Kate MccGwire and Austra. Be sure to check out their virtual galleries and exclusive interview films as well. 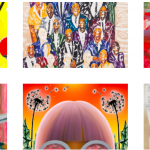 Public Art Fund has launched Art on the Grid a multi-platform exhibition of new work by a group of 50 New York-based, emerging artists. 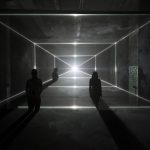 A major immersive exhibition by London-based practice United Visual Artists (UVA) will be presented by The Store X The Vinyl Factory at 180 The Strand, opening 2 October 2019, in collaboration with the Fondation Cartier pour l’art contemporain, Paris.