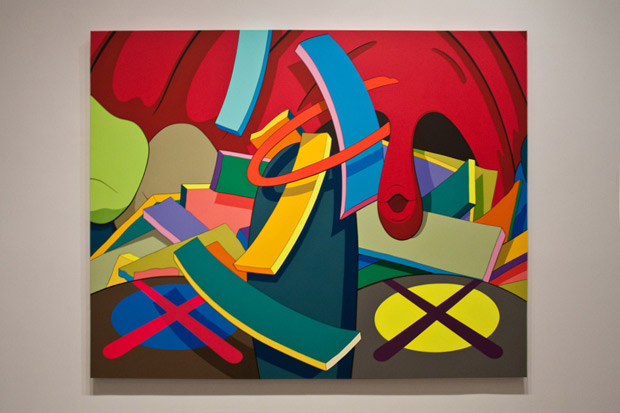 Erik Parker and KAWS. This is the first time that the two artists have collaborated to organize an exhibition. Pretty on the Inside includes works in a range of media by seven American artists: Todd James, KAWS, Tony Matelli, Erik Parker, Joyce Pensato, Peter Saul, and Karl Wirsum. At first glance, these artworks challenge the viewer through their visual intensity, but upon closer inspection, they reveal an inner beauty. Many of the artists included make ironic or subversive works, hijacking the language of cartoons and comics to both celebrate and criticize contemporary culture.

Todd James (b. 1969) makes large-scale installations, drawings, animated videos, and gouache paintings that appropriate the style of Saturday morning cartoons to make social and political commentary. KAWS (b. 1974) draws from the traditions of Pop art and Geometric Abstraction, while revitalizing the figure by altering and recombining animated forms and features to create new hybrid images.

Tony Matelli (b. 1971), known for his elaborately rendered sculptures, contributes Double Meat Head (2008)— a compelling self-caricature rendered from various cuts of meat. In its various stages of decomposition, the sculpture is a rumination on death, decay, and rebirth. Erik Parker’s (b. 1968) figurative paintings feature eye-popping colors and psychedelic designs, yet take their inspiration from Francis Bacon, Vincent Van Gogh, and Pablo Picasso. The exhibition will represent the New York premier of Parker’s new high-octane take on the still life genre. Joyce Pensato’s (b. 1941) expressionistic black and white canvases and charcoal drawings of bug-eyed iconic characters are the anti-Disney, where her sources are transformed into psychologically charged compositions through barrages of action painting.