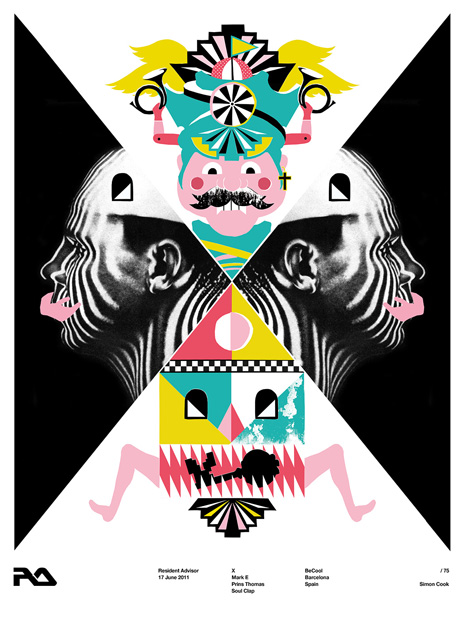 www.residentadvisor.net/x/
Established in 2001, RA is at the very forefront of the electronic music scene. Read by over 1 million unique readers each month, RA celebrates their 10th anniversary with a series of ten parties in ten cities, with each party boasting a secret ‘X’ headliner:

“We wanted to do something special to mark the anniversary, to bring together artists who’ve helped shape the electronic music scene as we know it and surprise our readers. So the idea of a series of events with a secret headliner was born: we select ten artists influential in electronic music over the last decade to curate line-ups that include emerging talents that will influence the next ten years. We do it in ten cities, in ten different countries with thriving RA communities. And we’ve asked ten visual-artists to create a unique poster for each event. We’re really excited to see how it all comes together.”
(Nick Sabine, Founder of Resident Advisor)

The line-ups for the events are characteristically challenging and forward-thinking- take, for instance, the series launch party at Cable in London: featuring a supporting cast of Lawrence, Onur Özer, Kyle Hall, Trevor Jackson, Ben UFO and the techno artist known as 19.454.18.5.25.5.18, curated by the much-anticipated X. London –

The second party will take place during Sonar at BeCool in Barcelona, with Soul Clap, Mark E, Prins Thomas and the X. Barcelona –

The rest of the lineups will be announced soon, but for now we can reveal the other parties will be happening at D-Edge in Sao Paulo, Arma 17 in Moscow, Civic in Sydney, Brancaleone in Rome, Eleven in Tokyo, Berghain / Panorama Bar in Berlin and Trouw in Amsterdam.

Resident Advisor has always recognised and celebrated the relationship between electronic music and visual art, and so it has commissioned ten different designers to create limited edition hand silk-screened posters for each event, which will be sold in limited runs of 75 on RA. Participating artists include Trevor Jackson, The Designers Republic, Stefan Marx, Mike Cina, and Laurent Fetis.

Resident Advisor (RA) is the world’s leading electronic music and club culture magazine. Established in 2001, RA publishes news, reviews and features to an audience of more than a million monthly readers. Thousands of artist and label profiles—and even more user- generated event and club listings—have made RA an invaluable resource to both the clued- up music lover and the clubgoer simply looking for a good night out. With offices in London and Berlin and contributors spanning the globe, RA covers anything and everything that is electronic music-related.