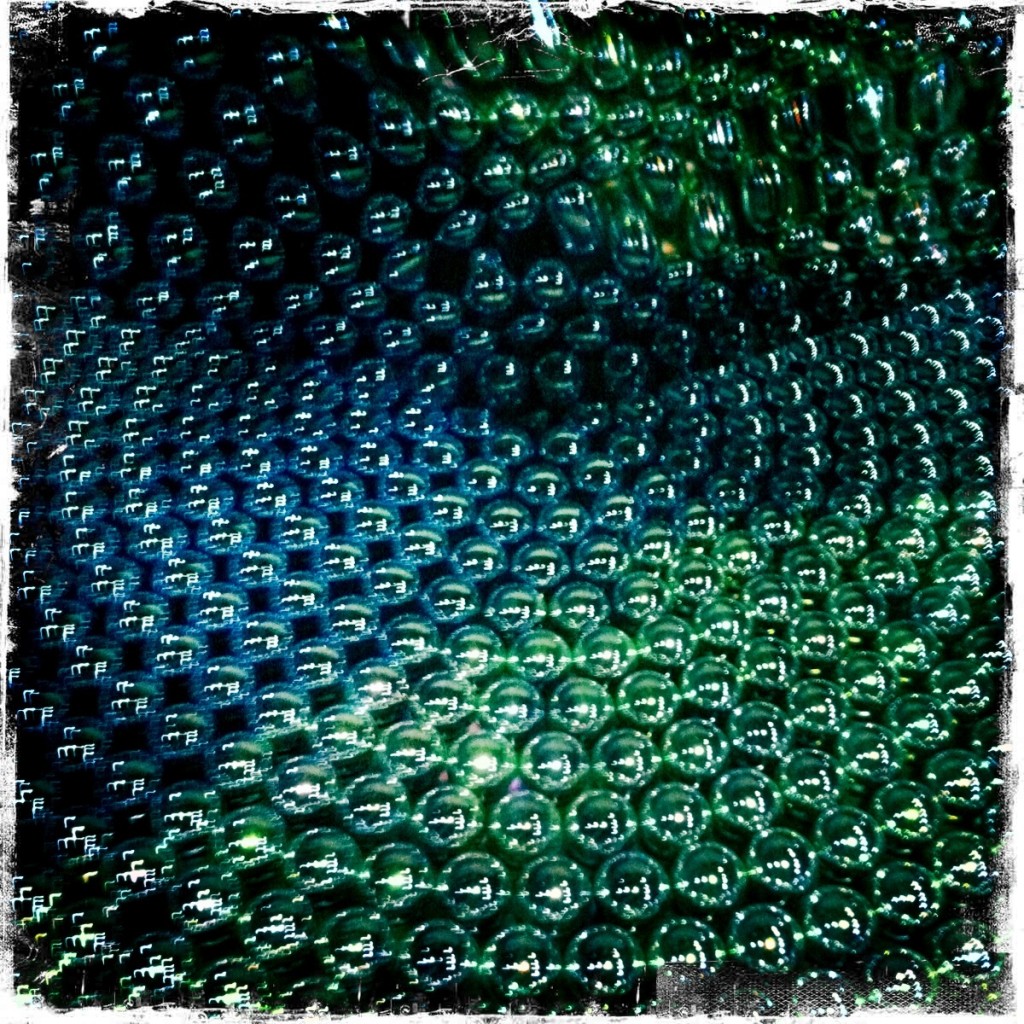 After 5 days in Venice for the opening of the 54th la Biennale di Venezia, it took a little time to catch my breath and digest the overwhelming amount of incredible art on display combined with the decadence of the parties, against a surreal backdrop of the heavenly floating city known as Serenissima.

Baratta described the Biennale as “a great pilgrimage, where in the
works of artists and in the work of curators the voices of the world meet”. Newcomers to Venice include Andorra, Saudi Arabia, Bangladesh and Haiti. While the Republic of Azerbaijan host their Pavilion at Palazzo Benzon on the Canale Grande.

Aside from the hub of the Biennale that is the Giardini and Arsenale, the city is host to a cornucopia of satellite exhibitions, installations and events. Uber-Curator and Director of the 2003 Venice Biennale Francesco Bonami presented an interesting exhibition of Russian contemporary art with Irene Calderoni. Titled ‘Modernikon’, the exhibition introduced me to the sculpture of Stanislav Shuripa, based on housing units of the Soviet Union in the 60’s, and utilising geometric abstraction to demonstrate the failure of architectural rationalism, and installed cleverly to lead the eye to the courtyard of the Casa de Tre Oci, designed by artist Mario de Maria in 1913. David Ter-Oganyan’s monochrome paintings represent countries such as Mali and Algeria, and are a conceptual interpretation of the colonization of Africa. 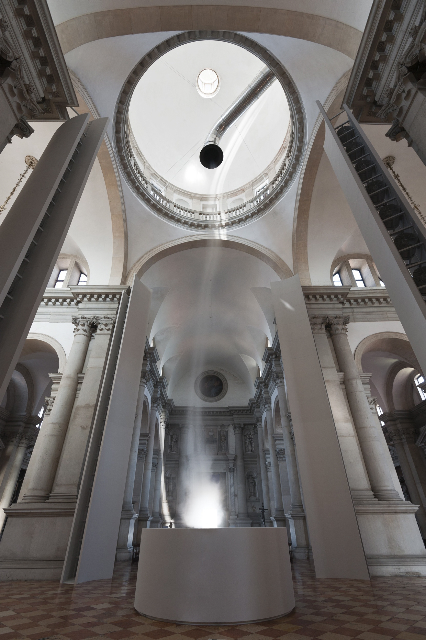 Image: Anish Kapoor ‘Ascension’ Photo: Oak Taylor-Smith
A Vaporetto strike on Tuesday evening didn’t deter the throng of Anish Kapoor fans including Richard Rogers, who flocked to marvel at ‘Ascension’, his new installation at the Basilica di San Giorgio. This is the first time an artist has staged an intervention in the 16th Century Palladian church, and Kapoor has created a wonderful paradox with a column of white smoke emerging from a circular vessel placed between the nave and transept of the Basilica. Since the Vaporetto drivers had decided to stage their own intervention by downing tools on the first day of the Biennale, it was every man for himself as people left the Isola di San Giorgio and fought their way onto a lone Vaporetto. 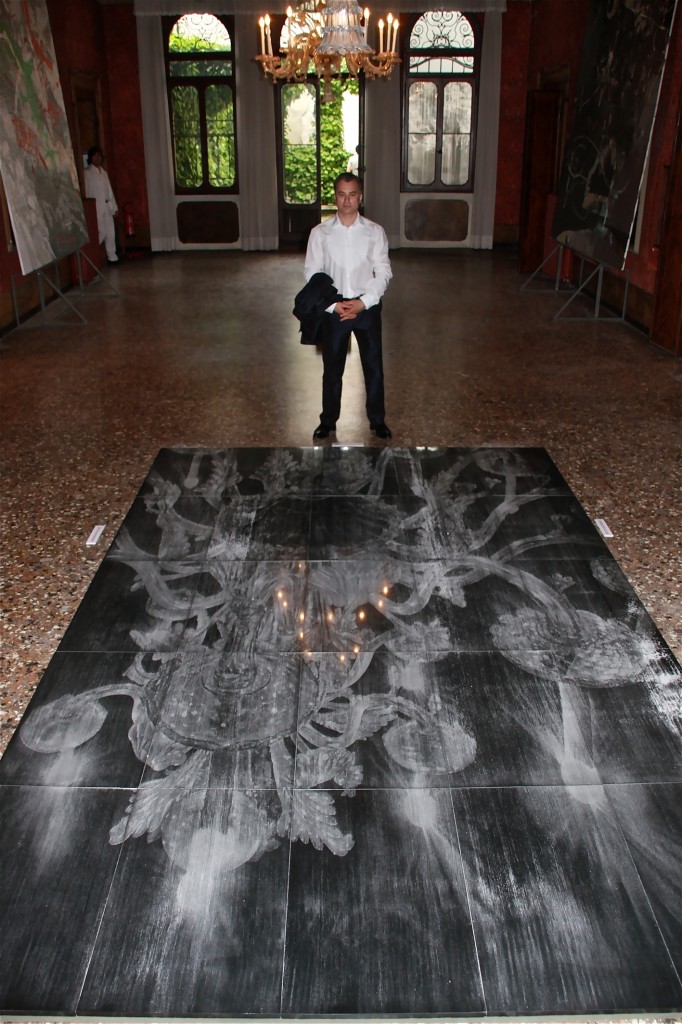 I was Press Officer of the Azerbaijan Pavilion, who held their press preview and private view at the 17th Century Palazzo Benzon, of ‘Relational, of Bakû’, featuring six artists and including sculpture, painting, performance and video art.
Mikayil Abdurahmanov exhibited seven monumental new paintings in the classical tradition, whilst honorary member of the Russian Academy of Art Altai Sadighzadeh displayed paintings and sculptures created for the Azerbaijan Pavilion. 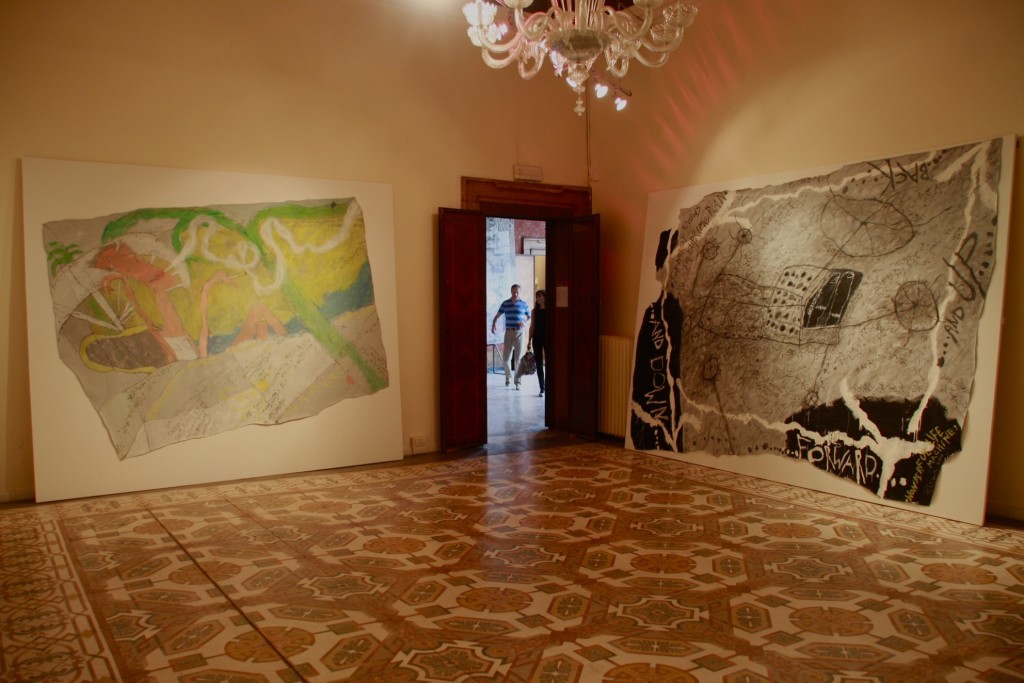 Moscow-based artist Aidan Salakhova exhibited three reliefs of veiled figures holding symbolic relics, opposite a wall of teardrops, as well as a series of miniature based paintings, and an intervention on the ceiling of one of the rooms of the Palazzo. Khanlar Gasimov has created a site-specific floor sculpture inspired by the chandelier in Palazzo Benzon and carved by hand from granite, and a room containing self-dissolving sculptures made of candy, alongside untreated canvas, which Gasimov gave to poets in Azerbaijan to recite poetry to for 88 hours. A group of art students wore the poetry-infused canvases in a performance at the
private view. 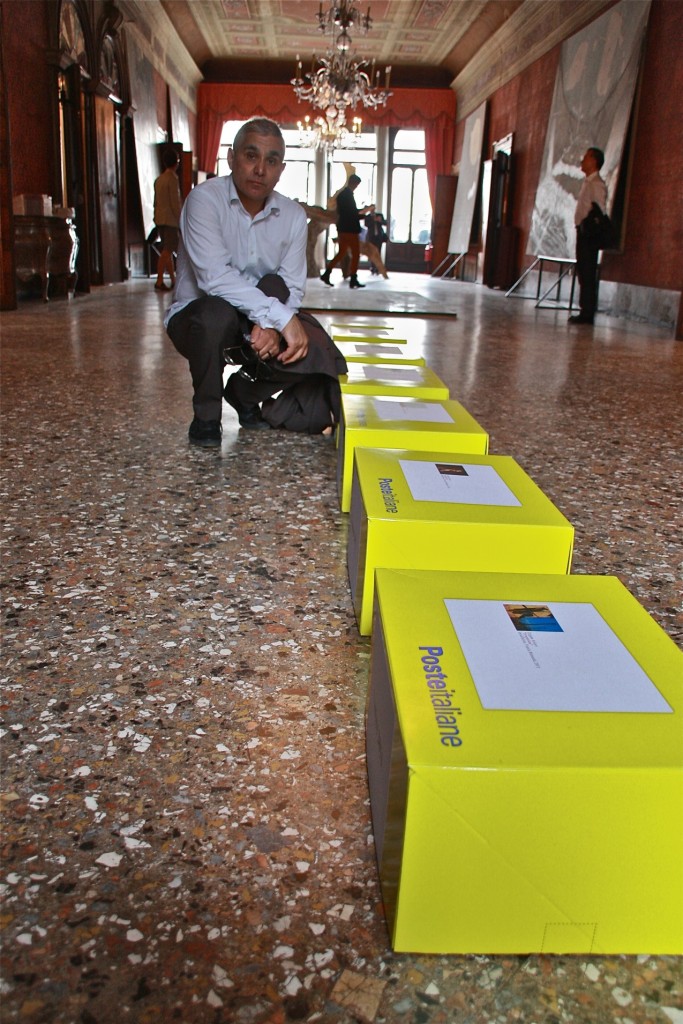 Image: Zeigam Azizov with his installation photo: Sky Sharrock
London-based Zeigam Azizov’s multi-media installation “Symposium” consists of a dark room containing a film of children playing in Baku’s derelict oil fields, with a text by the artist that attempts to decipher stereotype narratives in “the society of spectacle”. In the middle room Azizov displays documents and photographs of the process of his work in seven boxes. Aga Ousseinov’s installation “In the middle of Erewhon II” is an invention comprised of ingenious machines, video and exquisite drawings. Ousseinov’s work is a reaction to the current state of helplessness and exhaustion the world is experiencing, and features a seagoing machine based on the early Soviet “agit-trains”. 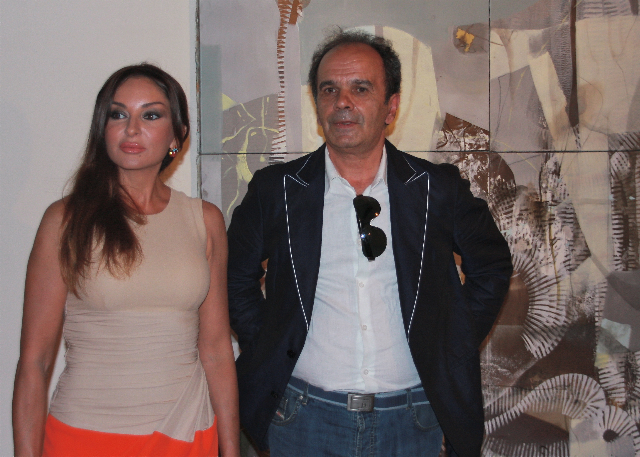 Image: The First Lady of Azerbaijan with artist MIKAYIL BDURAHMANOV

The First Lady of Azerbaijan, Mehriban Aliyeva, attended the opening ceremony, as
did Abulfas Garayev the Minister of Culture and Tourism, Julia Peyton-Jones and Hans Ulrich Obrist of the Serpentine Gallery, and Simon de Pury. The exhibition was curatedby curator and comissar of the Pavilion Cinghiz Farzaliev, and curator Beral Madra of BM Contemporary Art Center in Istanbul, with the contributions of co-commissioner Vittorio Urbani (Nuova Icona, Venice). I showed a group of curators around the exhibition on Saturday, including Rachael Barratt who is working on the Moscow Biennale, and Pablo Ganguli of Liberatum. 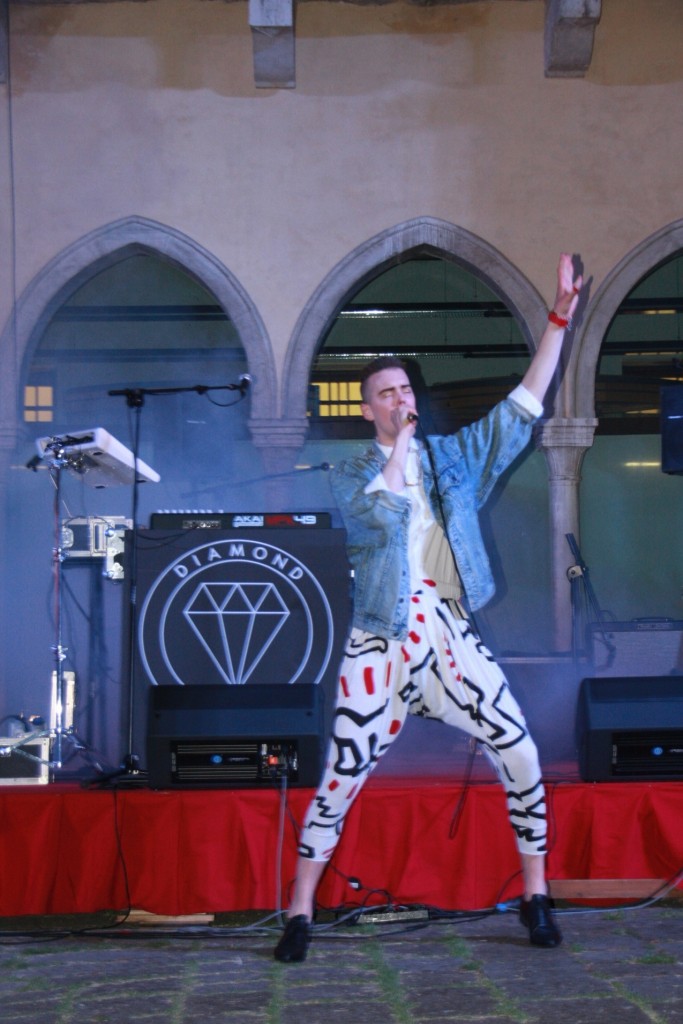 Image: Canadian Party Photo by Lee Sharrock
To the Canadian party and an 80’s inspired performance by a singer wearing MC-
Hammer style trousers, enthusiastically playing air guitar and an old-school Yamaha keyboard, rather out of place in the courtyard of a beautiful Venetian Palazzo, but definitely great entertainment whether it was meant to be ironic or not. At the Giardini the next day, I was impressed by Steven Shearer’s haunting paintings of Rockers in the Canadian Pavilion. His drawings are reminiscent of fauvist woodcuts, and the haunting expressions of the long-haired hippy’s populating his canvases evoke Klimt, with a psychadelic palette lending a retro feel. 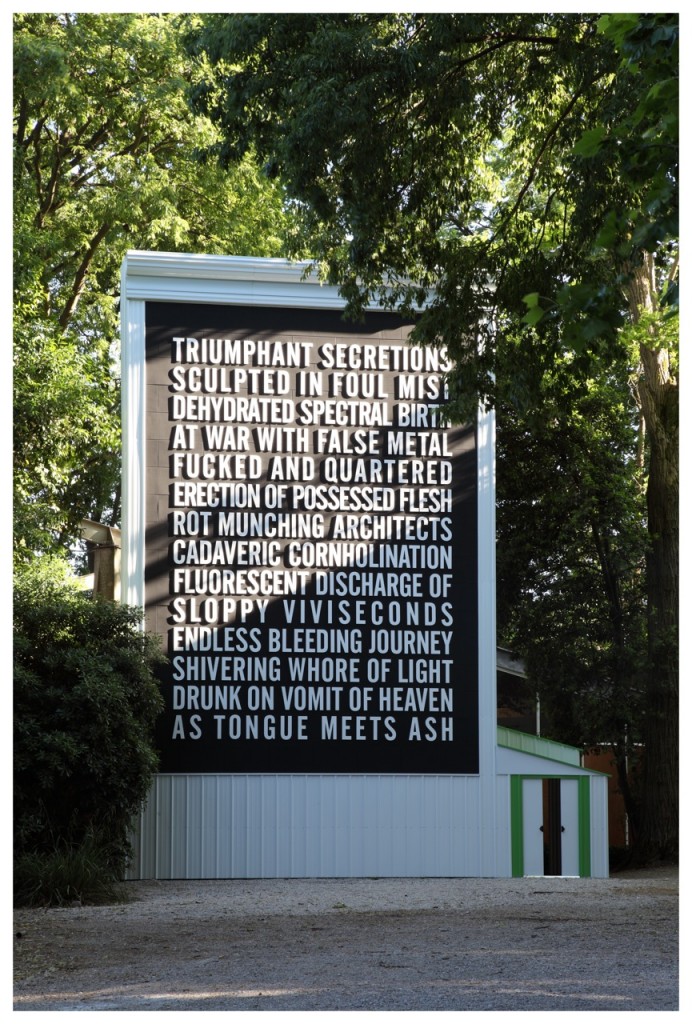 The Giardini contained a generous helping of politically charged artwork, with a sprinkle of pure sensory experience, and a few random performance artists thrown in at the entrance of the park for light relief. As we approached the entrance we noticed three women dressed as chambermaids, wearing marigolds and painstakingly cleaning the leaves of the bushes. 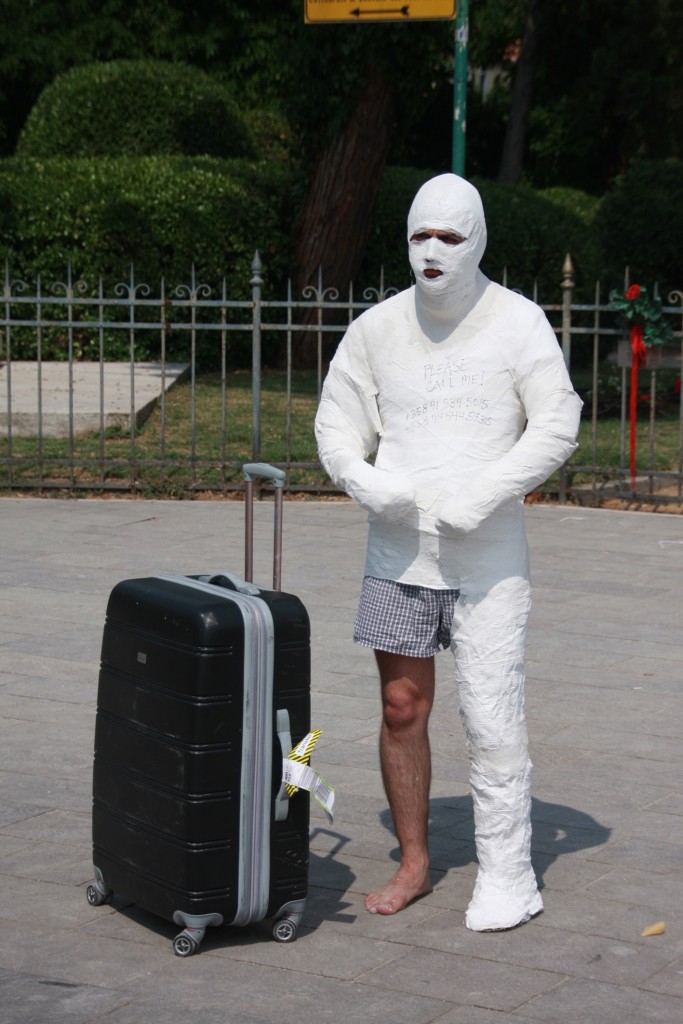 Image:Plaster cast photo by Sky Sharrock
A few seconds later we came across a man covered in plaster, with instructions written in Italian on his plastered chest to ‘call me’ with a phone number, which if dialed would result in a phone ringing inside the plaster. 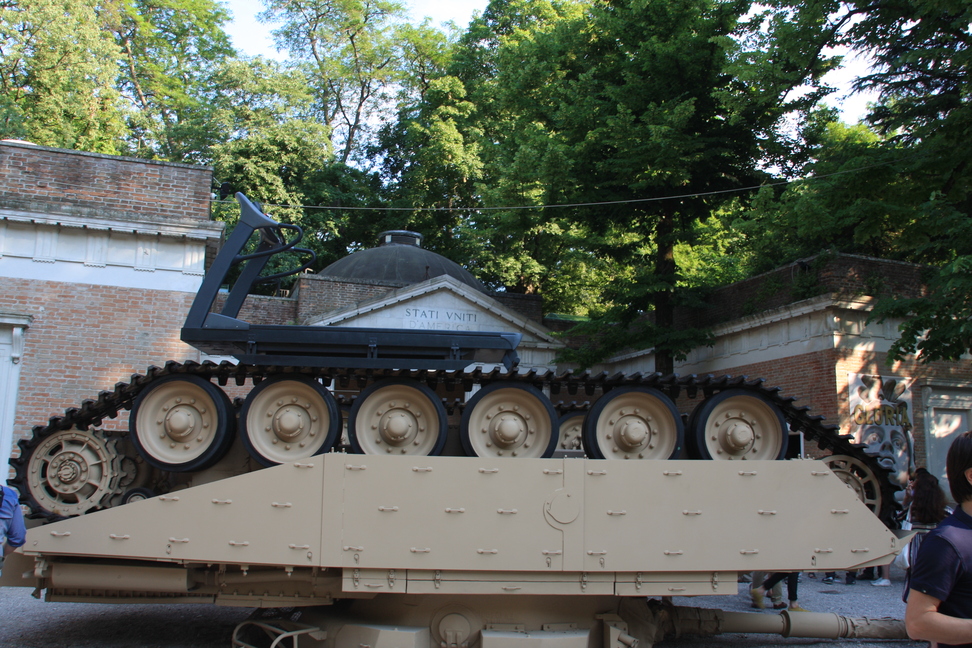 Image: The USA pavilion Photo: by Sky Sharrock
The Pavilions of USA, Israel, Poland and Egypt contained powerful interpretations
of global current affairs, and the Lebanon Pavilion was cancelled altogether, making this a Biennale to remember where world Politics becomes inextricably entwined with international contemporary art, and the relevance of contemporary art as an expression of the human condition is underlined. Jennifer Allora and Guillermo Calzadilla, who represented the USA and are based in Puerto-Rico, created “Olympics of the Art World”, installing a 60-ton tank outside the Pavilion, and hiring Olympic athletes to run on a treadmill fixed to the upturned tank, ironically it turns out that it is in fact a British tank. At the Chinese opening Ai Weiwei supporters held up bags emblazoned with the slogan ‘Free Ai Weiwei’. While “Chance”, conceived for the French Pavilion by Christian Boltanski, examines the over-population of the planet with a giant clock representing the number of people dying each day, juxtaposed with images of newborns -150,000 per
day. 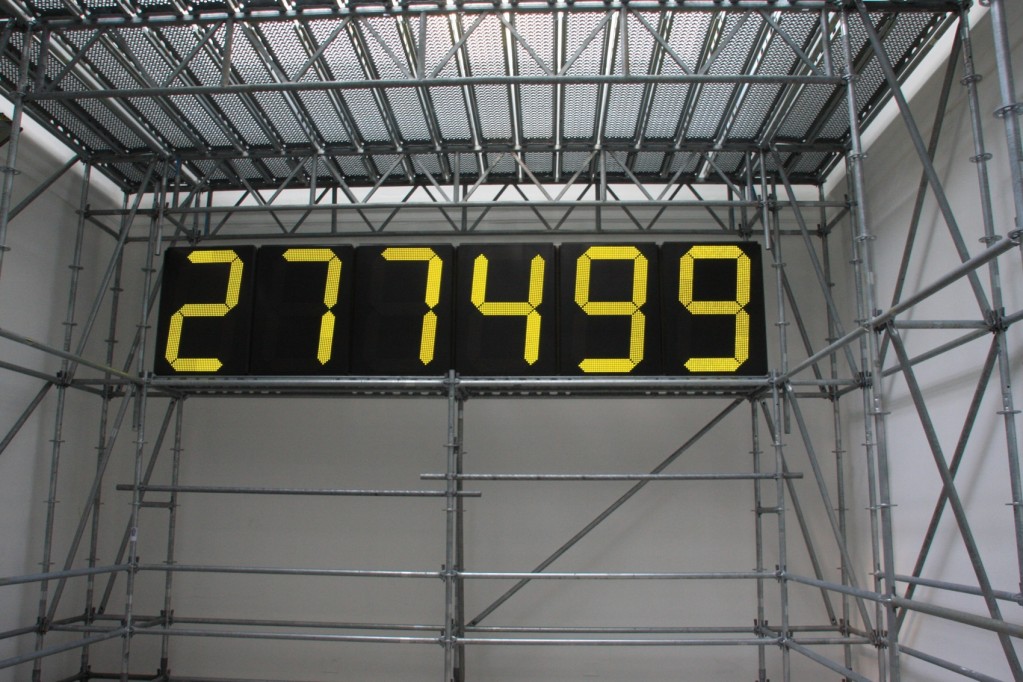 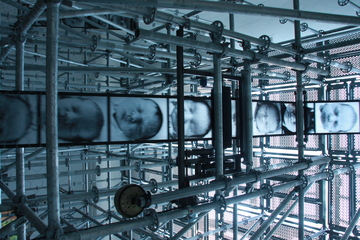 In another reference to war, Lee Yongbaek represented Korea with his exhibition “The Love is gone, but the Scar will heal”. His video performance “Angel Soldier” is intended to express the social conditions of this generation, whilst his “Pieta” series exposes the contradictions of human existence. 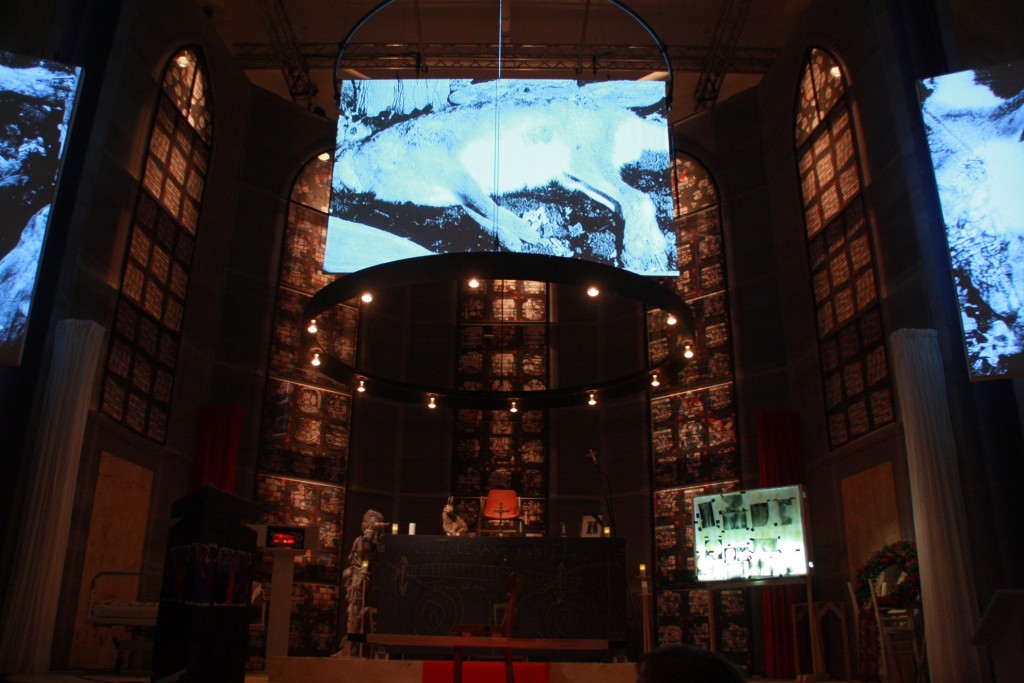 The breathtaking German Pavilion was deservedly awarded the Golden Lion for best national participation. Any artist would find it difficult to ignore the legacy of the Pavilion, which was co-opted by the Nazis in 1938. Christoph Schlingensief, who died in 2010 of cancer, was posthumously awarded for his eery multimedia installation, which gives some insight into the experience of his fatal illness, and features the stage of the Fluxus Oratorio A Church of Fear vs. the Alien Within, part of his illness trilogy. 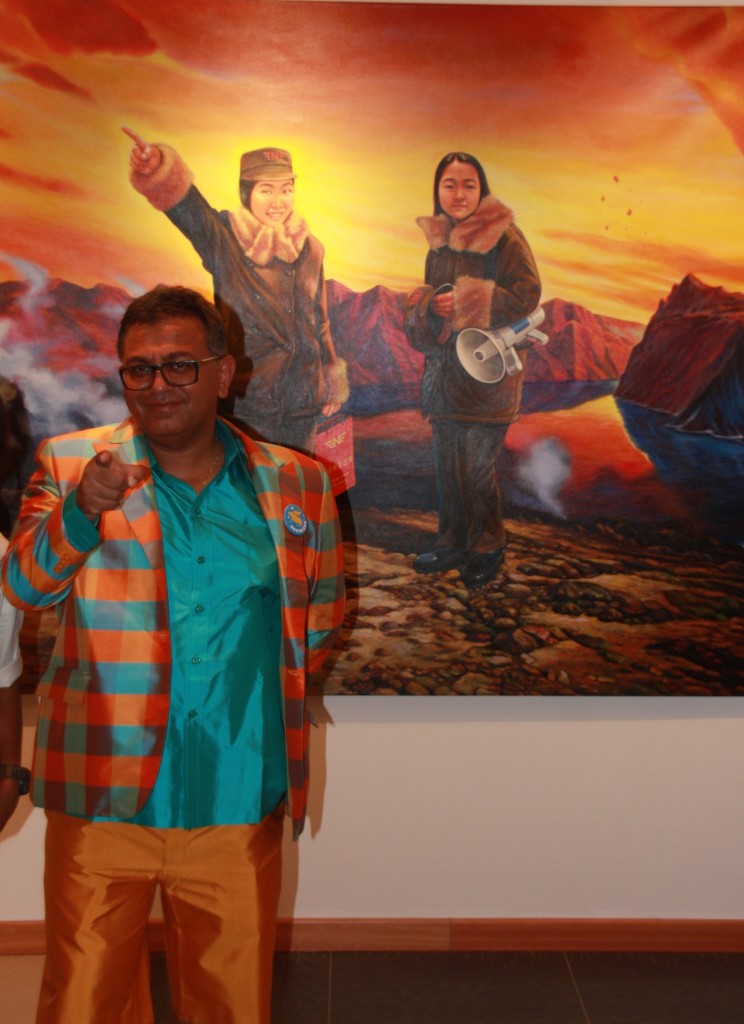 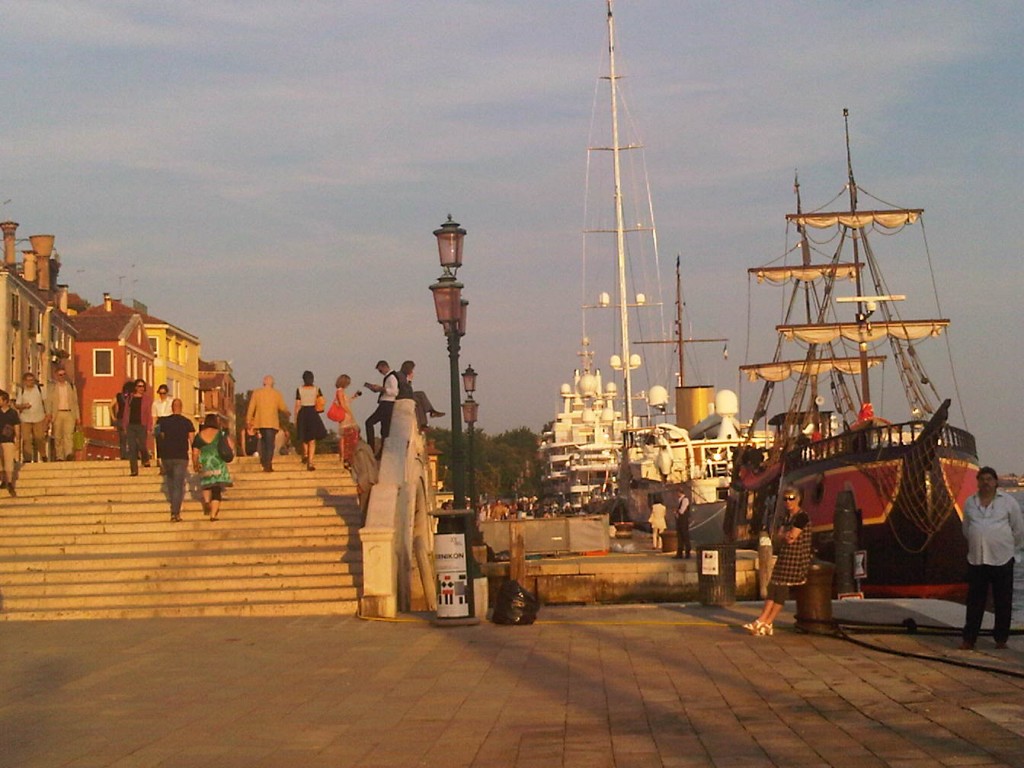 Upon leaving the Giardini and strolling towards the Arsenale, it was impossible not to notice the ostentatious display of wealth in the form of Russian Oligarch Roman Abramovich’s super-yacht, which ruffled the feathers of the Venetian authorities, who accused him of turning St. Mark’s Basin “into a motorway”. Then a giant
pirate ship attempted to moor by Abramovich’s yacht “Luna’, and was turned away by the Carabinieri. “Pirate Camp” or “The Stateless Pavilion”, was an initiative of the Italian Pavilion, and designed as a travelling vessel for 16 international artists. 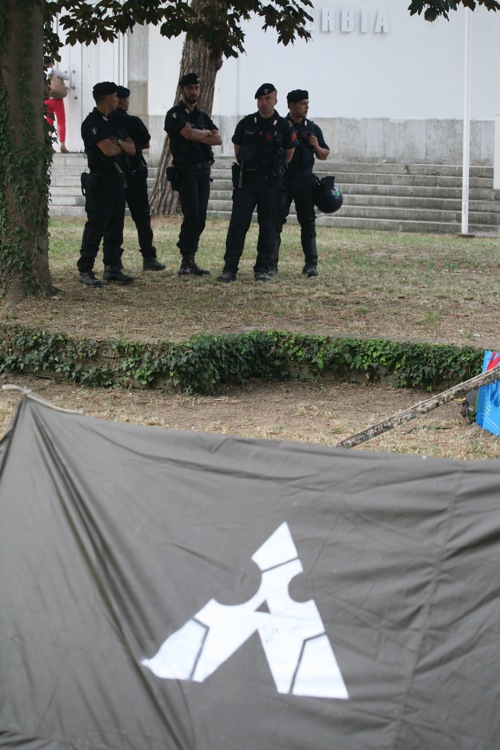 Sigalit Landau is representing Israel in Venice, and her exhibition “One Man’s floor is another man’s feelings” is a complex and moving display of sculpture, video and multi- media, referencing the struggle for territory and referring to Landau’s experience of the Dead Sea.

En route to the opening of Polly Morgan’s exhibition at Workshop arte contemporanea, our Vaporetto was prevented from moving and all traffic on the canal halted as Carabinieri zoomed along the Canale Grande, in a Venetian version of a road block, a boat full of Italian police hot on the heels of a vessel containing secret police, faces concealed with black masks. A Paparrazzo stood next to me with a zoom lens, and told me it was Shimon Peres going to the opening of the Israel Pavilion. Finally we made it to Polly Morgan’s opening, in a beautiful little gallery called Workshop in Dorsoduro. Polly had created some wonderful new work, including her signature birds in bell jars, and a new sculpture of a human form covered in rainbow-coloured ribbon, with birds suspended in the air winding more ribbon around the figure. 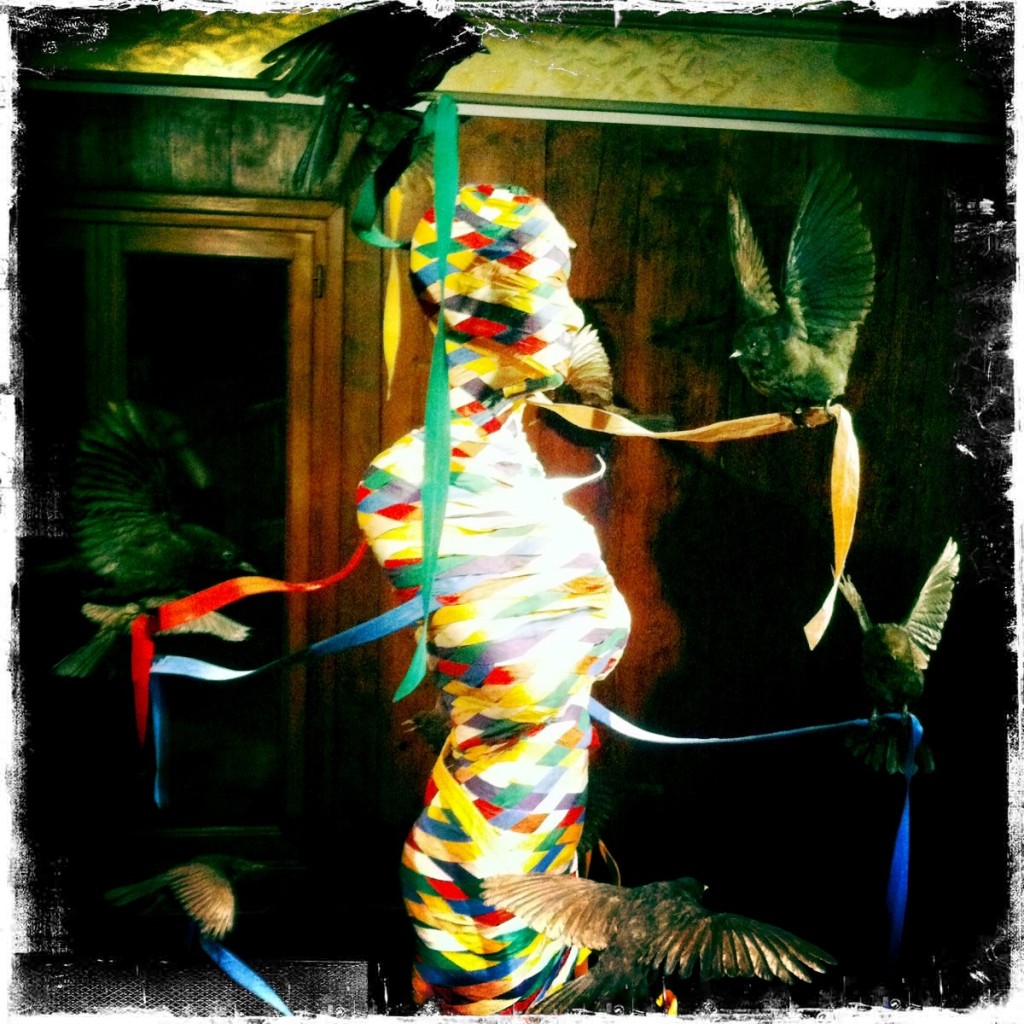 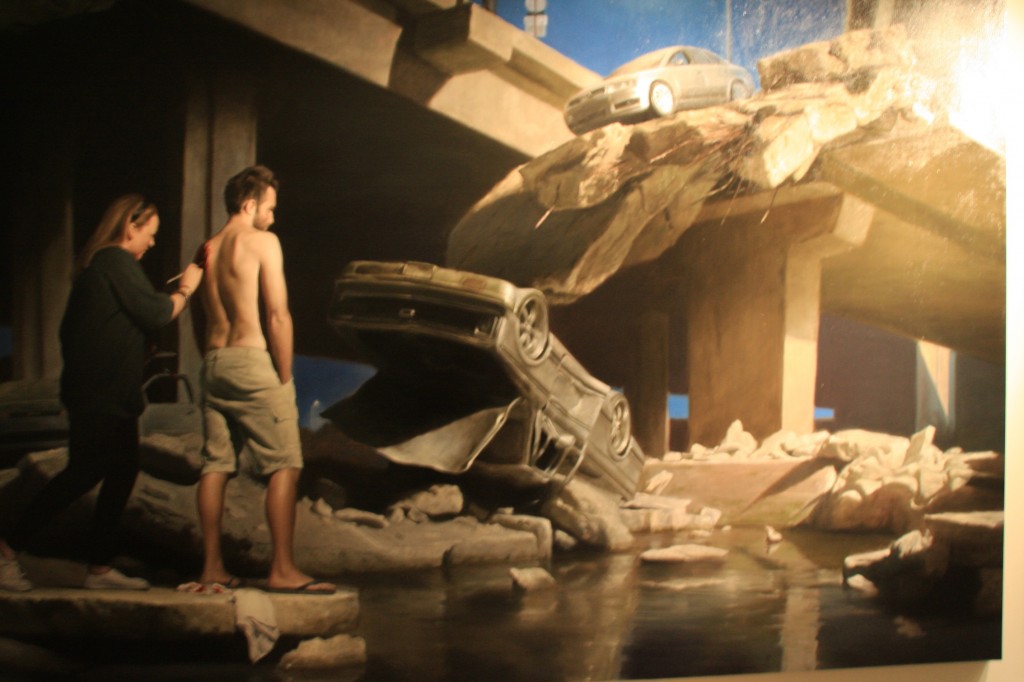 Joe La Placa, Director of All Visual Arts in London, told me that some of the artists
he works with were exhibiting in “The World Belongs to You” at the Palazzo Grassi,
Francois Pinault’s museum, so we headed there and were blown away by the tactile, cheerful, organic sculpture of Joana Vasconcelos, Jonathan Wateridge’s exquisite paintings of film sets, and Loris Gréaud’s installation “Gunpowder Forest Bubble”. 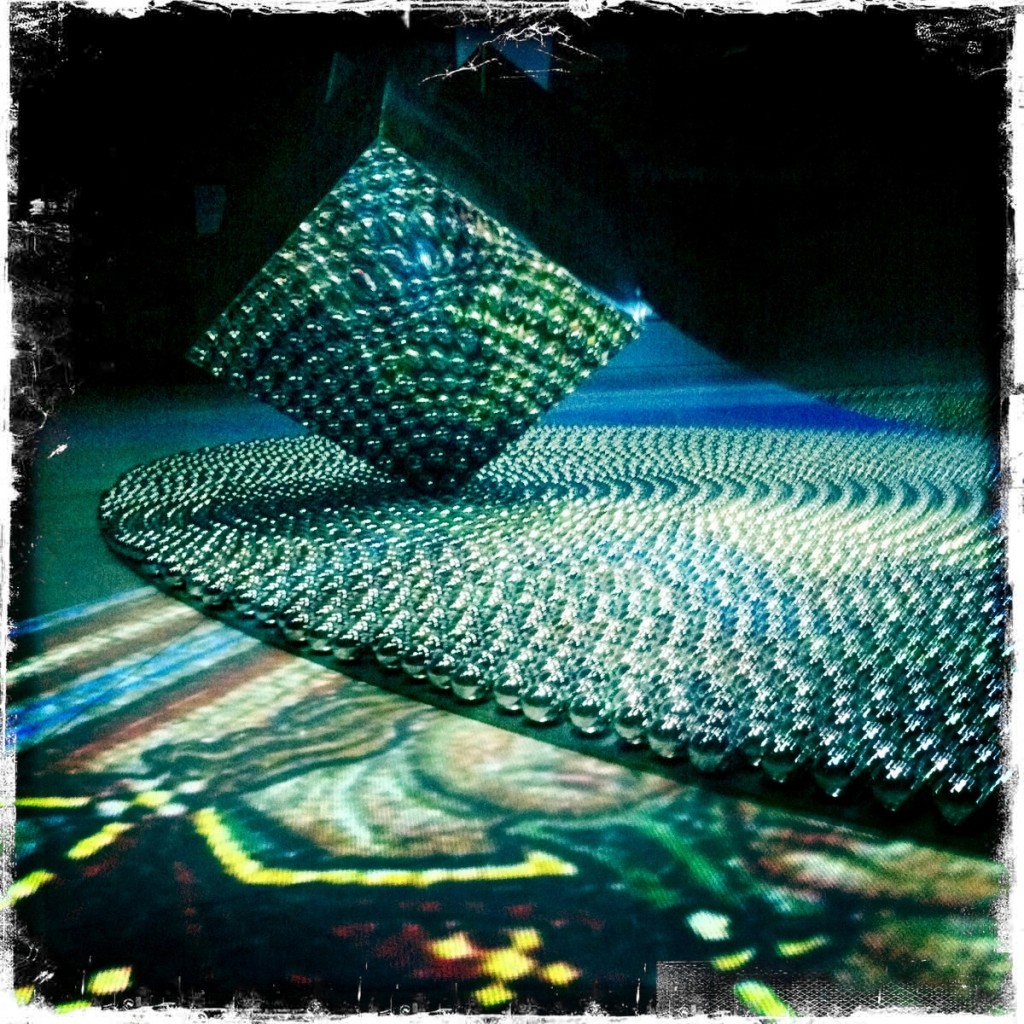 Image:Shadia and Raja Alem The Black Arch Photo:Sky Sharrock
For me the highlight of the Arsenale, which features 83 artists from all over the world responding to questions of identity, was “The Black Arch”, a collaboration between sisters Shadia and Raja Alem. Representing a meeting of darkness and light, the dramatic installation presents the artists’s interpretation of Black as a non-colour, and fuses experiences of the two cities of Mecca and Venice, with an overlaying narrative inspired by the stories their aunts and grandmothers told them during their childhood in Mecca.

Other highlights were Urs Fischer’s reworking of Giambologna’s “The Rape of the Sabine Women” in the form of a huge candle, and Song Dong’s Parapavilion, a
recreation of her parent’s 100 year-old home in China, hosting artwork by Ryan Gander. 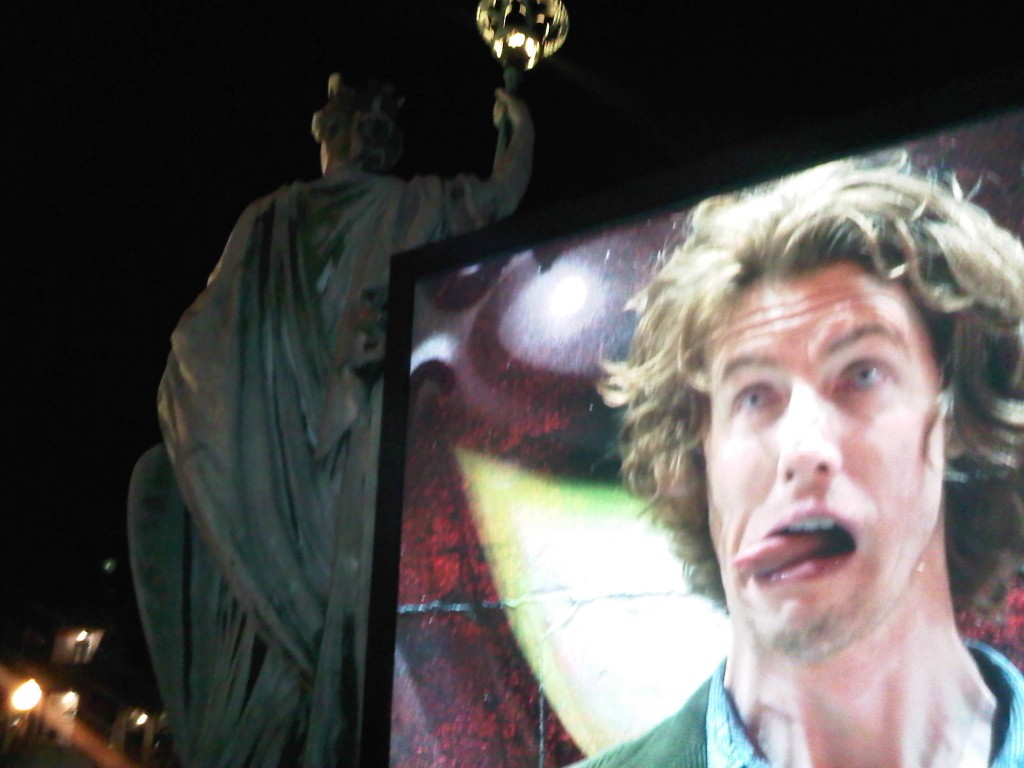 Image: Dash Zhukova’s party – Commercial Break Photo:Sky Sharrock
Evening fell and we made our way to the British Party in an old squat, where an amazing African band got people moving on the dance floor, before we headed for Dasha Zhukova’s party on the terrace of the Bauer hotel. After seeing the emotionally and politically charged artwork on display in the Giardini, the decadence of the party felt ironic, and proof that even if the world is in political and financial turmoil, the party still goes on for an elite few. Zhukova, who runs the Garage Center for Contemporary Culture in Moscow and is the partner of Roman Abromavich, curated “Commercial Break” with Alex Dellal and Neville Wakefield, an exhibition of cutting edge video art.

After we made it through the two-tier security system, and past rich young men who had no reservations about elbowing women or elderly collectors out of their way while fighting to get into the party, we sipped martinis on the terrace, and surveyed the stellar crowd which included fashion designer Francesca Versace, artists Richard Philips and Marina Abramovic, and musicians Courtney Love and Michael Stipe. Chatted to Rebecca Wilson of the Saatchi Gallery, and her husband Geoff Dyer, whose novel “Jeff in Venice, Death in Varansi” sums up perfectly the excesses of the Venice Biennale experience. His altar-ego in the book, journalist Jeff Atman, drinks and drugs his way through the parties and private views of the Biennale, summing up the pursuit of decadence and status thinly veiled as a quest to experience the cultural offerings of the world. 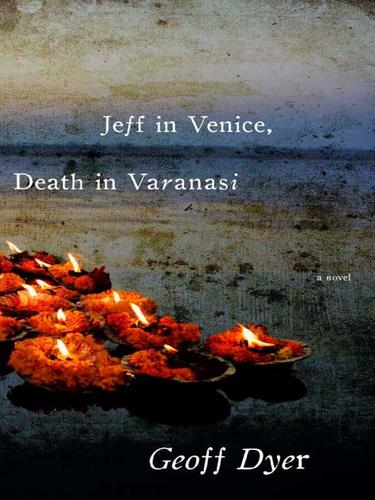 One thought on “Biennale Bedlam by Lee Sharrock”