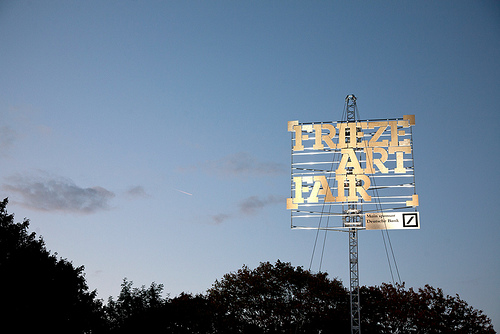 This article titled “New Masters fair should end the classic art Frieze-out” was written by Jonathan Jones, for theguardian.com on Friday 20th May 2011 14.11 UTC

Lo and behold, the art world has discovered that time is not flat. We do not occupy an eternal present. There were artists before we were born, and there will be artists after we die.

The organisers of the Frieze art fair have announced a fascinating new venture. The headline news may be that in 2012 this hugely successful London event will inaugurate a New York clone of itself, but that is not the surprise – merely the necessary next step on the road to their global art empire. No, the really interesting thing is that in addition to their contemporary artfest in London’s Regent’s Park they will launch, in autumn 2012, a new London fair called Frieze Masters, which they say “will give a unique view of the relationship between old and new art”.

This parallel event to the contemporary show will “present approximately 70 international galleries showing work made before the year 2000, ranging from antiquities and old masters through to art of the 20th century”. There will be talks and educational activities, and it’s all being done with the backing of Dr Nicholas Penny, director of the National Gallery.

Well … great. I mean, stupendous. This is the best news for art in Britain in years, for it will help restore a civilised balance to the nation’s visual culture. The passion for new art that has swept 21st-century Britain is exciting, but it has sometimes been presented as a crass choice between old and new – just look at how often the debates on this blog seem to divide between “modernists” and “traditionalists”. If any one event was seen as the proof that Britain had finished with fuddy-duddy old JMW Turner and now only cared about Bob and Roberta Smith, it was the all-conquering Frieze art fair. So in revealing another side to their interests, the organisers are going to change the game. New and old, now and then, feed off one another in a healthy culture and in all serious art. It turns out Frieze knew that all along.

Others are more qualified than I am to comment on the economic implications of Frieze Masters (are the organisers cannily recognising the appeal of the solid historical market in unstable times?). However, it does seem that Frieze is reflecting the mood of the field now. Artists are embracing a rich variety of historical inspirations. The ICA is shortly to open an exhibition by Pablo Bronstein that revels in 18th-century art and architecture; the Turner prize in recent years has celebrated frescoes and folk songs; and the Venice Biennale is about to go nuclear with Tintoretto.

New art is not an orphan: it is the child of history. Frieze Masters will make it easier for everyone to see that. This is a fantastic idea.