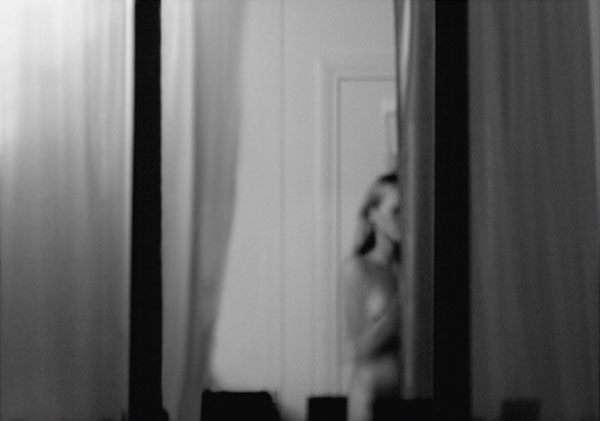 Carmichael Gallery is pleased to announce Breach of Privacy, a group exhibition featuring works by Yasmine Chatila, Hilo Chen, Adam Krueger, Alyssa Monks and Jaclyn Santos, five New York-based artists whose creative practices span a disparate range of media, yet coalesce to represent compelling explorations of voyeurism in its shifting states of ecstasy, release and isolation. Via exhilarating photorealistic oils, hauntingly subtractive mixed media works and raw black and white photography, each artist fashions his or her own unique voyeuristic allegory, some oblique, others candid, but all bound by a bittersweet philosophical thread that delves far deeper than that which is externally revealed. 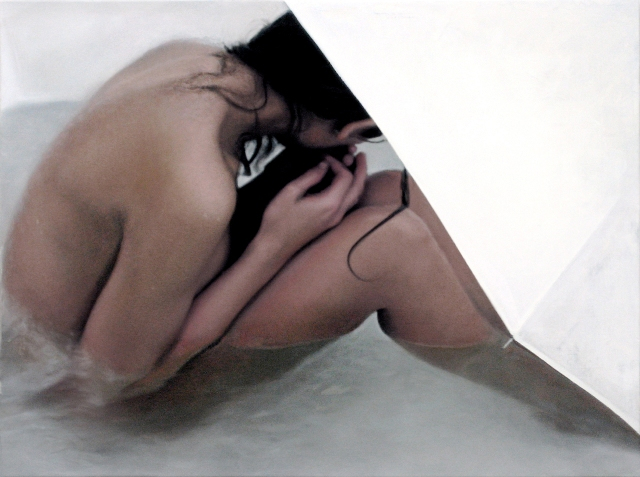 Life is filled with glimpses of private moments and the artists in Breach of Privacy capture these experiences of curiosity, attraction and idleness by employing various forms of visual realism to depict a fleeting instance in their subjects’ lives and create a non-linear narrative in which the viewer is encouraged to be complicit. In their fluctuation between delicacy and darkness, the works of art both reference the poignant beauty implicit in the nature of voyeurism and brazenly confront the societal mores that condemn the shameful exhilaration such an act can provoke in the human being’s mind and body. Chatila, Chen, Krueger, Monks and Santos portray these revelations of illusion or disillusion in a manner that is equally sophisticated, skillful and considerate, offering viewers a more informed critique of contemporary life and relationships, whether real, imagined or simply viewed ambiguously from afar.

There will be an opening reception for Breach of Privacy on Saturday, May 21 from 6 to 8pm with Adam Krueger in attendance. The exhibition will run through June 11, 2011.

Yasmine Chatila (b. 1974, Cairo, Egypt)
The photographs and videos that comprise Yasmine Chatila’s captivating Stolen Moment series seize fleeting flashes of human behavior viewed through the windows of New York City’s architecturally stunning apartment buildings and transform them into timeless, edifying expositions of the world around us. In a recent conversation in Interview Magazine, Chatila elucidated of her works, which recall the spirit of movements such as German Expressionism and Film Noir, “My goal is to capture the moment and distill its essence without exposing anyone’s identity. I am not interested in who these people really are. Not knowing allows me the freedom to project onto them and fill in the gaps with my imagination.”

Chatila graduated with a B.F.A. from Parsons, an M.F.A. in photography from Columbia University School of the Arts in New York in 2002 and is the recipient of numerous awards, fellowships and grants. Select galleries and institutions that have recently exhibited her work include Museo Reina Sofia, Madrid, KunstWerke, Berlin (2009) and Edelman Arts, New York, John Kohler Arts Center, Wisconsin (2008). Film festivals her work has been honored in to date include the Locarno Festival, Locarno (2007), Kunst Film Biennale, Cologne (2008) and Centre Pompidou, Paris (2009).

Chatila and her work have been profiled in Interview, Art in America, Wired, Foam, Blackbook, NY ARTS, Art Actuel and Dazed and Confused, amongst other national and international print and online media outlets. She currently lives and works in New York. 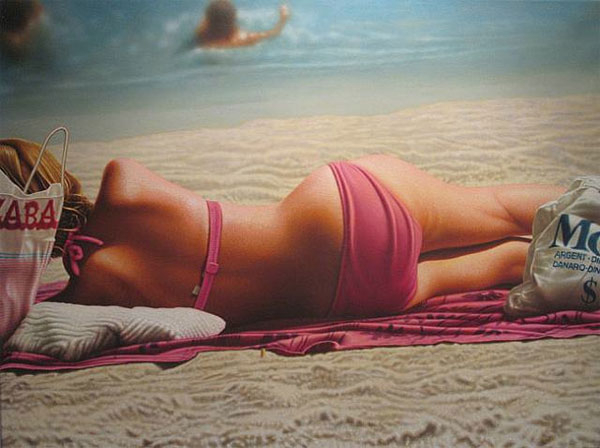 Hilo Chen (b. 1942, Yilan, Taiwan)
Hilo Chen’s hyper-realistic renderings of the nude or semi-nude female form are breathtaking both in their beauty and craftsmanship. Whether lounging on a beach or emerging from a bathtub, the individual depicted in Chen’s oils on canvas often appears with her face either turned away or not depicted at all. An artistic choice intentional in its means of protecting the female’s identity without alienating it, it also affords the viewer to observe and admire her physical perfection without the guilt that the voyeuristic tendency toward such intensely visceral eye candy might otherwise induce. Chen’s uncompromising persistence in transgressing the conservative line that continues to be drawn between sexual controversy and the celebration of it has only served to forward his lengthy, successful career.

Chen graduated with a B.S. in Architectural Engineering from Chung Yien College in Taiwan in 1966. Select galleries and institutions that have recently exhibited his work include Bernaducci.Meisel.Gallery, New York (2006, 2008) and The Benton Museum of Art, Connecticut (2008). His work is represented in major international public collections, including The Solomon R. Guggenheim Museum, New York, San Jose Museum of Art, California, Taipei Fine Arts Museum, Taipei and Taiwan Museum of Arts, Taichung, as well as in numerous private collections.

Chen and his work have been profiled in Playboy and American Art Collector, amongst other national and international print and online media outlets. He currently lives and works in New York. 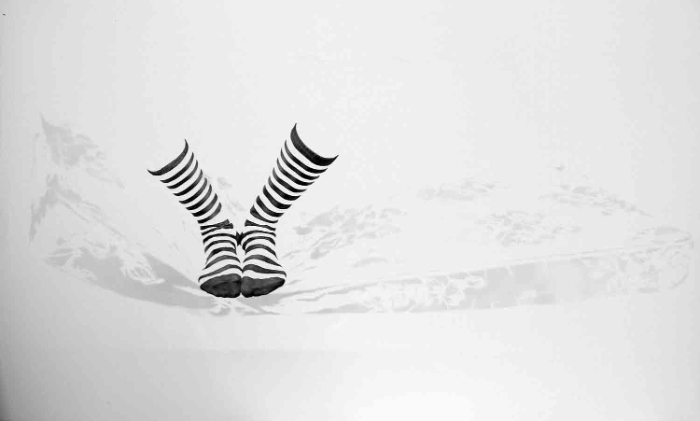 Adam Krueger (b. 1982, Elburn, IL USA)
Adam Krueger’s elimination of key parts of a female’s body in an individual piece, whilst simultaneously emphasizing enigmatic shapes and colors via hand-cut stencils and atypical mixed media, seductively draws viewers in and invites them to complete the image in the privacy of their own mind. At once symbolic and surreal, the concept of voyeurism takes on a new meaning when interpreted by Krueger. Ironically, or perhaps intentionally, the technical effortlessness with which he executes his work takes an affable second place to his ability to transform the entire wall, room or gallery setting in which he places it. This genius for innovative installation of his already genre-defying artwork only serves to emphasize the unique aspects of his creative practice. The negative space beyond the piece of art itself has no chance against Krueger, whose work literally knows no boundaries.

Krueger attended Santa Reparata International School of Art in Florence in 2003 and graduated with a B.F.A. from Rhode Island School of Design in Rhode Island in 2004 and an M.F.A. from the School of Visual Arts in New York in 2006. He is the recipient of several scholarships, including the School of Visual Arts Fine Arts Award (2005, 2006), RISD’s Trent Burleson Painting Prize (1st Place) and Award for Pictorial Excellence (2004) and winner of the Congressional Art Competition (1999, 2000). Select galleries that have recently exhibited his work include Coleman Burke Gallery, New York (2010), Deitch Studios, New York (2009), Marlborough Gallery – Chelsea, New York, StolenSpace Gallery, London (2008), Art Gotham, New York (2007) and David Zwirner (2006). His work is publically represented in the Erotic Museum of Barcelona, as well as in numerous private collections.

Krueger and his work have been profiled in The New York Times, The Columbia Spectator, The Times Argus, The Daily Herald and Boink Magazine, amongst other national and international print and online media outlets. He currently lives and works in New York. 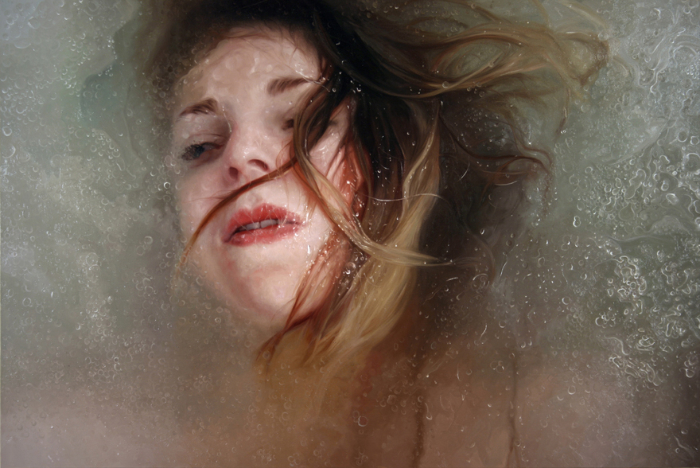 Alyssa Monks (b. 1977, Ridgewood, NJ USA)
Sultry condensation, distorted bubbles and disheveled wet locks offer a tense, but thrilling contrast to the otherwise still waters that envelope the breathless faces at the heart of Alyssa Monks’ larger-than-life oils on linen. Whilst the mysterious, innocent detachment of her subjects’ expressions may lead some viewers to question whether these girls are aware that they are being observed at such close quarters and if so, should they wish to be, Monks’ intuitive ability to unravel such irrelevancies to reveal a greater message make these questions evaporate faster than steam. As she once observed, “Realism and Abstraction are in a symbiotic relationship – they need each other to exist and eventually become the same.” A notion contemplated, let alone attempted, by few artists, it is accomplished time and time again with the graceful, otherworldly ease of Monks’ brush.

Monks and her work have been profiled in The New York Post, Daily Mail, Telegraph, La Repubblica, ARTnews, The Detroit News, Harper’s Magazine and American Art Collector, amongst other national and international print and online media outlets. She currently lives and works in New York.

Jaclyn Santos (b. 1984, Pittsburgh, PA USA)
Jaclyn Santos crafts tender but unabashed oils on canvas that flout the clichéd notions of femininity to produce an unexpectedly multi-faceted array of intelligent opinions on this theme. “As an artist and individual, I have always been concerned with themes of sexuality and spirituality, and through my narrative paintings of women I embrace and question this supposed dichotomy,” Santos explains. The contemporary cultural channels uncovered and traversed in her works, which “also typically explore themes of voyeurism, vulnerability and identity,” exude a subtle sensitivity and quality of isolation in a manner that both male and female viewers connect with and embrace.

Santos and her work have been profiled in The Baltimore Sun, Female Persuasion, Art Scout TV, In The Air and Gallery Beat, amongst other national and international print and online media outlets. She currently lives and works in New York.