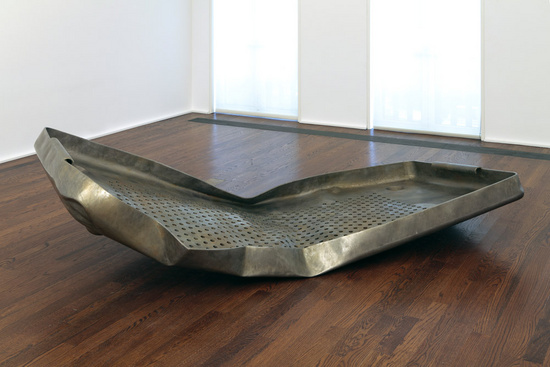 Hauser & Wirth New York will present ‘A glass of water,’ its first exhibition devoted to internationally admired artist Subodh Gupta. Comprising a group of sculptures, optically incandescent paintings, and two slyly illusionist installations, the new work on view further extends Gupta’s ongoing investigation into the sustaining and even transformational power of everyday objects and activities. Buttons and cans, steel cups of water, simple bread dough, and the forks and smears of sauce left upon plates after a meal has been consumed, all serve as elements in the artist’s complex choreography of meaning and oppositional values. In the world of Subodh Gupta, the most quotidian objects and experiences lie in perfect equipoise between artistic, cultural, and spiritual abundance and emptiness, the twin companions of all who reside in the era of globalization and diaspora.

Subodh Gupta has long explored the effects of cultural translation and dislocation through his work, most famously using Indian kitchen utensils – particularly his nation’s ubiquitous metal tiffins and thali pans – to demonstrate art’s ability to transcend cultural and economic boundaries. His ideas have taken shape in a variety of different media, from film and video, to steel, bronze, marble, and paint, which Gupta employs for both their aesthetic properties and as conceptual signifiers carrying a wealth of connotations. The mass-produced objects that have played such a prominent role in his art offer an ambiguous symbolism: While they are seen by those in the West as exotic and representative of Indian culture, to those in India they are common items that are used daily in almost every household, from the poorest to the most wealthy. Gupta harnesses these varying associations and, in the process, makes his materials subjects in their own right.

With the exhibition ‘A glass of water,’ Gupta turns his attention to instruments of measurement – and particularly those related to the food and drink all humans measure through either daily consumption or desperately thwarted hunger – as metaphors in a chimerical visual poem about global appetite. Here, the artist explores the opposing tensions of desire and control. A tailor’s measuring tape, shirt buttons and a sieve are blown up into large-scale steel sculptures, establishing the rules of a game in which distortion and tricks of medium ambush viewers’ expectations of value.

In the trompe l’oeil installation work ‘Atta,’ a simple, found wooden table bears a mound of dough that appears to have been measured out and lovingly prepared, but abandoned in the midst of kneading. Daily bread is the staff of life, but Gupta’s dough is inedible: sprinkled and surrounded by real flour, it is a painstakingly painted bronze simulacrum. The complement to ‘Atta’ is an installation work from which the exhibition at Hauser & Wirth New York takes its name. ‘A glass of water’ presents another wooden table topped only with a single metal drinking cup. Inside this cup but just barely contained by it, is fresh water that mysteriously remains in a constant and unyielding state of brimming. Filled beyond capacity and threatening forever to spill at the slightest vibration, Gupta’s simple but precarious offering – encased in a large museum vitrine – serves up a rich metaphor for the almost unbearable tension between luxury and depletion, accumulation and deprivation, acquisition and exhaustion that are the daily diet of exploding international culture.
About the Artist

Subodh Gupta was born in 1964 in Khagaul, the Indian countryside in Bihar state, and is now based in Delhi. Before his education as a visual artist, Gupta, who is passionate about film, was a street theatre actor. The artist’s change of residence from his native village to a major urban center is in a way an allegory of today’s India. The growing middle class that migrated from villages to large cities is eagerly clearing the path for change and the dominance of global capitalist culture. Gupta is interested in what inevitably disappears in the process of such change.