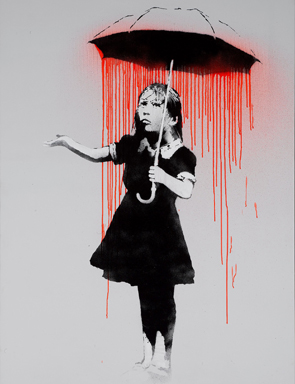 Image:Banksy (British, born 1975) ‘Nola Red’.
A painting, which features one of the images created by the enigmatic Oscar-nominated graffiti artist, Banksy, to commemorate the third anniversary of Hurricane Katrina, is to be sold at Bonhams, New Bond Street, as part of its sale of Post War and Contemporary Art and Design on 13 April. It has attracted a pre-sale estimate of £50,000 – 80,000.

The image was one of more than a dozen murals that Banksy grafittied onto buildings around the city of New Orleans in September 2008. While this image, entitled NOLA, depicts a young girl sheltering from red rain under an umbrella, other pictures included a young boy flying a fridge like a kite and Abraham Lincoln as a homeless man.

Banksy, who, earlier this year, was nominated for an Oscar for his first feature documentary film Exit Through The Gift Shop, said at the time: “Three years after Katrina I wanted to make a statement about the state of the clean-up operation.”
Bonhams’ Post War and Contemporary Art and Design sale is also offering another famous Banksy image, Balloon Girl, 2003, (estimate £30,000 – 50,000), which formed part of his temporary Christmas gallery, Santa’s Ghetto, in 2003.