After the Gold Rush: Contemporary Photographs from the Collection at The Metropolitan Museum of Art - FAD Magazine
Skip to content 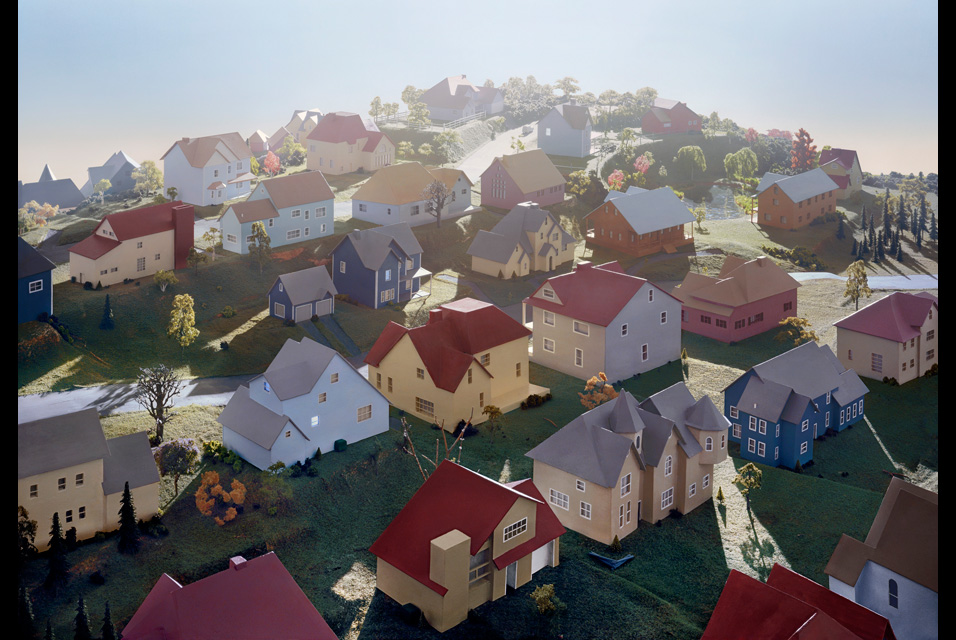 The Metropolitan Museum of Art presents After the Gold Rush: Contemporary Photographs from the Collection from March 22, 2011, through January 2, 2012, in the Joyce and Robert Menschel Hall for Modern Photography. Drawn entirely from the Museum’s permanent collection, the exhibition features 25 photographs dating from 1979 to the present by 15 contemporary artists.

After the Gold Rush begins with Hans Haacke’s Thank You, Paine Webber (1979)—the first work by this legendary provocateur of Conceptual art to enter the Metropolitan’s collection. Haacke’s biting photo-diptych is so pertinent to the recent economic downturn that it seems as if it could have been made yesterday. In this work, the artist appropriated images from the investment firm’s annual report to convey his viewpoint that big business provides a veneer of social concern to mask the brutal effects of the “risk management” they offer their clients.

Other works in After the Gold Rush use varying degrees of artifice and photographic realism to reflect on marginalized and repressed voices. Measuring over 14 feet long and presented as a backlit transparency in a light box, The Storyteller (1986) is Jeff Wall’s signature image and is typical of his method. Working from memory, the artist uses non-professional actors and real locations to meticulously restage a scene of urban blight that he witnessed in his native Vancouver. Wall plays this photographic verisimilitude against compositions and figural poses indebted to French painters such as Gustave Courbet, Edouard Manet, and Georges Seurat. A comparison of Wall’s Storyteller with Courbet’s Young Ladies of the Village (1852), on view in the Museum’s galleries for Nineteenth- and Early Twentieth-Century European Paintings and Sculpture, reveals parallels: in both, a keenly observed moment of telling social interaction taking place on a sloping landscape. Each artist has combined a daringly modern subject with references to earlier art.

Philip-Lorca diCorcia is another key figure in the development of staged photography. In the early 1990s, the artist created a series of works in response to the political attacks on gays and federal funding of the arts in the U.S. DiCorcia hired male hustlers to pose for their portraits out on the streets—and paid them with grant money he received from the National Endowment for the Arts. At the same moment, a wide swath of women artists addressed issues of sexism and racism: examples of this politically pointed art are represented by Laurie Simmons’ Walking Gun (1991)—a spotlighted puppet of doll legs and a revolver that seems capable of turning on its master at a moment’s notice—and Adrian Piper’s 1992 work Decide Who You Are #24 (A Moving Target), which includes a childhood image of Anita Hill as part of a blistering meditation in word and image on racial politics. Such works are missives from a time not so long ago when artists regularly commented on present-day politics and culture through their art. (Because of light-sensitivity, this work by Adrian Piper will be on view through Sunday, September 26.)

Although the recently made photographs in After the Gold Rush seem at first glance to be less overtly political than their predecessors, they nevertheless address vital issues about contemporary society. James Casebere’s epic vision of America, Landscape with Houses (Dutchess County, NY) #1, (2009), is based on a tabletop model that the artist spent 18 months building. The photograph shows a suburban subdivision of the kind recently ravaged by the foreclosure crisis, and its sunny sense of “Morning in America” comments ironically on the country’s future prospects. An–My Lê’s similarly sweeping five-part photographic piece Suez Canal Transit, USS Dwight Eisenhower, Egypt (2009) is also be featured. Lê is interested in the way in which U.S. armed forces come into contact with the rest of the world. This major new work—which seems at first to be a straightforward panorama of military might overseas—subtly undercuts the viewer’s expectations to question the current position of the U.S. on the global stage.

Trevor Paglen is a young artist whose works plot the “black world” of covert military operations, from telephoto images of predator drones taken from miles away, to software that follows planes used for the extraordinary rendition of suspected terrorists. Paglen’s 2008 photograph KEYHOLE IMPROVED CRYSTAL from Glacier Point (Optical Reconnaissance Satellite; USA 186) shows the ghostly white streak of an American reconnaissance satellite bisecting star trails above Yosemite’s Half Dome, a rock formation photographed in the 1860s by artists including Carleton Watkins. To make these and other photographs, Paglen collaborated with amateur astronomers who were originally trained by the U.S. government to look out for Soviet satellites during the Cold War, but turned their attention to American surveillance in recent years.

The final piece in After the Gold Rush is a suite of five recently acquired photographs from 2007–2009 by the celebrated photographer Wolfgang Tillmans. The grouping shifts focus from macro to micro: from expansive aerial views of Shanghai and Dubai to close-ups that suggest the smallest increments of sustenance and regeneration. Taken together, they evoke the interconnectedness of all things and a grounding of the political in the personal as a way for an engaged yet expressive art.