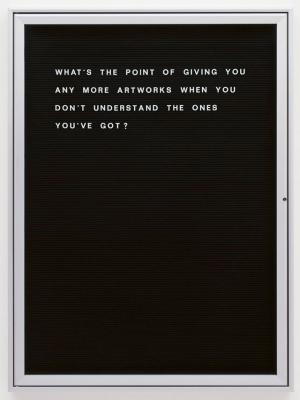 Bethan Huws’ installation at the Whitechapel Gallery erects walls which simultaneously obscure and elucidate the work of Marcel Duchamp, and, in a wider context, the personal experience viewing art. A series of text based pieces which are concerned with context and interpretation, Huws’ work invokes a deceptive objectivity which gives way to wider questions of our own cultural context, and the resonances which these impose upon works we view.

The seemingly perfunctory descriptions of Duchamp’s work, detailing their dimensions, dates, construction and what they look like, are printed on the walls of the gallery and are at once reminiscent of curators blurbs. But here the blurbs become the contentious crucible of artistic debate, composed with apparently transparent objectivity. Yet the pieces are not just evoked, but woven with Huws’ viewing experience.

Contending with Duchamp’s idiomatic French, we are immediately probing issues of translation, with idiomatic language fraught with complications of cultural context. Repeatedly the viewer is positioned at loggerheads (what would a French translation of that present you with?) with phrases which are deliberately contradictory to English translation. One of Huws’ explorations is of Duchamp’s work Coin Sale, an English speaker immediately reads the piece with assumptions that it is a work which concerns itself with currency, an expectation which is confirmed when Huws records that the words are spelt out with 77 American nickels. Yet, the French translation is in fact “Dirty Corner” and the disjunction between bilingual homophones and idiomatic phrases is immediately apparent. Personally, and what else does this installation demand except an acknowledgement of your own cultural associations, the description of Coin Sale was evocative of Paul Valery’s metaphorical likening of language as currency becoming sallied when passed from hand to hand to words accumulating cultural resonances and personal meanings.

Even as a French speaker it took Huws’ work to allow me to appreciate the significance Duchamp’s piece L.H.O.O.Q. Huws recounts that, reading phonetically, the title says “Elle A Chaud Au Cul”, giving way to tributary idiomatic translations of “she’s got a hot ass” and “the police are hot on her tail”. The linguistic resonances are therefore demonstrated as varied, but, presented within the cultural context, the piece gains yet more dynamic significance. The original Duchamp work is as iconic as the piece it subverts, a copy of the Mona Lisa with a graffitied moustache and beard. It’s unavoidably a piece which undermines the reverence of the Mona Lisa, of whom it’s generally accepted that L.H.O.O.Q (here read the first meaning). The quasi double entendre of the title is somewhat indicative of the cultural context, it’s embedded in the story of Apollinaire, at the time the piece was made he had been arrested on suspicion of stealing the Mona Lisa, the police were L.H.O.O.Q (here read the second meaning). So Huws’ describes, elucidates and finally, deliberately, casts the shadow of her own relationship with Duchamp’s work, finishing her description with the emergence of the I / eye, saying “each time I look at Leonardo’s moustached ‘Mona Lisa’ I see Apollinaire, the enigma’.

Huws’ work is an evocation of Duchamp’s work, linguistically enacting their presence for the viewer, who feels them to be teasingly close at hand. Nevertheless, the descriptions force an acknowledgement of our interpretation, no more than the accumulation of cultural echos, the viewing experience inherently subjective as resonances provoke a free fall through memory via the conduits of cultural and personal capital. Viewing Huws’ work demonstrates that Duchamp was creating works and titles purposefully ambiguous and linguistically contentious. Huws, and her invocation of Duchamp, forces you to confront the significance of your own stores of cultural capital, demonstrating them to be immediately irrelevant when trying to approach the task of describing the piece to another, who in turn possesses their own reserve of accumulated cultural references.