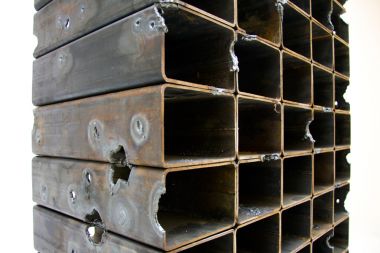 25 February – 2 April 2011
White Cube Mason’s Yard is pleased to present an exhibition of new work by Mona Hatoum. For this exhibition, entitled ‘Bunker’, Hatoum has transformed the gallery spaces into sites of heightened tension,
where global geographies are abstracted and condensed, and themes of mobility, belonging and displacement are explored through three new artworks.

On entering the ground floor gallery, visitors are confronted with Suspended, a room densely packed with red and black wooden swings, appearing like a floating archipelago of islands chained to the ceiling. On closer inspection, each of these 35 swings has the street map of a capital city carved into its seat, randomly chosen from six of the seven continents of the world. Each swing is hung at an oblique angle to its neighbour, creating a sense of geographical dislocation rather than connection, alluding perhaps to the constant flux of migrant communities across the world that shape the contemporary urban experience. The swings are constantly in motion as visitors circulate in and around the space and continue gently rocking even after they’ve left, lending the work an eerie and distinct sense of unease.

For the lower ground floor gallery, Hatoum has created Bunker , a major new installation consisting of what appears to be models of 23 empty and derelict architectural structures. Each basic building structure is made up of stacked steel rectangular tube sections that have been subjected to cutting and burning, giving them the appearance of buildings that have been scarred by war.

Although Bunker seems to be an imagined cityscape, and seemingly generic in form, many of the structures refer specifically to buildings from Hatoum’s native Beirut. As viewers walk among the steel skeletons of these model buildings, each with its own patina of burnt-out holes, we are reminded of the violent conflict that has etched its way into both the physical surface and collective psyche of the city.

In the smaller basement gallery, Hatoum is presenting 3-D Cities, a trio of printed maps of Beirut, Baghdad and Kabul mounted on tables linked by wooden trestles. Hatoum has cut out sections of each map with
delicate crater-like concentric circles that either recede downwards or project outwards from the surface, as if marking the locations of some kind of seismic disruption or areas that have been affected by bomb blast.

Riddled as these cities are with conflict, Hatoum’s beautifully crafted incisions imply both the positive and negative impact of war, where the forces of destruction and reconstruction are manifest.