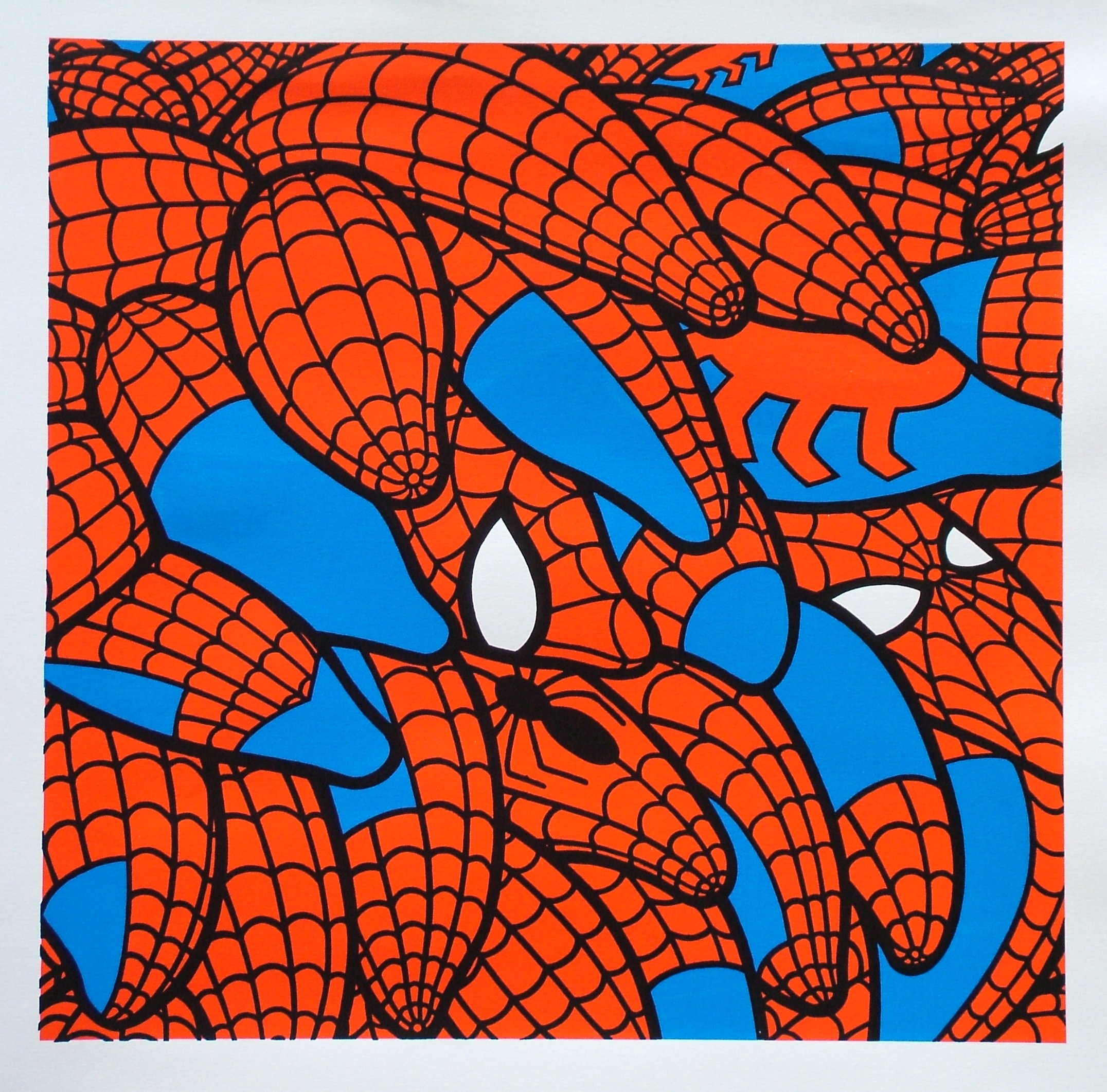 1 If you weren’t an artist, what else would you be?
I’d still be a hoarder of junk. Maybe I’d open my own junk shop. I think I’d be good at that.

2 Name 3 of your least favourite artists.
Only a very tiny percentage of the artwork that I see ever gets me all fired up and excited. It’s not that I think the rest is bad – it’s just that the things that inspire me usually come from areas outside of art, or on the fringes of it. So I don’t really have any least favourite artist (unless you count the artists that a really like but not quite as much as the ones who’s work I really love – I suppose that technically they would be my least favourite), just lots who’s work doesn’t do much for me.

3. Anytime, any place – which artist’s body would you most like to inhabit?
It would be great to have some of the opportunities that certain artists have or have had but I’ve always liked being me and living in my own head so I’ll probably just stick if that is OK.

4 What is your favourite ‘ism’?
Buddhism… oh, you meant art movement ‘ism’.
When I was at University I loved art theory and it really helped my practice to a certain degree but art historians seems obsessed with ‘isms’ and movements and any number of ways of dividing art and artists into either this or that camp. Some artwork interests me and some artwork doesn’t. That’s the only two classifications of art that I need.

5 What was the most intelligent thing that someone said or wrote about your work?
Can’t remember – most of the time people say something to me about my work is while we’re at the opening of a show and I’ve normally had a drink or two by that point.

6. And the dumbest?
Again, I can’t remember but what ever it was, it was probably me that said it.

7 Which artists would you most like to rip off, sorry, I mean appropriate as a critique of originality and authorship?
I can’t see much point in deliberately ripping off other people’s work but as a kid I was obsessed with anything macabre (be it literature, TV, film, comics, animation or whatever) and the short films of animators such as the Brothers Quay and Jan Svankmajer have greatly influenced the sort of sculptural work I produce. Like them I try to make something that looks like it inhabits that half world somewhere between here and the realm of dream or fairy tale.
One thing that I do try to emulate, especially in my drawings, is the natural flow of organic forms. I love the functional aesthetics of nature and I have a bit of an obsession with roots, vines, tendrils and tentacles. They frequently appear in my drawings – either as an aspect of nature or as a biomorphic bridge between the geometric world of the man-made and the world of the organic.
Growing up in rural(ish) Shropshire probably had a big influence on my appreciation of natural forms. As a kid I would spend a lot of time exploring woods and field, and always marvelled at the easy with which nature reclaimed areas of man’s intervention. It was amazing growing up in the place that saw the birth of the industrial age, and being able to play amongst the ruins of old mills, kilns and giant bits of rusting machinery.

8 Do you care what your art costs? State your reasons!
Yes, to a certain extent. It’s very expensive and time consuming being an artist and the price of your work should reflect not only this but also the life time of practise and artistic development that went into getting you to the point you are at now. However, saying that, I don’t know of many artists that don’t make art for the love of it – so even if no-one was willing to buy my work, I’d still be making it.

9 What are the three big ideas that you would like your work to express?
I don’t know if my work expresses big ideas. My work tends to come out of a jumble of personal obsessions, observations, foibles, interests and minor anxieties. There are lots of re-occurring themes or motifs that surface in my work though. There is the roots or vines thing, as previously mentioned, but there’s also my love of boxes and containment. My tower and box sculptures (all on wheels) came about through anxieties about frequently moving from place to place and the logistical issue of transporting possessions. This probably all stems from my earlier experiences as a child when I had to move home a lot (often at a minute’s notice and in the dead of night) and only being able to take what ever we were able to carry. So the boxes and the tower pieces (where as much stuff is crammed into as small a space as possible) are partly a comment on our need for material possessions with the wheels providing a comical reminder of how this dependence on ‘stuff’ limits our mobility.

But there are lots of other ideas and issues that weave in and out of my work. One of these is memory and its mutable nature. I’ve always been fascinated by the fallibility of memory and how the stories of our own lives, that we tell ourselves, can subtly change over years – like a very long game of Chinese whispers. This is more strongly evident in my pieces that incorporate or recreate childhood artefacts and toys. When I made my life size model kit sculpture, And When I’m a Man (I’ll Think as a Man), I sprayed in a lurid green colour that was closest to my memory of some cheap plastic soldiers that I had as a child – recognising that the memory of the colour was probably inaccurate and an exaggeration of the original colour.

The majority of my sculptural work involves the reworking and assemblage of found objects/materials. And I like to use materials that I feel have a certain ‘resonance’ – a resonance that that is built up by interaction with people or the environment.

10 Are you a political artist?
Not so as you’d notice.

11 How do you start the process of making work?
It varies from piece to piece. With my 2D work I sometimes just get an image that comes to me and I try and render it as accurately as possibly – with varying degrees of success. Although recently I’ve been doing a lot of automatic drawing, where I just sit down and force myself to draw as fast as possible. This I try and do without thinking what the drawing will turn into. Again, this works with varying degrees of success but lots of interesting ideas come out of it and I find it to be a very good way of getting the creative juices (I really don’t like the phrase ‘creative juices’ but it probably best describes what I’m talking about) flowing.

As for my sculptural work – they almost always start with lots of preliminary sketches and working drawings. The first stages of drawing tend to be concerned with building a rough image of how I want the piece to eventually look. The next stage of drawings might be concerned with the logistics of construction and problem solving, although this also tends to be ongoing during the construction process, as I encounter unforeseen problems or issues. But as I said, it varies from piece to piece so these steps change and don’t always apply.

12 What next?
After the initial sketching stage I find the materials that I need and work them into the required shapes – then the building process begins as I join the various components together. Here I’m obviously talking more about my box and tower type constructions. Some other sculptures might be formed in a more organic way. The thing I love about sculpture is that it’s a very process based activity – one where the process or the materials themselves can often inform the next stage of the sculpture’s development. This can turn the finished sculpture into a very different beast than originally intended – or give birth to the ideas for a whole family of related but different sculptures.

It constantly keeps you questioning what you are doing (in a similar way to drawing) whilst also allowing you to loose yourself in the work. That sounds quite contradictory – maybe it’s a Zen kinda thing.
I think that the thing I love most about sculpture is that, for me at least, it feels more truthful. There’s something about making sculpture that allows you to lean deeper into your subconscious and come back out again with a few more nuggets of understanding – but I might be wrong.

14 Complete the following sentence “Blessed art the artists, for they shall make their own worlds.”

15 Complete the following sentence “Blessed are the curators, for they shall arrange the worlds as they see fit.”

16 Complete the following sentence “Blessed are the art critics, for they shall explain these strange worlds.”

17. What is your favourite cheese?
I don’t have a favourite but (fat-free and synthetic cheese aside) I haven’t yet found a cheese that I don’t like – the stronger and smellier the better.

18. What’s next for you?
I’m currently working on a new series of orifice box sculptures. What sets this series apart from my previous box sculptures is a carved orifice set into the front of each piece. However, they are temporarily on hold at the moment as I attempt to fill a new sketchbook before Christmas, so that I can send it off to the Art House Co-Op Sketchbook Project which will be touring around the US early next year.
I will also be exhibiting a couple of sculptures from the 13th January at the new show at Scream in Mayfair – details of which can be found on this link – www.screamlondon.com 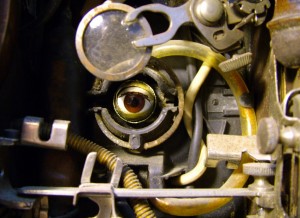 Dreams of Being Batman draws together Wayne Chisnall’s recurring investigations into childhood, memory, and containment with the inevitability of decay.