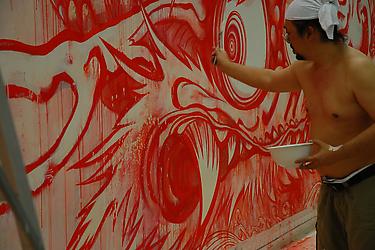 The combination of red and blue with a creature that has long been thought as a symbol of one’s destiny is my attempt to reaffirm my devotion to art – the creative process for the paintings resembled a prayer offering.
–Takashi Murakami

Two epic paintings – Dragon in Clouds – Red Mutation and Dragon in Clouds – Indigo Blue – each comprise nine panels and measure eighteen meters long. Cloud- and-dragon paintings, known as Unry?zu, were also key references for Soga Sh?haku, an eighteenth century Japanese artist whose eccentric and daring visual inventiveness has been a great inspiration for Murakami. The distinctive representations from traditional Japanese mythology allowed Sh?haku to conjure a fantastic world where overloaded ink drips verged on abstraction, transforming the dragon from more conventional depictions into a vivid, animated monster. Unlike the dragon’s dark associations in Western iconography, the Japanese dragon – an amalgam of the Buddhist iconography that originated in India before reaching China and then Japan – is considered a symbol of good fortune and optimism. Several Buddhist and Shinto temples in Japan are designated as dragon shrines that denote the creature’s exalted status. 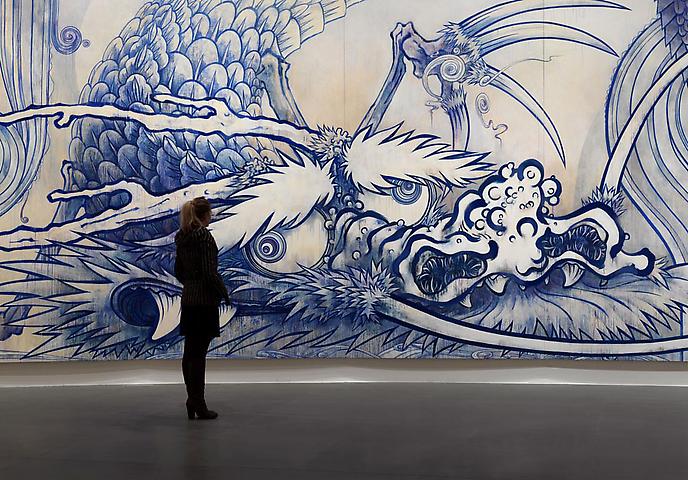 While these monochromatic acrylic paintings depart from Murakami’s usual technicolor palette, he continues to draw on a wide range of influences, from Japanese religious symbols to the popular Japanese video game, Blue Dragon. In Dragon in Clouds – Red Mutation, the volumetric outlines of energized swirls and vast claws sprawl across the panels while the shaded scales of the dragon’s body replicate the effects of saturated ink in Sh?haku’s paintings. The “red dragon” refers to the eponymous novel by Thomas Harris that hinges on an encounter with William Blake’s Great Red Dragon watercolors as well as the munificent powers associated with it in Eastern culture. In Dragon in Clouds – Indigo Blue, frenetic swirls surround the dragon’s pupils and combine with its flared nostrils and serpentine whiskers to create visual turbulence. The scale of Murakami’s paintings underscores the psychological intensity required to create an image that provoked strong reactions when it was first placed in a Japanese temple centuries ago. In Murakami’s gigantic reimaginings, the dragon becomes a prescient reminder of the intrinsic link between art and the psyche.

In his distinctive “Superflat” style, which employs highly refined classical Japanese painting techniques to depict a super-charged mix of Pop, animé and otaku content within a flattened representational picture-plane, Murakami moves freely within an ever-expanding field of aesthetic issues and cultural inspirations. Parallel to the familiar utopian and dystopian themes that feature masses of smiling flowers, elaborate scenes of toonish apocalypse, and the ever-morphing cult figures of DOB, Mr. Pointy, Kaikai and Kiki, he recollects and revitalizes narratives of transcendence and enlightenment, often involving outsider-savants. Mining religious and secular subjects favored by the so-called Japanese “eccentrics” or non-conformist artists of the Early Modern era commonly considered to be counterpart to the Western Romantic tradition, Murakami situates himself within their legacy of bold and lively individualism in a manner that is entirely his own and of his time.