The Barbican Gallery knocks-up a spooked out stage for surrealists past and present. The show closes soon, so get inside while you can! - FAD Magazine
Skip to content 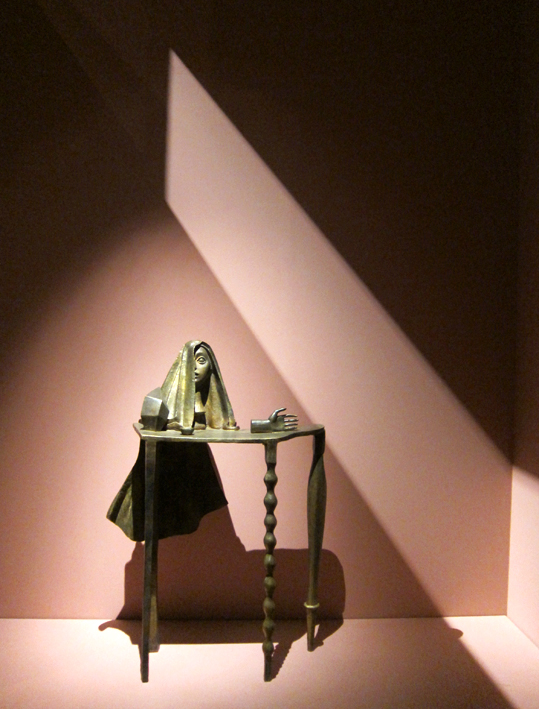 Words and Photography MATTHEW MILES
“There’s gonna be some trouble, a whole house will need re-building – and everyone I love in the house will recline on an analyst’s couch quite soon,” insists a typically distressed Morrissey in ‘Now My Heart Is Full’.

While The Surreal House might not have everything it takes to push you towards hired help – we’ll leave that to parents and lovers – the temporarily transformed Barbican Gallery is a twisting, turning abode in which darkness lurks under the stairs.

The show draws together art, architecture and artefact –including Sigmund Freud’s sinister desk-chair, its modernist leather trapped behind glass and seemingly shaped as much by the wired-up butts of death-row as Fritz Lang’s robots. It was Freud who insisted on the link between the fragile mind and the fractured house, but this show, directed by Barbican senior curator Jane Alison, is the first to explore the importance of architecture and the home in the development of the Surrealist tradition.

“The Surreal House is an intersection between architecture and the unconscious,” says Alison. “With Surrealism, the house is a key metaphor for the mind and the person in the age of psychoanalysis. Previously there’d been a connection between architecture and the body as harmonious proportions. But in the age of Freud and psychoanalysis that house becomes fragmented, distorted and prone to collapse.”
There are no fall-away floors at the Barbican (unless you count a clip of Buster Keaton’s collapsing house), but the gallery has employed architects Carmody Groake to break the lower space into bedroom, bathroom, living room and, naturally, toilet. A long way from an ideal show home, the subconscious rips through the fabric and becomes a trip-hazard – a nursery of reanimated toys; a choir behind that toilet door – while the Femme Maison paintings by the late Louise Borgeoius, with their housework trapped women, are all the more unsettling for being spider-free.

The Surrealists declared the home a platform for playfulness but, like the make-believe of kids, darker impulses kicked beneath the energy and absurdity; were sharpened by new shapes in modernity. At the Barbican, unease and claustrophobia are heightened by use of shadow and, particularly, by the discordant key-clatter of Rebecca Horn’s ‘Concert for Anarchy’, a grand piano suspended above the central room, its innards spewing out with the notes. More random noise than music, Horn’s piece is an accurate focus for the exhibition, as violence and confusion erupts from the polished surface of an object designed for performance.

The tomb of Rachel Whiteread’s ‘Black Bath’ and the gender-gap discomfort of Sarah Lucas’ ‘Au Naturel’ (buckets and cucumbers for adults that never stop playing cars and garages), are the contemporary companions to the spirits of Magritte and Breton, all house guests at the Barbican, along with the likes of Edward Hopper and de Chirico. Dali was surely first on the list, and his presence is felt in the less-intense upstairs space, where connections between architecture and surrealism are more clinically exposed.
Here the slumbering, stilt-propped head of Dali’s painting ‘Sleep’ is juxtaposed with an architect’s model of Office for Metropolitan Architecture’s nineties design Villa dall’Ava. “The link between Dali and Koolhaus was a revelation for me,” admits Alison. “It’s no accident that the most influential architect working today has been massively influenced by surrealism. I wanted to bring that out and make it central to the story.”

Having had the chaos of kitchens and living quarters pressed into you at every turn, upstairs at Surreal House is more like escaping to your room as teen. Watching films on benches – a silent tour of the completed Villa dall’Ava; a spell on the flat but fantastical roof of Casa Malaparte in Godard’s Le Mepris (Contempt); the torched home of Tarkovsky’s ‘The Sacrifice’ – this is space to apply your own narrative and un-logic to windows on a warped world.

Towards the close of the circuit, photographs of Le Corbusier’s Villa Savoye in its post-war dereliction are displayed with a quote by Bernard Tschumi, declaring that architecture is at its “most alive, most meaningful, when on the point of collapse”. It’s a reminder of mortality that echoes with Whiteread’s bath near the beginning; that insists our games and our ghosts will pale against the stage we lend them when the time comes to hand it back.
The Surreal House runs until 12 September www.barbican.org.uk/artgallery.

Matthew Miles is a London based art, culture, script and fiction writer. www.matthewmilescreative.blogspot.com 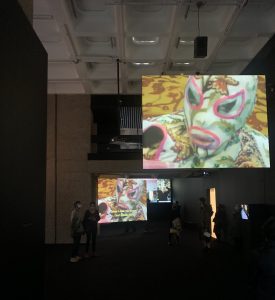 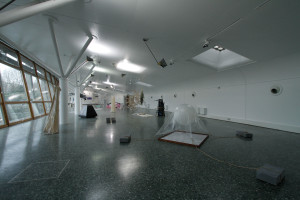 Standing in the Shade is a group installation show discussing aura and affect..

ARTIST OPPORTUNITY: DevArt by Google with the Barbican ENTER NOW

As part of DevArt, Google are seeking to commission an up and coming developer to create a new digital art installation.

Preview: Sex Drugs + Libraries: After Dark with the Last Tuesday Society and the National Trust

It was here that they hosted their legendary salons attended by many literary luminaries including Tennyson, Dickens, Ruskin and Darwin.