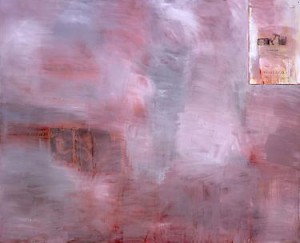 These things looked like something that should be painted.
–Richard Prince

Gagosian Gallery is pleased to present an exhibition of new paintings and related newsprint collages by Richard Prince.

Prince first attracted attention in the early 1980s with images re-photographed from magazine ads, through which he defined for himself the concepts of authorship, ownership, and aura. Applying his understanding of the complex transactions of representation to the making of art, he has evolved a unique signature filled with echoes of other signatures yet that is unquestionably his own.

Begun in 2004 at the juncture of the Nurse and De Kooning paintings and evolving through the Canal Zone and After Dark series, the Tiffany paintings reflect Prince’s continuing attentiveness to the recurring patterns and suggestive potential of advertising, honed by years of perusing newspapers and magazines. These almost abstract, monochrome paintings treat the plain yet distinctive ads that New York’s most famous jewelry brand has run daily for many years in the upper right hand corner of the same page of The New York Times, while echoing associations with another classic, Truman Capote’s Breakfast at Tiffany’s, whose object of desire Holly Golightly lures admirers only to elude them later.

Capote considered his Tiffany to be the strategic marker of the second phase of his career, in which he refined his prose into a clearer and more subdued form before moving on to his crowning achievement, the visceral non-fiction novel, In Cold Blood. Prince’s Tiffany paintings are terse, tenuous combines of material reference and literary allusion comprising, in addition to the aforementioned Tiffany’s ads, scanned news events, obituaries, and the occasional autobiographical note. This field of reference is then painted over in a manner evocative of post-war Abstract Expressionism, from its sedimentary layers and floating blocks of color to the swipes and splatters of its more animated moments. In some cases, words and phrases snatched from the ad copy – “will be girls,” “undecided, and “Picasso”– are echoed suggestively in the titles of paintings; in others, such as Poetry, headlines charged with dread and import loom through obfuscating veils of paint.

An illustrated artist’s book with a text by rare-book expert John McWhinnie has been published in a limited number of copies to accompany the exhibition.

Richard Prince was born in 1949 in the Panama Canal Zone. His work has been the subject of major exhibitions, including the Whitney Museum of American Art, New York (1992); San Francisco Museum of Modern Art (1993); Museum Boijmans van Beuningen, Rotterdam(1993); Museum für Gegenwartskunst, Basel (2001, traveled to Kunsthalle Zurich and Kunstmuseum Wolfsburg; Serpentine Gallery, London (2008). A retrospective survey opened at the Solomon R. Guggenheim Museum in 2007 and traveled to The Walker Art Center, Minneapolis in 2008.