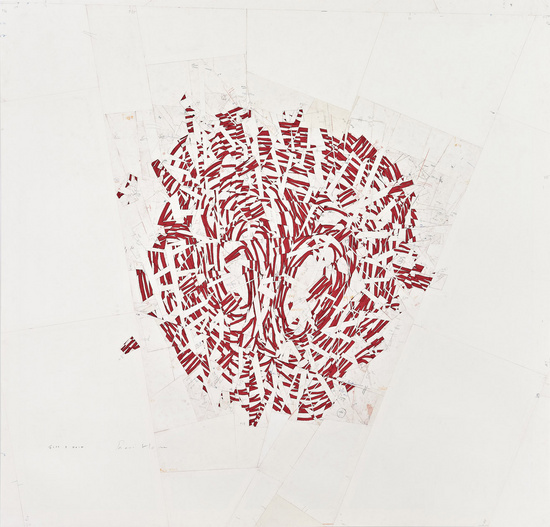 Beginning May 7th, Hauser & Wirth New York will present the first exhibition in the United States ever devoted exclusively to the drawings of artist Roni Horn. The show will include six new, large-scale works never before shown publicly. Up to eight by ten feet in size, these astoundingly complex and ultimately enveloping pieces form a group the artist has titled ‘Else.’ The exhibition will remain on view through June 19th.

Horn’s pigment drawings, which she began in the 1980s, have become increasingly large and more complex. Horn begins with two drawings of similar forms, which she refers to as ‘plates.’ The two plates are then brought together through a process of cutting and pasting to create a new form and identity. These drawings, like all of Horn’s photographic and sculptural installations, continue the exploration of identity through doubling, repetition, and the paired form.

The critic Paulo Herkenhoff wrote about Horn’s drawings: “No matter how dismembered a drawing might be, it is held together by different stages of nearness.
www.hauserwirth.com/