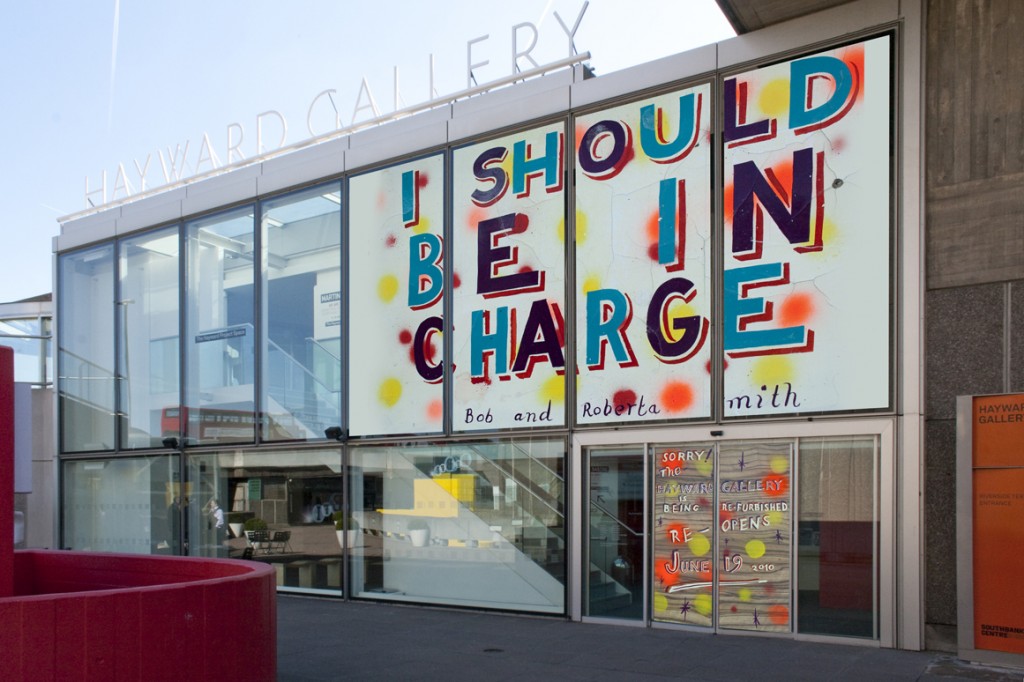 ‘Hey, We’re Closed!’ is a programme of interventions by 13 international artists on the exterior and surrounding space of the Hayward Gallery, during a time in which the Gallery is temporarily closed.

The Swedish artist Annika Eriksson (born 1956, lives and works in Berlin) presents a new work entitled ‘I’m Still Waiting For You’ (2010) from 8 April to 31 May, that makes use of the Hayward’s illuminated sign, causing it to flicker as though it has ceased to function correctly, or as though it were on the brink of blinking out forever.

For her work ‘Buen Viaje’ (‘Have a Good Journey’, 2010) Argentine artist Amalia Pica (b. 1978, lives and works in London) is transforming the interior and exterior of the security cabin beside the Hayward’s car park from 8 April to 31 May into a fantasy environment, taking her visual cues from the customised vehicles of South American truckers. The refurbished cabin will function as normal throughout the Hayward’s period of closure, providing the site’s security staff with shelter from the elements.

British artist Bob and Roberta Smith (b.1963, lives and works in London), will make his mark on the inside of the glass window of Hayward’s foyer with a vast vinyl sign declaring ‘I SHOULD BE IN CHARGE’.

In Many Ways These Exhibitions Will Never Happen is a rolling presentation of posters for fictional exhibitions at the Hayward Gallery, designed by nine international artists. Each participating artist was given a simple brief: to devise a poster for a show to be held at the Hayward Gallery between 2011 and the end of time. No other restrictions were given. Any group of art works – be they real or imagined, from the distant past or from the far future – was permissible. Budgets were infinite. Customary curatorial considerations could be happily ignored.

Presented in the three poster sites on the exterior of the Hayward Gallery during April and May these artists’ posters explore, and sometimes exceed, the limits of exhibition making, asking us to reconsider the way art is contextualised and displayed.

The first set of three posters which will be on show until 18 April are by: Klaus Weber (b.1967, lives and works in Berlin), who proposes filling the Hayward Gallery entirely with water and the odd eel, Ken Lum (b. 1956, lives and works in Vancouver) who has devised an exhibition of the work of famous artist suicides, and Bo Christian Larsson (b.1976, lives and works in Munich and Berlin), whose fictional show is curated by the Large Hadron Collider. A set of three new posters will be unveiled every three weeks until the end of May 2010; Anna Barriball, Lara Favaretto, Loris Gréaud (19 April – 10 May) followed by Erik Van Lieshout, Nathaniel Mellors and Cullinan Richards (10-31 May). Further information on the artists’ fictional exhibitions may be found on www.southbankcentre.co.uk

Hayward Gallery to reopen to the public on 1st August

Hayward Gallery to reopen to the public on 1st August with Among the Trees exhibition and offering free tickets for NHS staff. After more than 20 weeks closed due to the Coronavirus pandemic