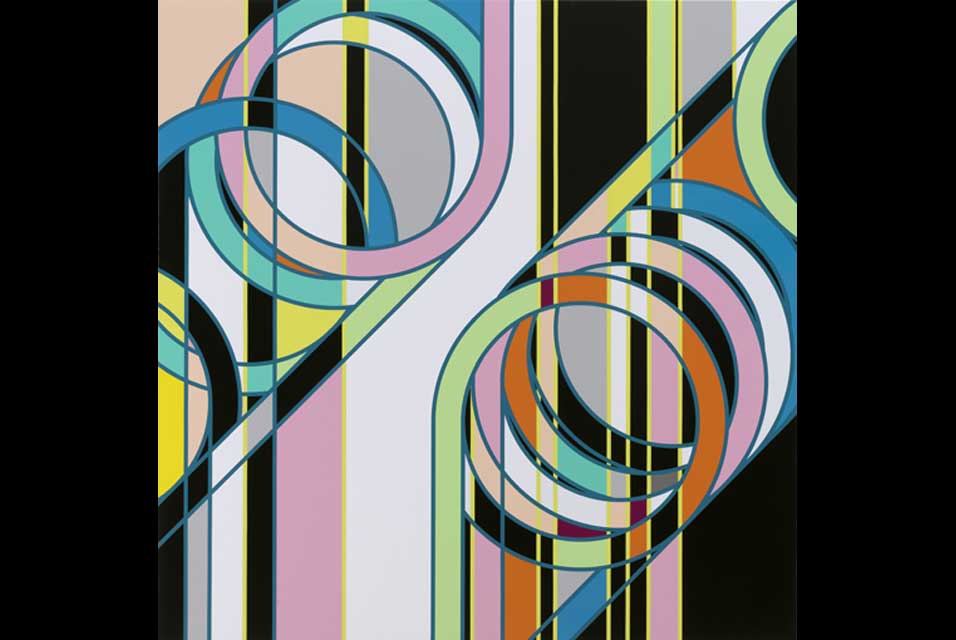 Sarah Morris is an internationally recognized painter and filmmaker, known for her complex abstractions, which play with architecture and the psychology of urban environments. Morris views her paintings as parallel to her films – both trace urban, social and bureaucratic topologies. In both these media, she explores the psychology of the contemporary city and its architecturally encoded politics. Morris assesses what today’s urban structures, bureaucracies, cities and nations might conceal and surveys how a particular moment can be inscribed and embedded into its visual surfaces. Often, these non-narrative fictional analyses result in studies of conspiratorial power, structures of control, and the mapping of global socio-political networks.

In this exhibition, Morris will be exhibiting a new series of paintings, “Knots” and “Clips”. Forms reminiscent of knots or paper clips intertwine. These simple binding structures suggest a transition from enduring utility to contingent organization or text, data and copied material. Morris’s paintings create a form that is continuously splintering and self-generating, and without resolution, creating after-images of capitalism and pre-images of new systems of control. Morris’s project, which spans both painting and film, creates a new level of discourse – playing simultaneously architecture, industrial design, entertainment, commerce and politics. Morris portrays, with beguiling perfection, bureaucratic structures of control and networks and the attempt to mask their own power. The infiltration and use of these mainstream forms and the creation of systems of interpretation that are ambivalent and even possibly contradictory is achieved by engaging and investigating moments of failure toward its use and avoidance.

Also on show is film “1972”. This is the second time (since /Robert Towne/, 2005) that Sarah Morris decided to shift her lens from the wide panoramic view of a city to an intimate portrait of an individual citizen of that city. Georg Sieber was the head psychologist of the Olympic Police and the Munich Police in 1972.?Sieber was hired by the International Olympic Committee and Munich Police to project possible scenarios that would jeopardize the safety of the Olympic Games and prepare the security training that they would require. Contrary to the common perception that the Germans were not prepared, Sieber exposes a very different analysis of what occurred that day: The dramatic hostage-taking of the israeli olympic team by members of the terror group Black September.

The exhibition will also feature Morris’s new film Beijing shot during the 2008 Olympics. Beijing observes the overwhelmingly perplexing and contradictory economy and politics of China, made all the more resonant in the current climate of the global credit crisis. The film explores the spectacle that unfolded during the opening of the 2008 Olympics. Shot from multiple perspectives and given unprecedented access by the International Olympic Committee, Beijing captures the variances within the city, from the urban routine of its citizens to the choreographed actions of various heads of state. Morris employs the notion of duality, coupling it with the constant presence of the spectacle or the event and its constant multiple interpretations. Morris’s version of cinema vérité uses not only architecture and its infrastructure as phantom characters, but also exposes political leaders, Olympic athletes, actors, film directors, and architects in a quasi-narrativ e about this developing city that opens up numerous fictional possibilities and questions the authorship of the spectacle itself and ultimately, the role of the artist.

Art Pictures : An exhibition of new paintings and a film by Sarah Morris.

Image:Poster from the last time London hosted the Olympics in 1948 Twelve artists including Tracey Emin, Martin Creed and Chris […]