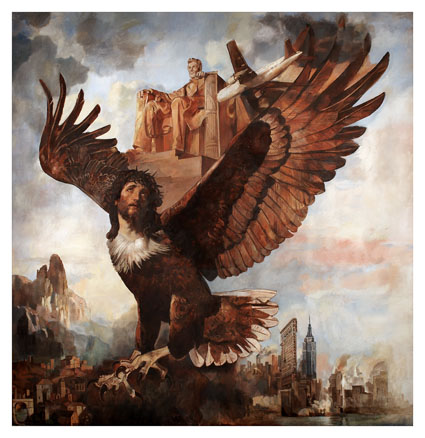 Produced by Alex Dellal’s 20 Hoxton Square Projects, in collaboration with Zoom Art Projects, The Embassy is a multi-disciplinary group show being held during Frieze Art Fair. Curated by Dellal and Xerxes Cook, the exhibition is a parody of outmoded cultural diplomacy in the form of an anonymous country’s embassy, a dystopia whose tyrannical government has tested the patience of its people and brought them to tipping point.

A mixture of painting, sculpture and installation, works featured in The Embassy include a national anthem by the pianist Rosey Chan, a presidential palace built from mud by Alastair Mackie, a flag by Tom Gallant, and former service man, Michael Lisle-Taylor will present his Tournament of the Dirty Nurse, an ornately embroidered boxing ring still covered in the blood, sweat and tears from bouts that have taken place within it. Other works include paintings on old school desks by Oliver Clegg, lungs in three stages of the pulmonary cycle – shock, agitation and panic by Hugo Wilson and caricature regal portraits by Henry Hudson in his distinctive plasticine style.

The Embassy
Less than 100 metres from Regents Park, the BBC headquarters and opposite the Chinese Embassy, The Embassy will take place at the former residence of the Sierra Leonean ambassador to Britain, 33 Portland Place.

As the Internet allows the art, culture and news reportage of countries to become ever more accessible to each other, what were once bastions of this exchange – the embassies of countries wishing to create a dialogue with their host nation – now retreat behind metres of concrete, becoming fortresses of espionage. Globalisation has rendered the sometime patronising kind of cultural exchange once conducted by embassies dated. Yet, occupying a privileged position apart from their host nation – indeed, retaining their sovereignty in a foreign land – these buildings and their interiors provide a revealing glimpse of how a country chooses to represent itself abroad.

The Embassy tells the story of a deposed diplomat representing a government that has just been overthrown at home. A pastiche of the manner in which embassies promote their country’s culture abroad and set across the two floors of 33 Portland Place, works from over 15 artists will speak of themes relevant to the mismanagement of a country – greed, egotism, repression, theocracy, malnutrition, gluttony, tyranny, currency, geography and sex – because the dictator always gets the best lines.

Without wishing to recreate the mise-en-scene of an explicit narrative, the site-specific exhibition engages with the extraordinary history of its location, a 6-floor Georgian townhouse on London’s Portland Place. Between 1954 and 1998, 33 Portland Place was occupied and used as the embassy for the government of Sierra Leone. The Embassy seeks to engage with some of the factors that led to the demise of successive Sierra Leonean governments – corruption, diamonds, personal gain, ethnic conflict, pride, drugs, jealousy – but without being specific to the Western African country or indeed, any other. The Embassy is that of an anonymous country, a very badly managed one at that.
It is, in short, how not to run a country.