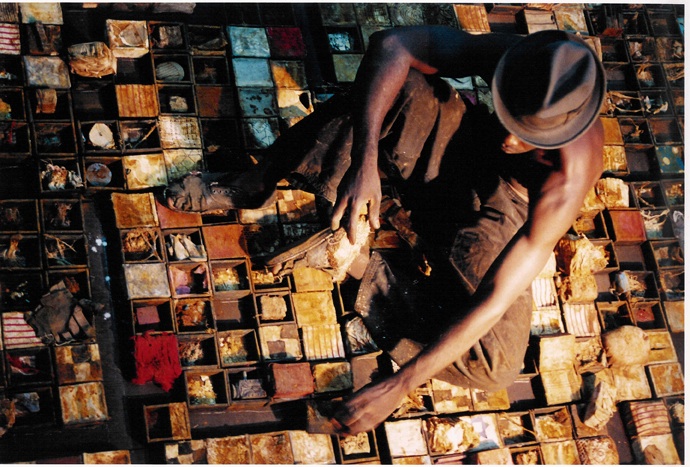 Drew’s sculptural work consists of constructions made of fabricated and collected objects, each item specifically made to look like found pieces. This work is more of a reassembling and a reconstruction rather than traditional assemblage. There is an overall feeling of impermanence to the work with the re-contextualising of the objet trouvé to form items created from scratch.

The rust stained boxes of wood, fabric and assorted metal are formalised and structured. The work can be viewed as bold abstractions, there is grandeur of design, a sense that in spite or even because there is disintegration and dissolution, there is also an order to things, that time and place exists in a continuum.
The overall impression and aesthetic can be likened to ancient building or monument fallen into disrepair and ruin. The architectural forms and integrity remain intact yet the ravages of time have taken their toll. We have a sense that Drew is somewhat of an urban romantic, re-inventing and re-examining objects
and attaching multiple meaning to the seemingly mundane.

One of the most striking qualities of Drew’s work is the sheer physicality and energy of production. The raw cotton is pounded and packed together. The coloured threads are compressed and then pulled apart, like the application of impasto paint with the loose drip effect of abstract expressionism. The photographs of Drew at work in his studio, shows an artist stripped to the waist engaging directly with work, intensely building and a creating with a vital dynamic force. Hence the work contains an authenticity and a conviction of purpose that few can argue with.

Drew was brought up in the poor and desolate surroundings of Bridgeport, Connecticut where all the windows from the humble family apartment looked out onto the Municipal dump. There amongst the discarded detritus of modern urban decay he was to find the source material and inspiration for his monumental and emotionally charged work. These formally abstract compositions engage with the cyclical nature of life, point to our essence of being and in turn become a celebration and reflection on the transient nature of existence.

There is no getting away from the raw content of these overwhelmingly powerful pieces.They are meticulously arranged, loaded with cultural commentary and packed with social connotations.

One can read his work on one level as referencing African American history. The use of raw cotton bales point to the plight of the cotton pickers of the South, as the artist states: ‘I hope when I am no longer here these pieces will stand out as statements on black historical memory which demanded attention: not in a direct way, but in a way that allows everyone to participate and react”.

Leonardo exhibited extraordinary skill as a draftsman from an early age and an encounter with a reproduction of a Jackson Pollock was to have a profound effect on the young artist.

He went on to absorb everything that he saw. He travelled throughout Europe taking in the seminal work of Joseph Beuys, Christian Boltanski, Alberto Burri, Anselm Kiefer, Jannis Kounellis and Antoni Tàpies. The American artists that he admired whose use of material as markers of cultural history were no less significant. Eva Hesse, Robert Smithson and more importantly Robert Rauschenberg were to likewise, leave an
indelible impression. More: FAS