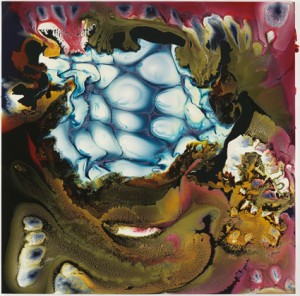 Parasol unit foundation for contemporary art is delighted to present Cloud Choreography and Other Emergent Systems, a new exhibition by 2002 Turner Prize winner Keith Tyson. An exploration of Tyson’s practice, rather than a mid-career survey, the exhibition will bring together several groups of his works, focussing on the systems and processes that inform their creation. The exhibition will also include two new series, his Cloud Choreography and Operator paintings.

The exhibition will be in two parts. The first, in the lower galleries, will feature works that focus on natural processes and systems, and will include works from Tyson’s Nature Sculptures and Nature Paintings series as well as new series Cloud Choreography paintings. These series show a transition from observing the natural world in sculptural form to attempts to recreate elements of it through chemical processes, rendered on large-scale aluminium sheets. In the upper gallery, the second part of the exhibition will focus on Tyson’s mathematical, man-made and process-driven systems, and will include sculptures from the Fractal Dice series alongside paintings from a new series of work entitled Operator Paintings, which will be shown as a series for the first time.

In 2002, Tyson was awarded the Turner Prize for his show Supercollider at the South London Gallery.