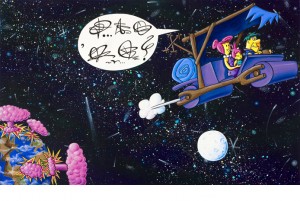 Cosmosescapism 2009, Acrylic on linen, 30 x 48 5/8 inches
Honor Fraser is pleased to present an exhibition of new work by Kenny Scharf.
The exhibition Barberadise showcases new paintings that integrate familiar icons from Scharf’s visual lexicon and implies a utopian world that is at once nostalgically comic and vibrantly cosmic. However, even in this utopia everything is still tinged with the subversive undertone of the disarray that was left behind.

Scharf was born in 1958 in Hollywood, California and grew up as part of the first generation weaned on television. His love affair with the intricacies of popular culture has been evident throughout his artistic career. Scharf cheekily compares his artistic process to watching television. He likes to channel flip but is very loyal to a number of shows. Extending the comparison, some shows may be put on hiatus but they will often reunite and resurface for another episode.

In Barberadise, Scharf combines silkscreen, glitter, oil, spray paint and acrylic paint to invigorate a cast of familiar characters and to flesh out some new ones. He features the Flintstones and the Jetsons careening in the cosmos, exuberant donuts floating in space, fantastical amorphic blobs, and vibrant topographical jungle paintings. He also plays with found newspaper texts that are translated into screened words on canvas. In a number of new works he uses texts from1950s newspapers that were found stuffed in an old sofa. The words evoke a time of nuclear proliferation and political strife. These headlines are eerily current, reflecting similar headlines in today’s papers.

Scharf currently lives and works in New York and Los Angeles. His work can be found in major museums and collections, including the Guggenheim Museum, Whitney Museum of American Art, the Eli Broad Foundation, MOCA Los Angeles and the Stedelijik Museum. Earlier this year Scharf was commissioned to create onsite a 100 foot spray-painted mural at the entrance to the 2009 Armory Fair in New York, where he also had a solo exhibition of new work at Paul Kasmin’s booth. He is also participating in Stages09, a traveling global exhibition whose proceeds will benefit the Livestrong Cancer Foundation. Also in 2009, a comprehensive catalog of his work authored by art historian Richard Marshall was published by Rizzoli.