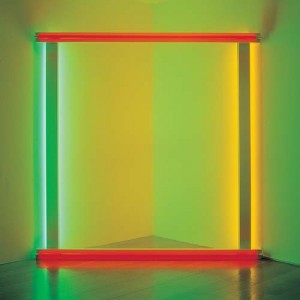 East Galleries 10th September – 31st October 2009
This autumn, Haunch of Venison London will explore the connections between four major artists: Enrico Castellani, Dan Flavin, Donald Judd and Gunther Uecker. This important exhibition will showcase works from 1964 to the present day. All four artists were born within six years of each other (1928-1933) and their practices offer an opportunity to compare the strong aesthetic influences, interests and objectives their generation shared, despite developing on either side of the Atlantic.

Through carefully constructed juxtapositions of work, the exhibition examines how similar problems were addressed and solved by four individuals from significantly different backgrounds. Castellani trained as an architect in Brussels, Uecker went to art school and the Kunstakademie in the former German Democratic Republic, while Flavin and Judd studied art history and philosophy respectively in the US.

Their shared concerns are with objecthood, new materials, structure, surface, volume and light. In the context of this installation the monochrome relief surfaces of Castellani contrast with Uecker’s canvases pierced by nails, and Judd’s immaculate industrial objects. The work of Judd and Flavin converts space into ‘objects’. Both Castellani and Uecker explore the properties of the two dimensional surface by using nails to liberate the surface from compositional restrictions and create space and volume. Uecker and Flavin both share an interest in the use of light and incorporate light sources within their work. The connections between the four artists are manifold and
revealing.

In his seminal 1965 text ‘Specific Objects’, Judd wrote of an art that was ‘neither painting nor sculpture’, before including both Flavin and Castellani in his survey of the ground-breaking developments in the art of the time. The exhibition promises to be revelatory, setting emblematic works by Judd and Flavin in a European context and asserting the importance of contemporary innovations by Castellani and Uecker, two major European artists who have rarely been seen in London.