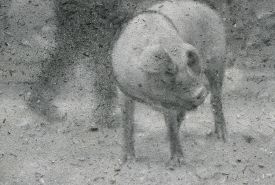 Zhang Huan Zhu Gangqiang No.4 2009 Ash on linen39 3/8 x 59 1/16 in. (100 x 150 cm) © the artist Courtesy White Cube
Zhang Huan Zhu Gangqiang 4th September – 3rd October
White Cube Mason’s Yard is pleased to present the first exhibition with the gallery by the acclaimed artist Zhang Huan. While known primarily for his performances in the early 1990s, which involved feats of physical and psychological endurance, his recent work has featured sculptures and paintings that explore themes of memory and spirituality and how these relate to Buddhist practice.

In May 2008, an earthquake reaching 8.0 on the Richter scale struck the Sichuan Province of China, killing more than 60,000 people. Amidst the tragedy, there was a pig that lived, trapped, for 49 days after the quake, surviving on rainwater, rotten wood and a small amount of foraged feed. His survival was hailed as a miracle and he was given the name ‘Zhu Gangqiang’ (‘Cast – Iron – Pig’). According to Buddhist scripture, 49 days is the amount of time that a soul remains on earth between death and transmigration. This pig’s fortitude resonated with Zhang Huan, who drew broad parallels with his own narrative as both outsider and survivor, while the drive to persevere and retain hope, even under extreme pressure, recalls the spirit of Zhang in his early performance art.

Using incense ash from Buddhist temples as his medium, Zhang Huan has created a series of paintings on linen honouring Zhu Gangqiang, along with a number of vanitas paintings featuring skulls. Both groups of work celebrate the fleeting, sometimes heroic, nature of existence and the quiet, inevitability of the life cycle.