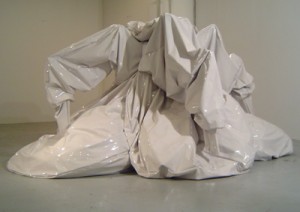 The series, Inkblot (2009), includes wall mounted geometric forms with black-mirrored surfaces. The top of each mass has been sheared, producing a shelf-like form that strictly delineates between above and below.
Underneath the plateau, crystalline abstractions accumulate to create an imposing Rorschach image. The rigid symmetrical landscape is punctuated with bulging rifts that slowly swell, either in a moment of expansion or deflation. As the forms slowly shift and redirect light they become hallucinogenic and unstable. They are sometimes landscapes, smoke, ships,heavy metal concert stages or balloons.

Other wall-mounted work include a sculpture entirely composed of black plastic strapping which creates a calligraphic line recalling the abstract paintings of Brice Marden and Cy Twombly. The piece is suspended between two facing walls, with a greater density near the walls and tapering out towards the middle of the room where the sides meet in a tenuous connection. The two sides slowly pull themselves apart and drift back together. This unfurled Gordian knot strains under the task of fusion and separation in an ambivalent tug of war.

Still works take the form of bloated bodies that creak and strain,endlessly moaning and muttering to themselves in an unresolved internal dialogue. These works couple the complexity of human behavior with the
ambivalence of a reduced gesture.