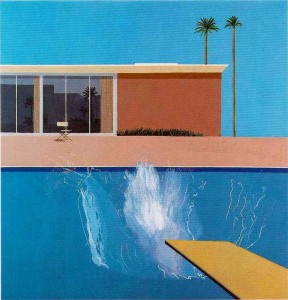 Nottingham Contemporary will open in November with more than 60 works by David Hockney, produced between 1960 and 1968. Alex Farquharson, the gallery’s director, said: “It was really me pondering the opening of Nottingham Contemporary and what the dream opening show would be. It really surprised me that a show like this hadn’t been done.”

The last show of its kind was a Hockney retrospective at London’s Whitechapel gallery in 1970. The Nottingham show will include one of the artist’s best known works, his Californian swimming pool painting A Bigger Splash (above). Farquharson hopes the exhibition will show how Hockney’s early work resonates with work produced today and how allusions to it can be found in work by a younger generation, including Elizabeth Peyton, Jack Pierson and Frances Stark.
Via (The Guardian)